Frozen yoghurt and gelato are having their hey-day, but let’s not forget our childhood favourite, the soft serve. We challenge Tuck Shop Take Away to make us a custom flavour for summer. 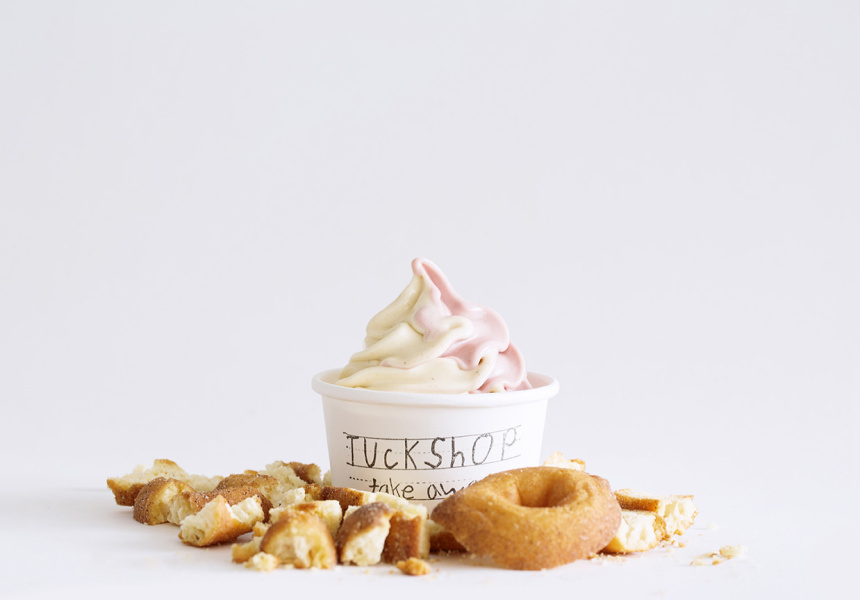 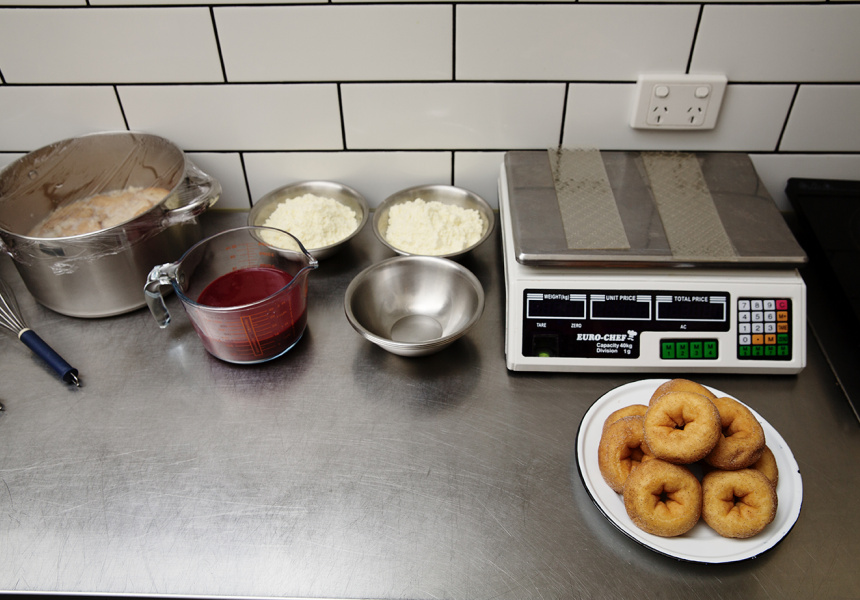 Six years ago, Karina Serex was sweating out 16-hour days at Heston Blumenthal’s The Fat Duck in Bray, Berkshire, UK. Now she owns Tuck Shop Take Away, a corner takeaway shop in Caulfield, with her husband, Clinton, where the pair also live upstairs with their two young kids. On Sundays, they close for family time.

The suburban 11-seater serves burgers, milkshakes and chips to a loyal following, and might seem like a world away from the pressure and prestige of one of the world’s best restaurants.

But spend some time in the shop and you’ll realise there is more to it than you first thought. The menu items might be common, but the techniques behind them are most definitely not.

Ganaches (whether it’s Milko, salted Fantale or Mintie) are made from scratch and precisely measured for each milkshake. Chips are thin, hand-cut and triple cooked. The cake counter is bizarre and imaginative – you’ll see chocolate ‘chip’ cookies (with potato chips), Redskin brownies, and banana-and-bacon biscuits (a Heston Blumenthal signature).

Don’t think you’re about to discover a local secret, though. If you amble up too soon to closing time, you’ll likely find it completely sold out of food. The loyal crowds aren’t typical dining enthusiasts – they’re parents with kids’ legs swinging over their shoulders, teenagers after school. It is what it claims to be – a local takeaway joint, just a very good one.

One thing the corner store has become known for is its soft serve, sucked from a shiny, double-barrelled machine that instantly freezes the creamy, house-made creations as you pull down on the lever. The repertoire, made from scratch by Karina, switches constantly – a theme of nostalgic Australiana its only consistent thread: Nutella on toast, musk sticks, lamington, Redskins.

We asked Karina to make us a flavour. After throwing around ideas such as fairy bread and baklava, we settled on hot-jam doughnut. Having never done it before, Karina warned us it could fail miserably.

In the tiny back kitchen (crammed with labelled tubs of categorised Allen’s lollies), we watched Karina write up an improvised recipe in whiteboard marker on the tiled walls and get to work over the stove. Here’s what we learned from a Fat Duck alumnus about making soft serve.

“It’s an ice cream. It’s not a doughnut. It’s cold, soft, creamy and smooth. You’re going to have to invoke something that makes you think of a doughnut. For me, it’s cinnamon and sugar.”

“I don’t think a Milky Way ice cream will taste any good. Milky Way is a texture – it’s about that fluffy nougat. But the flavour is milk chocolate. Melt that down into an ice cream and it is going to taste like a mild milk-chocolate ice cream. Same with baklava. It’s crisp and flaky. That’s a textural thing. You can’t translate something that is textural into an ice cream.”

If it Smells Good, it will Taste Good.

“First, I toast off the doughnuts in the oven. Aroma is really important. When an Indian recipe tells you to toast off your spices it will taste completely different to just dumping in raw cumin or coriander powder, because toasting releases those aromas. When you smell something, that translates into taste.”

“I’ve soaked the toasted doughnuts in milk overnight, so it infuses the flavours. We only use organic full cream. I had supermarket milk the other day – it’s just anaemic and watery. We use the Schulz Organic Unhomogenised – I have to shake before I use it because it has a big fat layer of cream on top. We’ll strain out the doughnut chunks, but the flavour will still be in the milk.”

“I’m putting the cinnamon doughnut mix (with a little milk powder, cream and extra cinnamon and sugar added) in one side of the machine, and the jam flavour in the other. I’m using raspberry puree, not jam. Jam is just raspberries and sugar – and I don’t know how much sugar is in there. We want to put our own sugar in, so we can control it. Then we’re going to heat it.”

When the mixtures have been poured into the machine, Karina and Clinton’s five-year-old, Sasha, emerges shyly from upstairs.

“She’s my greatest critic,” Karina says. Sasha’s favourite so far has been musk. Pretzels and beer got a brutal thumbs down.

She waits patiently for her own two-toned treat, and takes a thoughtful spoonful. She’s not effusive in her praise, but she does offer a quiet nod of approval.

“How many kids can say they have a soft serve machine in their house?” Karina asks. “It’s pretty awesome.” We try it next. It’s amazing. We know we’re dipping a spoon into something cold, soft and creamy, but another part of the brain thinks we’re actually at Footscray station, biting into a hot jam doughnut.

The doughnut side is flecked with tiny specks of cakey-doughnut that survived the sieve. The twist of raspberry (which came out a muted purple colour) tastes bold and bright, countering the warm cinnamon with something both tart and sweet.

Karina peels off a “Hi, My Name Is... ” sticker, writes “Jam Donut” in black marker and presses it onto the soft-serve machine. “Winner.”