A fixture of Australia’s specialty coffee scene, the team has funnelled all the learnings of the past nine years into this new spot – just a couple of hundred metres from the Fitzroy original. 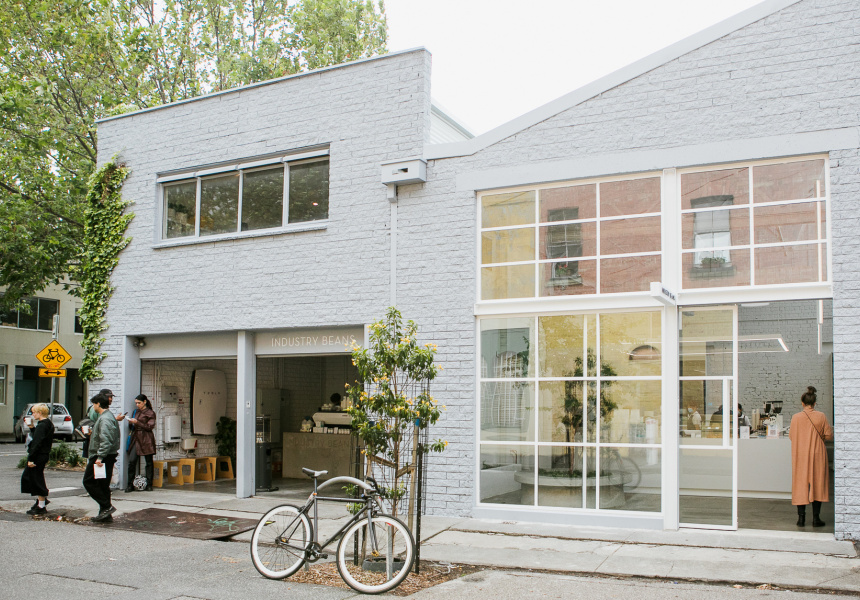 Though Industry Beans has expanded rapidly since its inception – now with three cafes in Melbourne, two in Brisbane and one in Sydney, plus a thriving wholesale business – it had no intention of abandoning Fitzroy when the nine-year lease on the OG location ended.

Six months since the closure of the Rose Street spot, the team has opened a new Melbourne flagship just a couple of hundred metres away.

“This is sort of full circle,” owner Trevor Simmons tells Broadsheet. “We’ve been able to bring in all the learnings; all the things we didn’t know nine years ago.”

In a large, skylit warehouse designed by local architects March Studio, it’s much lighter and brighter than its predecessor. And in line with its sibling venues, white is the dominant colour throughout, though recycled-timber tables and foliage break up the palette.

The focal point is the slick Modbar machine, equipped to make up to five coffees at a time. Beyond it, big windows give you a glimpse into the roastery, where the team produces beans as well as canned and bottled coffee products. You’ll find them stocked in the cafe’s tasting and retail area alongside a selection of at-home coffee making supplies.

In-store, the coffee menu mirrors what’s on offer at the cafe’s other locations, with an emphasis on single origins. “We've found that sweet balance where we’re showcasing five or six different coffees,” says Simmons. “They’ll be changed every four weeks across all our stores.” There’s also a take on bubble tea with cold brew and coffee-soaked tapioca pearls.

The all-day food menu will also change regularly, though all recipes are pulled from a master menu that Simmons has spent the last nine years developing.

For brunch, find pandan bubble waffles with blueberry gelato and sesame brittle; folded eggs with sous vide barramundi, native succulents and mango-coffee togarashi; and porcini-dusted poached eggs and wild mushrooms served in a delicate bed of shredded fried potatoes. “We were trying to create the aesthetic of a bird nest,” says Simmons.

“We’ve got a larger lunch menu than we did down the road, partly because the kitchen there was pretty tight,” says Simmons. “It’s definitely a more sophisticated version of what we’ve done before.”