So, You Think You Can Toastie?

Some of Melbourne’s best chefs share their secrets to killer grilled cheese. And you can battle it out against them at Say Cheese Festival’s Grilled Cheese Invitational – if you’re game. 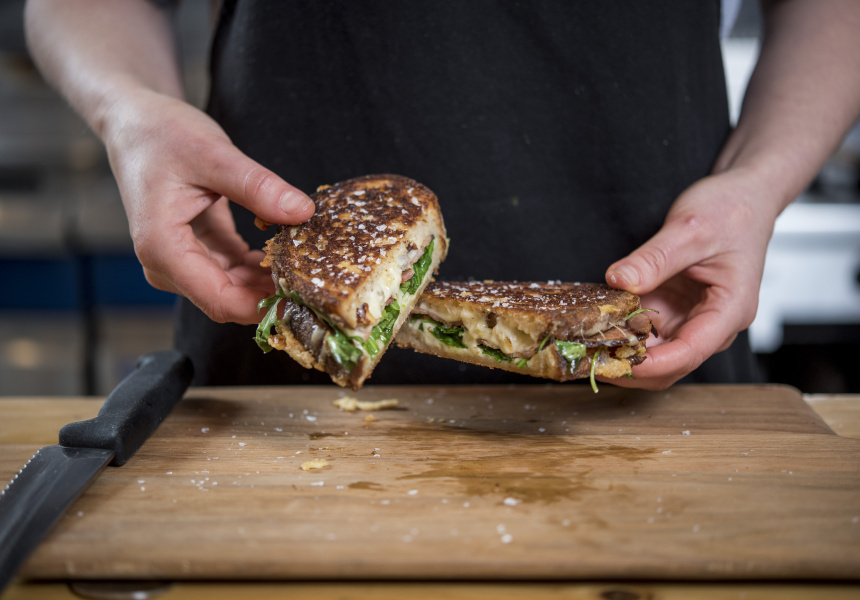 For a humble meal, the toasted sandwich is remarkably versatile. Two slices of bread and a bit of imagination is all you need to create a culinary masterpiece. You can go nuts with fancy cheese or simply throw in a few slices of processed American cheddar. Then there are your non-lactic ingredients. Whack in some thick-cut bacon or grate a bunch of truffles over the whole damn thing – the choice is yours.

If you fancy your skills on the sandwich press, you can compete in a toastie battle against some of Melbourne’s best chefs – including Longsong’s David Moyle, Tonka and Coda’s Kay-Lene Tan, Victor Liong from Lee Ho Fook and Christy Tania of Glacé – at the Say Cheese Festival’s Grilled Cheese Invitational.

Ahead of the event, Broadsheet asked judge Anthony Femia from Maker & Monger for his best toastie tips. We also asked the competition, just to even the playing field.

Check them out below – and get grilling.

“Cheeses like Gruyere, cheddar, provolone, Emmental, fontina and scarmoza are amazing at maintaining flavour, texture and ‘the vital stretch' when melted. Cheeses to avoid are gouda and aged parmesan which separate into clear liquid fat and clumpy proteins, as their pH is not suitable for melting.”

“Avoid using sliced tomatoes in your toastie or jaffle as these are always piping hot when the toastie is ready. I’ve suffered many burnt tongues from being too eager to eat the tasty morsel before the tomato had a chance to cool down.”

David Moyle – Longsong
At David Moyle’s CBD “not-just-a-bar” Longsong there’s only one piece of cooking gear – a woodfired grill. But he still knows his way around a sandwich press. For Moyle there are certain ingredients that simply cannot be left out of a good toastie.

“If the toasted sandwich doesn't contain either raw onion or mustard than throw it away. Bonus points for use of both,” he says. “Don't forget the pickle or there will be blood”

Christy Tania – Glacé
When she’s not devising diabolical challenges on Masterchef Christy Tania is concocting inventive sweets at her Windsor dessert bar. She suggests thinking outside the box and breaking down the toastie into its component parts.

“Think of what makes a toastie so enjoyable. Is it the crunch or melted cheese? Is it the creaminess? Is it the acidic accompaniments like mustard, or even jams? What should be the crunch component? Can it be replaced with puff pastry for example? The tangy part: can we use yuzu or lemon?”

“A really great grilled-cheese sandwich simply needs good thick-cut brioche bread, some delicious stretchy unctuous cheese, and a lot of quality butter,” she says. “You can never have too much butter.”

Victor Liong – Lee Ho Fook
In his minimalist home kitchen, Lee Ho Fook chef Victor Liong has done a fair bit of experimenting to get the perfect goo-to-crisp ratio on his toasties.

“Spread mayonnaise on the toast side, outside of the toastie, before you put it in the pan. The fat from the mayonnaise will brown it super evenly, and won't tend to burn as fast as butter. It's also much easier to spread,” says Liong.

“Another tip I really like is to cover the toastie with a lid while it cooks. This ensures the whole sandwich is being heated and the core temperature rises at a similar rate as the outside cooks, giving the cheese a melt-y texture that’s paramount to a good cheese toastie.”

To get some inspiration for your entry try Toasta’s recipe for The Fonz, loaded with duck fat, bacon and truffle oil.