• Turning four years of anticipation into action, Chris Lucas’s Society emerges as the culinary tour de force we were expecting.

• Bar Romantica’s ripper lockdown 5.0 takeaway pivot, The Pizzetta Shop, is sticking around. Because there should be no end to tiny pizzas topped with great big balls of burrata.

• There’s no rudimentary parma at the reborn – and reimagined – Penny Black, now Penny’s. Instead: a pork rib-eye katsu the size of your face. It’s panko-crumbed and crisscrossed with Kewpie and katsu sauce.

• For two days only, North Melbourne’s Beatrix is doing a limited-edition babka with peanut-and-chocolate butter courtesy of Pic’s and Whittaker’s.

• Register to try Heston Blumenthal’s off-menu burger collab. It comes to your table under a smoke-filled cloche (of course).

• “The current Covid-19 restrictions do not allow us to run the program in its intended format”: Melbourne Food & Wine Festival postpones its winter edition.

• Coming soon: The Keys, an enormous, nostalgic “leisure centre” – with three bars, 12 retro bowling lanes and room for 650 punters. It’s by two of the guys behind Dexter, Takeaway Pizza and Dom’s.

• Recipe: the golden rule you must follow to make the best hummus of your life, according to one of the country's best Middle Eastern chefs. 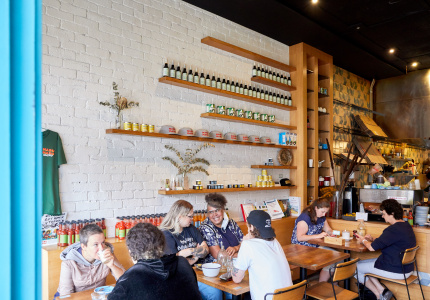