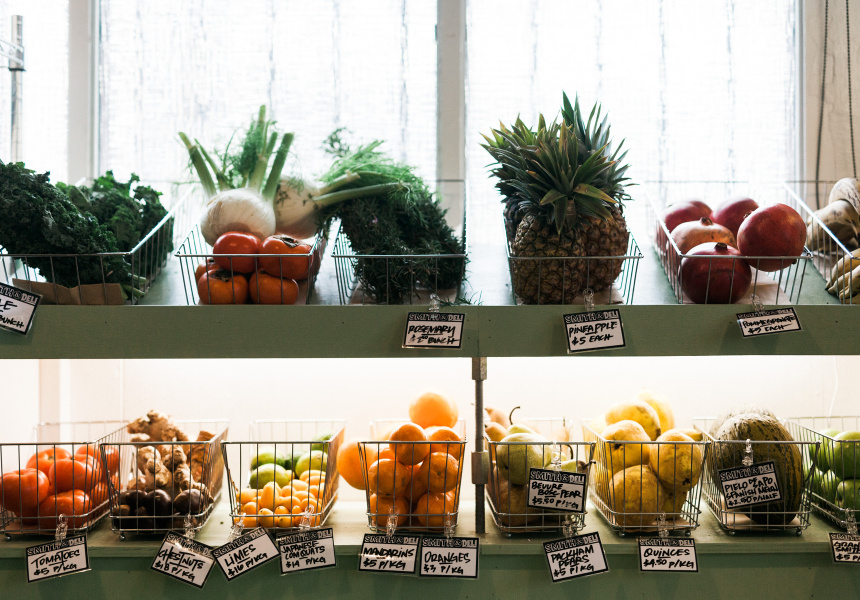 “If you looked in here, and you didn’t notice the sign, you would think you were just walking into a deli,” says Shannon Martinez. “And that’s our whole thing.”

Martinez is the chef behind Smith & Daughters and now, Smith & Deli on Moor Street, Fitzroy. Yes, it’s a deli. And yes, it’s also completely vegan. But leave every tired cliché that conjures for you at the door.

Smith & Deli is loosely based on a traditional New York-style deli. But traditional this is not. This is meticulously thought-out vegan food with the attitude and spunk that anyone who has been to the nearby Smith & Daughters – co-run with Mo Wyse – will recognise. It is welcoming, playful, considered, convenient and totally badass.

“I just want people to have an awesome shopping experience. I don’t want it to be a fancy shop,” says Martinez. “I want it to be a place where finally vegans, vegetarians, people who can’t eat dairy – or whatever – can come and buy beautiful things.”

You can stop in on your way to work for a coffee and a pastry/bagel, or on your way home in the evening for a bag of pasta, a jar of sauce or a lasagne to whack in the oven for dinner. Or come for lunch for a sandwich, soup or a salad. It also does lunch boxes.

The glass cabinets are filled with fresh buffalo mozzarella, pastrami, turkey, pretzels and pickles. The challah sticky buns are perfectly chewy and gooey. There are also doughnuts, vegemite-and-cheese scrolls, tarts and pain au chocolate. And of course, there’s the holy grail of vegan baking: buttery, flaky croissants. “Croissants were definitely the hardest thing to get perfect,” says Martinez. “They are such a staple. People know and recognise the flavour and the texture.”

Sandwiches here are a big deal. The Ruebenstein is piled high with pastrami, sauerkraut and pickles between slices of rye and covered in Russian dressing. The Eggsorcist (I Can’t Believe It’s Not Egg Salad with shredded iceberg); the Free Willy (tuna salad with shredded iceberg); and the Little Havana (pressed Cuban ham, roast turkey, mozzarella, pickles, cheddar, dressing) are just a few of the others on the board. It also does sandwiches to order. Salads and soups will rotate everyday.

“We’ve got some – what some people would consider – unusual ingredients on the shelves,” says Wyse. “We did that because Shannon wants to teach people how to use them. There are a lot of the Mexican and Spanish things. No one else would have cans of hominy.”

This aspect might be the most exciting thing about this new shopping and eating destination: access to the chef behind everything in the cabinets and most of what’s on the shelves. “Of all the things about being a chef, my least favourite is being stuck in the kitchen,” says Martinez. “I want to be out the front to talk to people and shop with them and tell them how to make something. You can come in with your recipe and show me, and I’ll get all your stuff together for you!”

The fit-out references a retro, mum-and-dad-style corner shop, but it too has the Martinez-Wyse edge. It’s fun, polished and filled with elegant elements, such as the hand-painted signs, the handmade light boxes above the serving counter and the World-War-Two-era-hospital-green paint job. The uniforms are crisp, professional and super cute. It all references something vintage but is completely new and modern. Much like the idea of eating a vegan pastrami sandwich followed by a cream-filled doughnut. Sure, Smith & Deli’s vegan, but it can be loved by anyone.