There’s a Bloody Mary garnished with a slider, cinnamon-dusted pulled pork doughnuts and popcorn chicken (with actual popcorn) at this Americana-inspired diner. 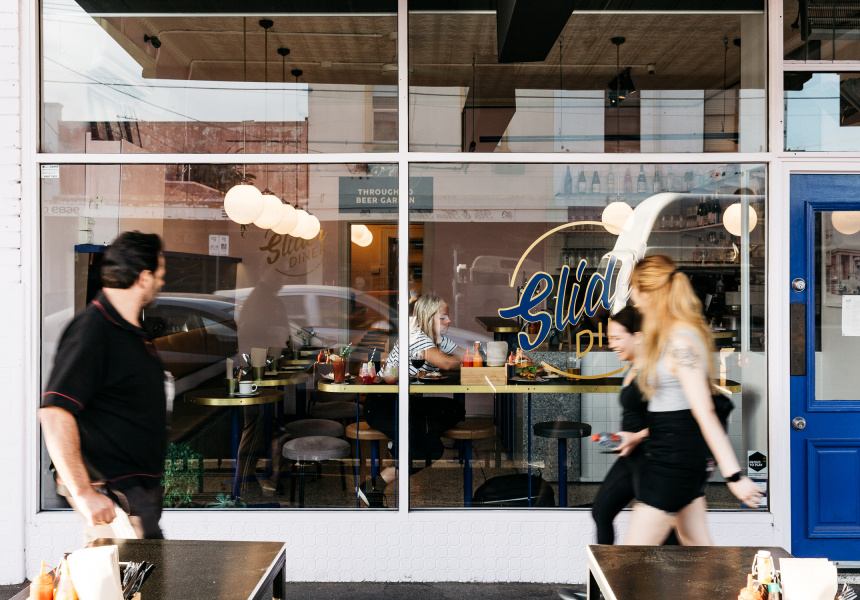 The food truck life is, by its very nature, a transient one. Since getting behind the wheel of his first Sliders on Tyres truck in 2013, Owen Scungio and his small fleet of mobile mini-burger carts have travelled to music festivals, parks and weddings: essentially any place where hungry people line up.

But Scungio has now finally found a permanent parking spot (don’t worry – the trucks will continue to roll) in the booming suburb of Seddon in Melbourne’s west.

Coming from a more formal dining background (he apprenticed at Hyatt Hotel Canberra and worked at Vue de Monde during its Carlton era), trucks were never going to be the end of the road for Scungio.

“I wanted to do my own place, that’s always the end goal as a chef. And I needed to work out a way to get the funds … I saw the trucks as an entry in a way, to get my own business at a cheaper pricepoint,” says Scungio.

The Seddon location, called Slider Diner, has been spruced up in the style of a ’50s American diner – think brass-edged tables and pale pink walls that evoke a Happy Days-era of counter meals and malt shakes. There’s a beer garden at the back with a massive Pulp Fiction mural, which you can enter from the dead end street behind it.

The move indoors was never intended to scrap the Sliders on Tyres menu - Scungio has kept what worked well on the road. There’s the classic cheeseburger (with its cold-smoked American cheddar and house-made sauces) and the Fisherman (tender calamari, lettuce and lemon mayo).

While burgers are the main attraction on the menu, expect some new dishes and a few variations on American comfort food. Popcorn chicken is reinterpreted with actual popcorn scattered among the fried bird. The Kim Cheezy is a slider with buttermilk fried chicken and kimchi slaw, doused with spicy gochujang sauce. But Scungio’s American-comfort fusion might be best realised in his pulled pork doughnuts: inspired by sugary sweet Chinese pork bun dough, Scungio takes slow-cooked pork shoulder, fries it in doughnut batter, rolls it in cinnamon sugar and finishes it with a coating of bacon dust and barbeque sauce.

This article first appeared on Broadsheet on March 13, 2019. Menu items may have changed since publication.