Order the handmade soba at Shimbashi and don’t be afraid to slurp. You’re meant to. 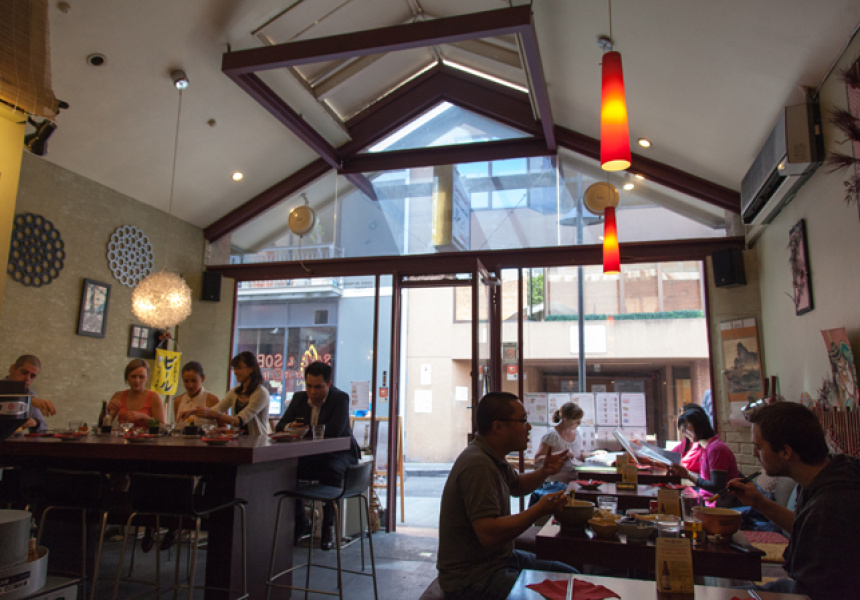 Just off the Parliament end of Bourke Street, on Liverpool Street, lies Shimbashi Soba and Sake Bar, a Japanese restaurant that was opened a few months back by chef Taka Kumayama. The space used to be occupied by the equally cosy Japanese restaurant Aka Tombo.

Under the guidance of Kumayama, Shimbashi specialises in dishes of handmade soba noodles, served simply as they are meant to be. The chef makes and cuts the buckwheat noodles entirely by hand each morning, the chef often grinding the Tasmanian buckwheat in-house in the stone flour mill in the shopfront.

Kumayama was the student of soba master chef Yoshinori Shibazaki, who opened Ju Ge Mu & Shimbashi, the first soba restaurant in Sydney, in 1994. ‘Soba Master Shibazaki’, as Kumayama’s teacher is known, has since moved back to Japan after selling his Sydney business and another soba bar on the Gold Coast.

The soba is either served in a variety of miso-based broths, or chilled with a small bowl of spring onions and ‘tsuyu’, a salty soy-based dipping sauce for the noodles. The idea is to dip small amount of the soba into the small bowl of tsuyu and to slurp up the noodles. Don’t worry about slurping – the Japanese say it makes you experience the silky feel of the noodles better.

The decor hasn’t changed much since Aka Tombo days, with cushions strewn about on seats on one side of the room and the high communal table on the other side. On the way in, you’ll be greeted by a cheerful Japanese waiter and will promptly be served with a small dish of complementary ‘horenso no ohitashi’, a dish of chilled blanched spinach in dashi and soy with a sprinkling of bonito flakes on top.

To drink, try any of the sake or umeshu (a fruit-based sweet liqueur) cocktails or try the sweet nigori sake, a type of unfiltered sake with the rice sediments left in.

For something to take home, there is a little stand selling Soba So Good, a book by the Soba Master Shibazaki himself.