Bars are getting too serious. Michael Madrusan’s new city venue is about quick and good cocktails, loud rock‘n’roll hits and a ripping vibe. 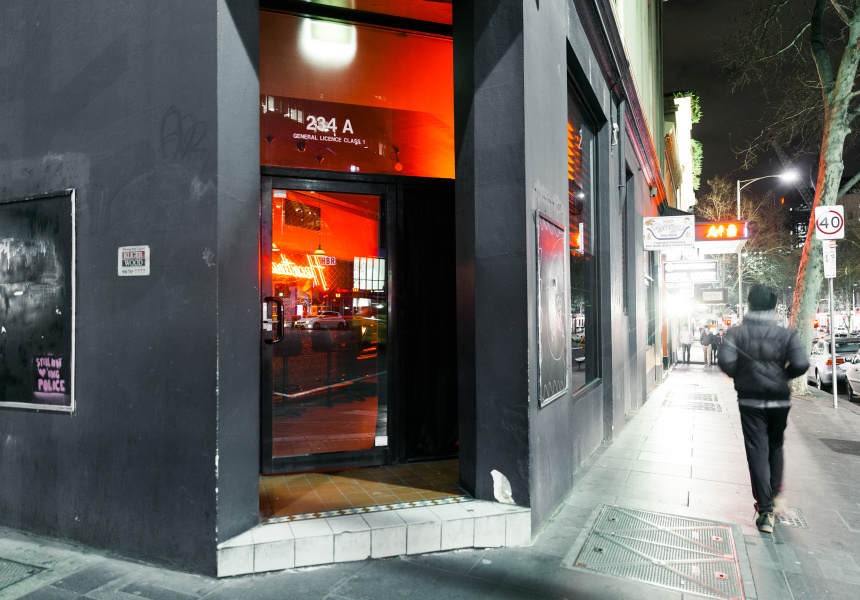 For a long while, Melbourne’s bars had a thing about hiding away – especially in the city. We’re conditioned to think that traversing back-alley bluestones, climbing rickety stairs and ringing a bell means we’ll end up in a better bar.

That’s why it would be easy to bypass Heartbreaker completely; a hulking, black-painted pub on the corner of Lonsdale and Russell, with a glowing cherry-red neon sign showing through its slatted windows like a giant hearth. It’s so obvious, you could miss it.

Welcome to the bar of Michael Madrusan’s fantasies: both an alter ego and kindred spirit to The Everleigh, his fine-cocktail establishment in Fitzroy.

If you’re drinking cocktails, there are four to choose from: Negroni, Martini, Old Fashioned and Manhattan; what Madrusan calls “the famous four”.

“We’re champions of traditions,” he says, something he believes connects the seemingly opposite Heartbreaker and The Everleigh. “We take the classics and do them in the best way we can.”

“Those are four of the most important cocktails, not only today, but in time. The Manhattan, for example, is from 1862 and we’re still drinking it today. It’s such an amazing piece of history.”

The cocktails are pre-batched at The Everleigh by Madrusan and partner Sebastian Reaburn (founder of 1806 bar). It’s no small undertaking – they’re currently hand-bottling 1000 Negronis a week.

The pay off is that they’re poured for you in about the time it takes to read this sentence. Bottled cocktails mean you never need to wait more than a couple of minutes for your drink, plus it leaves more time for you to shoot the shit with your bartender before they serve the next customer.

There is a selection of unusual craft beers and ciders via Australia, the States, Denmark (“they’re doing really great beers”) and New Zealand, plus a well-stocked back bar. Rare spirits and bottled cocktails are available to take home until 11pm. There’s a kitchen on-site, too, where “big things will be happening in a month or so”.

This is a bar that’s sure of what it is down to every last detail: from the padded bar counter’s edge that invites you to linger and lean, to the warmly lit red pool table in the back room, and the jukebox loaded with close to 100 full rock albums (no greatest hits) from around 1968 to 1980.

As Madrusan puts it: “I wanted a bar where, when every song came on, someone would lift their head and go, ‘I love this song!’” You’ll hear anything from Fleetwood Mac to Iggy Pop and Blondie; and around midnight the volume kicks up a couple of notches.

“I’ve had this bar in me for a long time,” Madrusan says. “I’ve loved the name forever. I would have cried if there were another Heartbreaker bar. I had to do it.”

Liquor to-go is available daily between 5pm and 11pm.