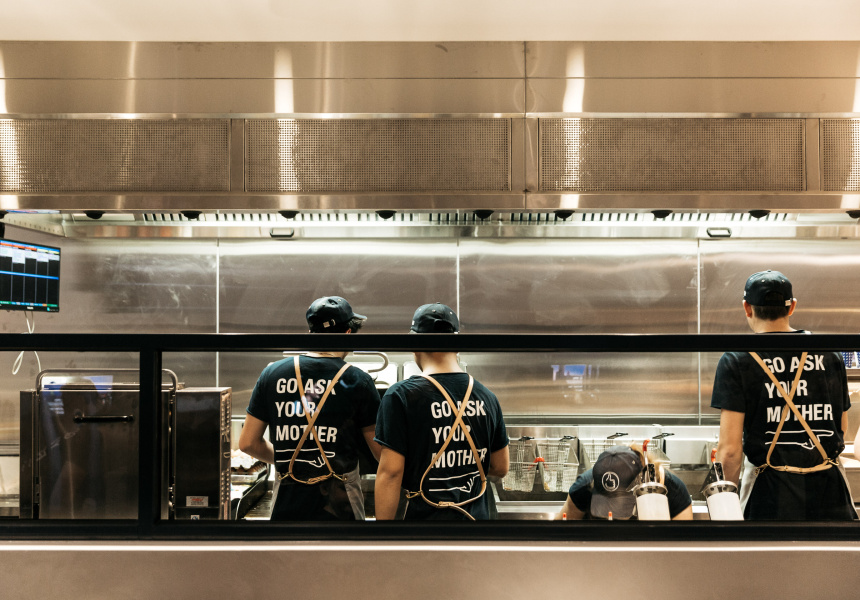 Admittedly, there isn’t exactly a burger shortage in Melbourne. But Vue de Monde’s Shannon Bennett reckons there is no other burger chain whose ingredients are all organically or ethically produced: “To my surprise, there was no burger cheese at all made in Australia,” Bennett says. “I couldn’t believe it. That yellow burger cheese you get contains palm oil and food colours.”

With the help of Shulz Organic Milk and Pure Dairy in South Melbourne, 2.2 tonnes of organic cheese was made for the sole purpose of being slapped between Benny Burger’s house-made organic milk bun.

“It’s still fast food, and I’m not claiming it to be healthy but I’d like to be involved in cleaning up the industry,” Bennett says. “Everything we produce is Australian, or where possible, completely local.”

Beef patties from organic Queensland farm, Arcadian Meats might form your classic cheeseburger with pickles and sauce (for under $9) or the true-blue Chang burger, with fried egg and beetroot, throwing some ‘Strayan shade on the Momofuku chef who suggested Aussies don’t know burgers. There’s a chicken, line-caught Barramundi, and a vegetarian beetroot-chickpea burger too.

If you’re feeling bold, try the monthly Mystery burger, where the ingredients are a surprise until you open the (sustainably packaged) box. It’s a risk worth taking when chefs from the Vue Group decide the ingredients. Chips arrive sans the 19 chemicals found in some others.

Local agency Mim Design (responsible for upscale projects such as the Sheraton Mirage in Port Douglas and Luminare in South Melbourne) handled the fit out, where the brief was also focused on sustainability. The tables are made from restored Atari Pac Man machines, which are fully operational while holding a burger. If it looks a little stark, it’s because a giant mural from street artist Mayonaize is still to come.

Five “concretes” will satisfy the sweet tooth, and are essentially whipped frozen custard with chocolate brownie or salted caramel. There are also organic shakes, breakfast burgers, and even bottled Lui bar cocktails.

Drop in on Saturday for a free burger (for the first 100 through the door) and tunes from hirsute local rockers, Kingswood.

Meanwhile, locations on St Kilda Road, Collins Street and Flinders Lane are in the works.