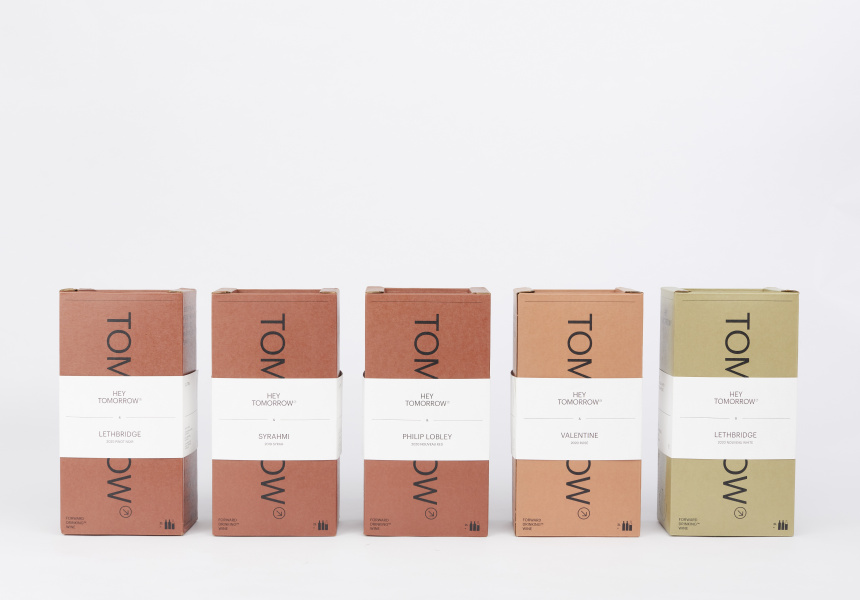 Fancy goon sacks became an essential picnic accessory last year. But a newcomer has hit the market just in time for those caught up in Victoria or Sydney’s lockdowns to replenish their wine stocks.

Hey Tomorrow is a new Melbourne wine brand doing two-litre wine casks that look a helluva lot sexier than fruity lexia – and taste absolutely nothing like it.

It’s by Tigerbird International, which is behind Melbourne restaurants Bomba, Añada and Nómada, as well as wine merchant Samuel Pepys.

“Several years ago, a fairly boring essay on wine packaging got us thinking,” co-founder Shane Barrett tells Broadsheet. “BIB (bag in box) seemed to be by far the best packaging option for early-drinking wine.

“These advantages came into sharp focus when we were pregnant with our second child. A full bottle of wine was no longer possible to finish, even over a few days. The wastage started to really bother us.”

The team says casks are good for up to 28 days after they’re opened – great if you’re looking to stretch out your vino consumption. And they won’t be an eyesore in the meantime.

“We partnered with [Melbourne graphic designer] Motherbird Studio to create something as far removed from the BIB of old as possible,” Barrett says. “We wanted something that people would be happy to display in their kitchen, a bit like a fancy magazine or book on a coffee table.”

The first range includes a crisp, smashable white blend and a silky pinot noir made in collaboration with the Bellarine Peninsula’s Lethbridge Wines; a fresh and floral Yarra Valley rosé; a juicy, easy-drinking red field blend; and a dinner-party-perfect syrah.

There’s also an environmental aspect to Hey Tomorrow’s approach. Fifty per cent of its profits go to supporting Aussie farmers reduce emissions and draw down carbon via the Carbon Farming Foundation.

The wine casks cost $50 to $75 and are available online for nationwide delivery. (They’ll also be on the wine lists at Bomba and Añada when Melbourne restaurants reopen.)