On Monday, house-made spaghetti with pecorino fondue and truffle butter. Tuesday, traditional bowls of bucatini with tonnes of pepper and pecorino chunks. By Sunday, this writer had almost had enough. But she powered through. 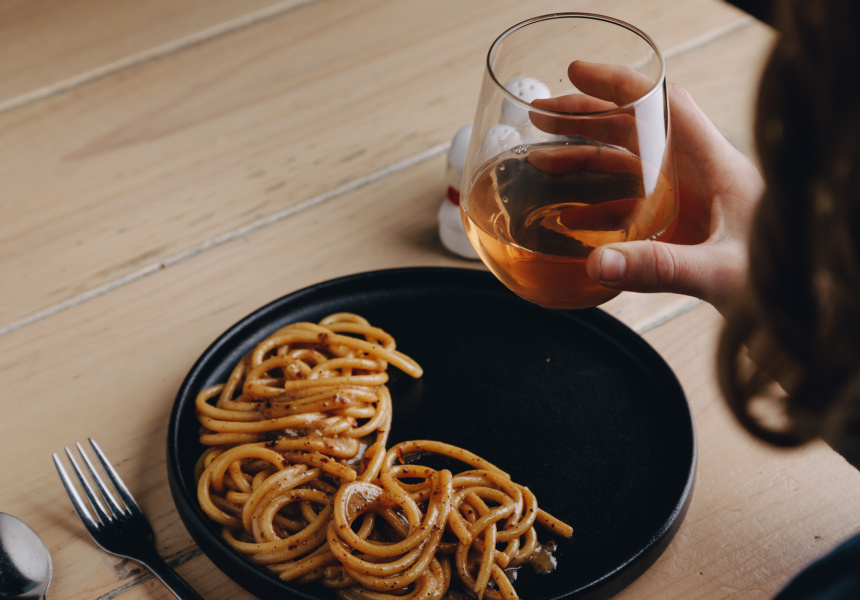 In the words of the great chef, journalist and documentarian Anthony Bourdain: “According to Romans, there’s good cacio e pepe, adequate cacio e pepe, and everything else, which is of course a sin against God”.

In Melbourne right now, thankfully, there’s plenty of good cacio e pepe. The Roman pasta dish (“cheese and pepper” in Italian) is having a moment, popping up on menus all over the city.

With only three, sometimes four ingredients, it’s a dish that inspires reverence when done right. Pasta (often tonnarelli or bucatini) is tossed with the cacio (usually pecorino or parmesan) and pepe (black pepper), with some starchy pasta water to bind it all together, and maybe a little butter. The result is a gloriously cheesy emulsion that transcends its base elements.

Despite being a classic, it’s not just old-school trattorias serving it up. Instead, you’ll find versions of the dish – some traditional, others less faithful – at some of the trendiest tables in town. We tried out a different version every night for a week. It was hard work, but someone had to do it.

Monday: Pentolina, CBD
If you’re a purist, Pentolina shouldn’t be your first stop. All of the classic cacio e pepe elements are here, just in very different guises. Owner Matt Picone’s (formerly Pellegrini’s) take is a pecorino fondue – a foamy concoction made from pecorino romano and fresh cream – with a twist of house-made spaghetti and shavings of black Italian truffle on top. Sit at the pink marble countertop and watch the chefs put it all together with a generous glug of oil, a pinch of salt, pepper and lashings of truffle butter, all tossed vigorously in the pan with metal chopsticks. Then, even more pecorino to finish it off.

Tuesday: Bar Liberty, Fitzroy
Casey Wall, chef and co-owner at Bar Liberty, is familiar with excess. On a trip to New York last year he crammed in 26 meals in six days. In contrast though, his recipe for cacio e pepe is restrained, stripped to the bare basics – pecorino, black peppercorns, olive oil and always dry (never fresh) pasta, which Wall reckons clings to the sauce with more fervour. Wall says his recipe is true to the first one he tried at Lupa in New York many years ago. It leans more towards pepe than cacio, with tonnes of black pepper and the odd pecorino chunk strewn amongst the bucatini strands.

Wednesday: Cutler & Co., Fitzroy
Dining at Cutler might seem like a formal affair, but the front bar is reserved for a more casual experience. Demand for chef and owner Andrew McConnell’s cacio e pepe was so strong it’s gone from a menu special to a permanent fixture.

Tiny, bright yellow envelopes of agnolotti hold house-made ricotta, fragrant with lemon zest, and come covered in a smooth, classic cacio e pepe sauce. The sauce is sometimes made with pecorino, sometimes Parmigiano-Reggiano, depending on what Victor Persinette Gautrez, the cheesemonger at Spring Street Grocer, has supplied for the day. More fluffy shavings of it finish the dish. It’s delicate and hearty at once.

Thursday: Smith & Daughters, Fitzroy
“Why did you bring me to the vegan one?” my dining companion complains as she clocks the neon cross (the words “EAT” and “VEGAN” intersecting) on the wall at Smith & Daughters. But she eats her words as quickly as she does her share of the pasta.

Shannon Martinez’s ability to make vegan things taste un-vegan is undeniable. There’s no cheese here, but you’d be forgiven for thinking there is. Instead, chunky laces of bucatini are tossed in a sauce flavoured with faux parmesan (made from coconut) and black garlic. The pepper element is twofold: a black pepper from Kampot, Cambodia, and a less intense white version that provides a slower burning, secondary kick of heat. There’s a real umami quality to the sauce, a funk that’s uncannily reminiscent of real cheese.

Friday: Park Street Pasta & Wine, South Melbourne
Recently, head chef Angus Cadden decided to switch out bucatini in his cacio e pepe for mafaldine, a chunky ruffled pasta from Naples, which the kitchen makes daily. It may not be traditional, but it still feels suitably Roman – piled into a big ceramic bowl, the texture is reminiscent of tripe alla romana – and it’s an excellent vehicle for the sauce, which gets trapped in the curly ridges of the noodles. The pasta pushes the limits of al dente here, with plenty of bite, and the sauce contains a respectable amount of pepper. It’s finished with a downy blanket of shaved pecorino, so dense you can barely see the pasta underneath.

Saturday: Cucinetta, South Yarra
At 29 square metres, dining at Cucinetta really does feel like you’re in someone’s kitchen. Three times a year, the cosy diner holds cacio e pepe week, where the dish is served from a giant Parmesan wheel. It’s always a sold-out event. The last stint was extended to a month, and it was still tough to get a booking. The team here had little choice but to add cacio e pepe to the menu full time.

The theatrics have been toned down – the parmesan wheel has been replaced by a smaller pecorino one – but you can still watch the chefs expertly toss the pasta and pile it straight onto your plate. Silky strands of house-made spaghetti cling to each other with cheesy abandon. The pepper is not insubstantial, but this is the version you want if cheese is your priority. For an extra $3 you can add shavings of fresh truffle, too.

Sunday: Estelle, Northcote
Estelle’s cacio e pepe involves pecorino, but that’s about as much as it resembles the original. Owner Scott Pickett and head chef Valentin Barrère are serving elegant plates of 11 hand-rolled tubes of macaroni with a thin but powerful sauce (almost like a cacio e pepe essence) poured all over. It’s finished with fried saltbush and large shards of house-cured guanciale, which shatter like the top of a porcine crème brulee, and a delicate, fleeting pecorino foam – pecorino rind, butter, shallots, white wine – that evaporates soon after it hits the plate.