Its new boxed set includes 40 illustrated recipes from Capitano, Marion, Bar Saracen, Very Good Falafel and more from around Oz. Two-thirds of proceeds go to the restaurants so you can help support your favourites. 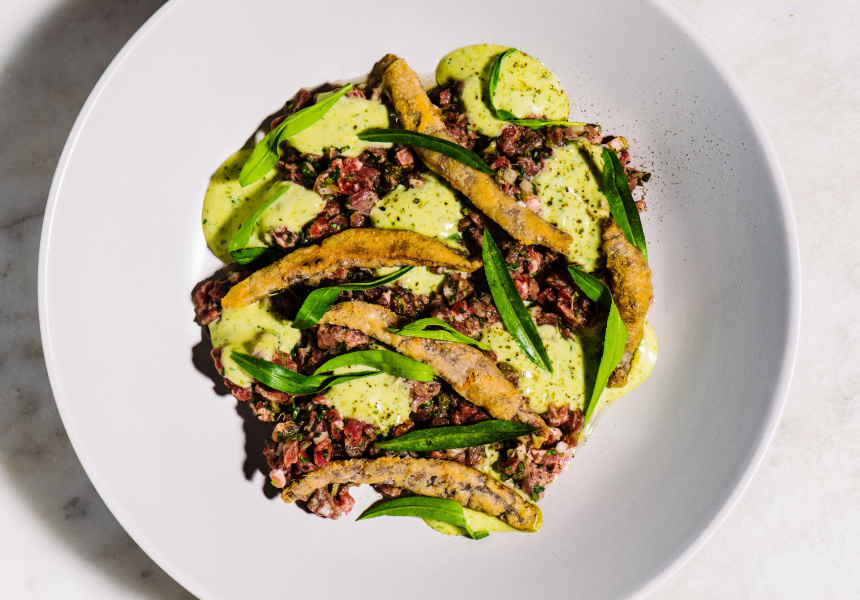 Last year saw artists and creatives doing their part to help the hospitality industry, from beautifully designed posters and “crap drawings” of good food to colourful cookbooks and an Instagram account of illustrated Asian dishes.

Its $15 vintage-inspired recipe journals were digital-only (you can choose to print them out or read off your device), but it’s now gone analogue for the first time.

Cartilage’s debut boxed set features 40 recipes from 10 of its most popular journals to date, all printed on full-colour recipe cards with illustrations and annotations from the venue’s chefs and owners.

“Ever since Cartilage launched as a digital project, we hoped that one day we’d be holding a boxed set of recipe cards in our hands – one that you could flick through, make notes on and cook from on [top of] your kitchen counter,” Matthews tells Broadsheet. “With this release, that hope has become a reality.”

The set features four recipes each from Melbourne’s Capitano, Bar Saracen, Marion and Very Good Falafel. There's also recipes from Sydney's A1 Canteen, Golden Century, Mary’s and Tio’s Cerveceria, as well as ones from Port Cygnet Cannery in Tasmania and Bar Rochford in Canberra.

That means you can cook the raw beef with fried anchovy and tarragon from Marion; Very Good Falafel’s very good sabich; the standout hummus with spanner crab and king prawn by ex-Saracen head chef Tom Sarafian; Capitano’s chewy foccacia and more, plus display the cards at home.

And as always, two-thirds of proceeds from the set goes directly to the restaurant owners and chefs, whom the Cartilage founders recognise as the rightful owners of the recipes. Since it first launched in June 2020, the initiative has raised more than $20,000 for venues across the country.

“We see it as a snapshot in time of Australian restaurants – something to cook from today, tomorrow and years from now, and to look back on with memories of the people and places that have been,” Matthews says.

The Cartilage boxed set costs $80 and is available to purchase here.