Why is everyone so worked up about raw-milk cheese? 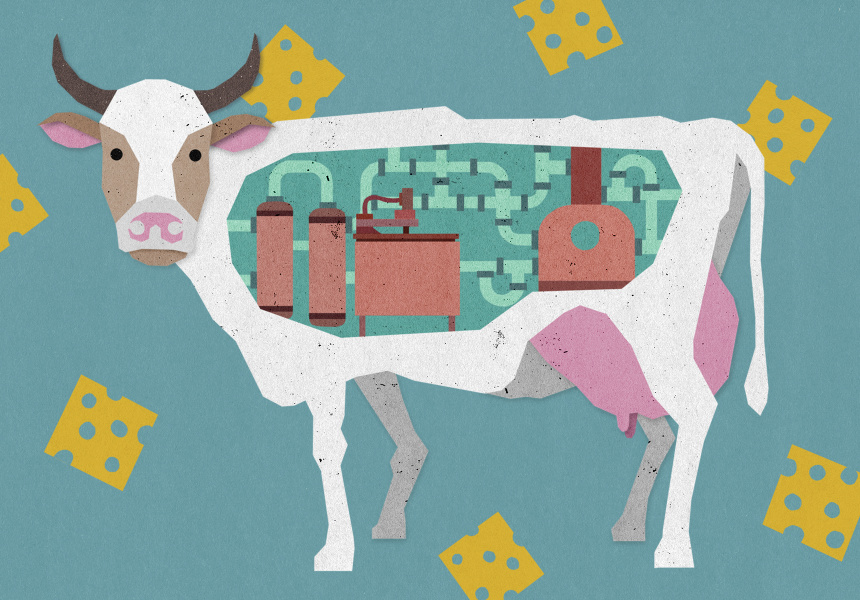 Will Studd believes in cheese. So much so that in 2002, Studd fought the law by importing 80 kilograms of illicit, raw-milk roquefort. Back then, judges decided it contravened health regulations, and Studd was forced to bury the forbidden fromage in a public tip. But a recent change in regulations has officially opened the floodgates of stinky, mould-ridden and totally delicious cheese, and not only from France.

The crux of the issue is pasteurisation. By superheating milk (or beer, or sake, or anything else) you can kill a large amount microbial life, including pathogens that make humans sick. But admirers of traditional cheesemaking techniques believe that those microbes are in fact the true expression of a cheese’s terroir. Killing microbes kills flavour.

“When an animal chews on grass, it makes milk which contains the essential esters and microbes which are the flavours,” says Studd, who has worked in the cheese industry for more than 30 years. “When you pasteurise it, you destroy them all by killing 99 per cent of whatever’s in the milk. Without using raw milk, you break the link. When you pasteurise the milk, it’s not a genuine reflection of where cheese comes from.”

Studd feels as though insisting on pasteurisation is a quick fix for a deeper problem. Instead of superheating milk, he believes farmers who want to produce raw milk for cheesemaking should have to adhere to strict health and hygiene conditions. To his mind, it’s about ensuring animals are kept well, and milking practices are clean. “The idea that you should enforce pasteurisation as a method of keeping it safe is misplaced,” he says. “In fact you should discourage people using very dirty milk for making cheese. It might suit big producers who pool their milk from 30, 40, 50 different farms, but for the farmer who produces really good-quality milk, it makes sense he should make really good quality cheese from it.”

Understandably, the raw milk cause hit a serious complication when a Victorian child died after drinking unpasteurised “bath milk”, contracting a rare condition called haemolytic uraemic syndrome. While Studd sympathises with the concern over the health risks around drinking raw milk, he points out that milk and cheese are very different products. “Drinking raw milk and making cheese from raw milk are two completely different aspects that are often confused,” he says. “When you make cheese from raw milk, you’ve got a lot more control over the end product. You’ve got acidity, you’ve got salt, you’ve got ageing. Those controls allow you to produce a very safe cheese.”

Again, he feels that health concerns could be addressed more adequately by regulating hygiene standards rather than banning its consumption. “When it comes down to raw drinking milk – and I confess I love raw milk straight from the cow – it’s fantastic, providing the animal is healthy,” he says. “The Victorian Government’s decision to start adding anti-freeze to raw milk is a very lazy way of dealing with consumer demand. It just sends it underground.”

While a small number of cheesemakers have been experimenting with raw-milk cheeses in recent years, all of them, including Tasmania’s Bruny Island and Udder Delight in South Australia, have been cooking the curd. The recent changes in Food Standards Australia and New Zealand’s regulations mean those cheeses are no longer classified as “raw”.

And, local producers can negotiate with state authorities, putting in place a “food safety plan” that will allow them to produce raw-milk cheeses. It’s costly, time consuming and a lot of hassle. But, while he believes the new regulations are “conservative”, Studd sees a little light breaking on the horizon. “Once those plans are in place – and that could take six-to-nine months, or maybe much longer – then you’ll see more local raw-milk cheeses,” he says. “We’ve certainly got some interesting cheeses, but because we’ve not been able to make most types of raw-milk cheese, we look like we’re a very industrial producer of cheese. The irony is that Australia’s got so many opportunities, when you look at the different regions and terriors, and the fact that the dairy stock in Australia is very healthy. The potential is there to be really different to other parts of the world.”

From a cheese freak’s point of view, Studd is definitely fighting the good fight. But, he believes it’s important to keep advocating for raw-milk cheese and, ultimately, choice. “If we don’t get behind it and support it, there’s no doubt the large industrial producers will try and prevent any choice in the future,” he says. “The whole idea of individual cheese will disappear, and that’ll be a tragedy.”