In Pursuit of the Perfect Ice

Is it possible to improve ice? With his new company, Navy Strength Ice Co., The Everleigh’s Michael Madrusan is showing us there’s more to frozen water than meets the eye. Ask a bartender like me, though, and you’ll get a vastly different answer. I’d say ice is the most underappreciated element in the creation of a cocktail. Which is pretty odd considering the real estate it takes up in the average drink.

You’ve probably noticed the emergence of big rocks of ice around town. Order a whisky or a Negroni in a decent boozer and it might be poured on a single block. The trend is creeping, but as with any trend, there’s a trendsetter.

In the case of pure, hand-cut ice, it’s Michael Madrusan from The Everleigh cocktail bar in Fitzroy. It’s not just good ice he’s making, though. Madrusan is making the best ice in the country.

Launched in March, Navy Strength Ice Co. is the only Australian ice company of its type, and one of only a handful globally. Armed with an enormous American-made machine by Clinebell (“I just bought the biggest one I could fit up the stairs”), Madrusan is producing colossal, single blocks of pure ice that weigh up to 150 kilograms. Getting finished blocks out of this machine requires a hoist best suited for winching engines out of cars. Needless to say, it cost a lot to get it here – more than Madrusan is willing to divulge, anyway. After a five-stage filtration process, it takes two to three days for the ice to steadily freeze. Once it has been winched out of the machine, it takes up to 10 hours using handsaws, knives and chisels to reduce it down to perfectly cut blocks, cubes and spears. Available to buy at $1 per piece, it’s a costly ingredient for any bar owner.

If it sounds like a crazy amount of effort and money for some ice – it is. But it’s also the one factor that makes every drink that goes over the bar at The Everleigh better than anywhere else in the city.

Thanks to its mass and density, one of these large cubes will chill a drink to its lowest possible point, generally around two degrees. Just as importantly, it will melt incredibly slowly. This means a bartender has absolute control over the water ratio in your drink, and can create a perfectly balanced cocktail.

Chicago’s Charles Joly, the 2014 Diageo World Class Bartender of the Year, explains that standard ice cubes can sometimes add more water to a drink than there is actual liquor. “After a cocktail is shaken, it may have as much dilution added by this ice as the base ingredient, say, upwards of 40–50ml,” he says. “All of the sudden, it becomes a major component, and one not to be overlooked.”

And then, of course, it looks incredible. This ice is like glass – you could pull it out of your drink and read a novel through it. 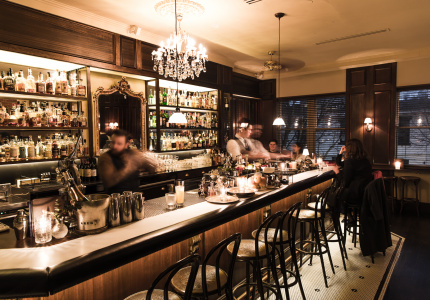