Prudence Reopens Its Beer Garden After It Was Gutted by Fire Almost three weeks ago a fire ripped through the beer garden of beloved North Melbourne bar Prudence. The fire took hold of the bins out the back, then the awnings, and the courtyard’s gabled roof was lost. The main bar was forced to close due to smoke and water damage.

“It’s a little more open plan,” says Prudence owner Peter Thompson. “I wasn’t actually as alarmed as I thought I’d be – my brain kept telling me this could be a lot worse.”

Services running to the building were lost so time was needed to reconnect water, gas and electricity. The main bar reopened on Wednesday last week and now the courtyard is open again too.

The bar’s interiors may have required just minimal repairs and painting, but the beer garden has been completely revamped. It used to have wooden walls with a retractable canopy and plenty of greenery. Now the walls are rendered in plaster and there’s no permanent awning. For now there are umbrellas for shade but eventually a permanent covering will be installed. Thankfully, one of the beer garden’s defining and idiosyncratic features, its rows of church pews, has been reinstalled, but ongoing work is still needed to get it to where is was.

Thompson’s main concern is retaining the community built around the bar. It has been a staple of North Melbourne nightlife for years; it’s known for playing vinyl and for an atmosphere that can be simultaneously rowdy and intimate. But he needn’t worry; the community rallied after the fire.

“During the fire and afterwards lots of people were dropping by, saying nice things. One of my favourite [messages] was, ‘We had our first date here’ and they were obviously married now,” says Thompson, who describes the response from the bar’s regulars as “overwhelming”.

“It’ll look different but hopefully feel the same,” says Thompson. “It’ll be nice to have everyone back in.” 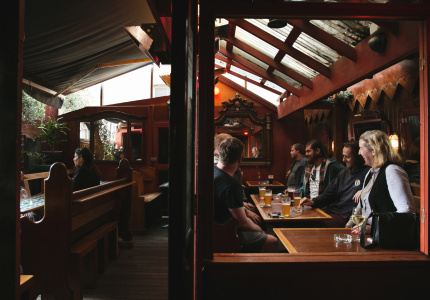