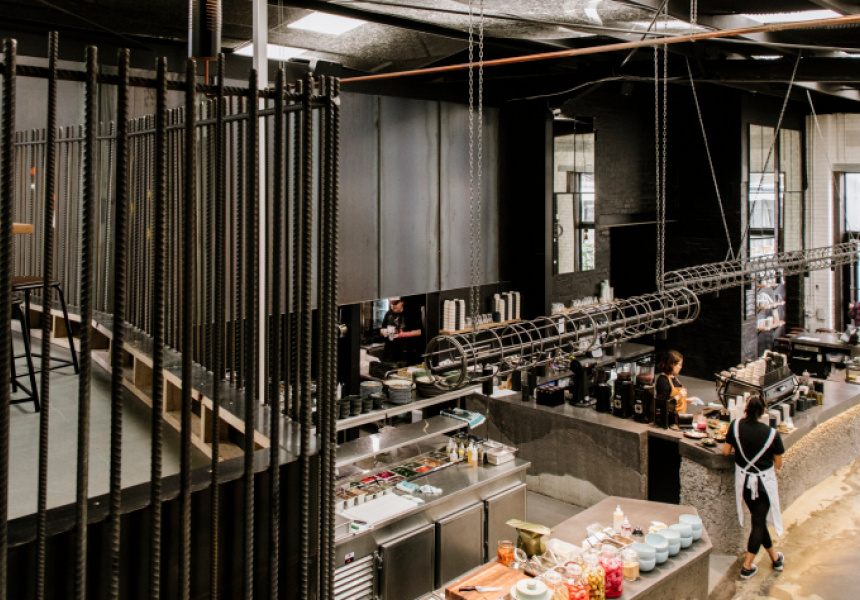 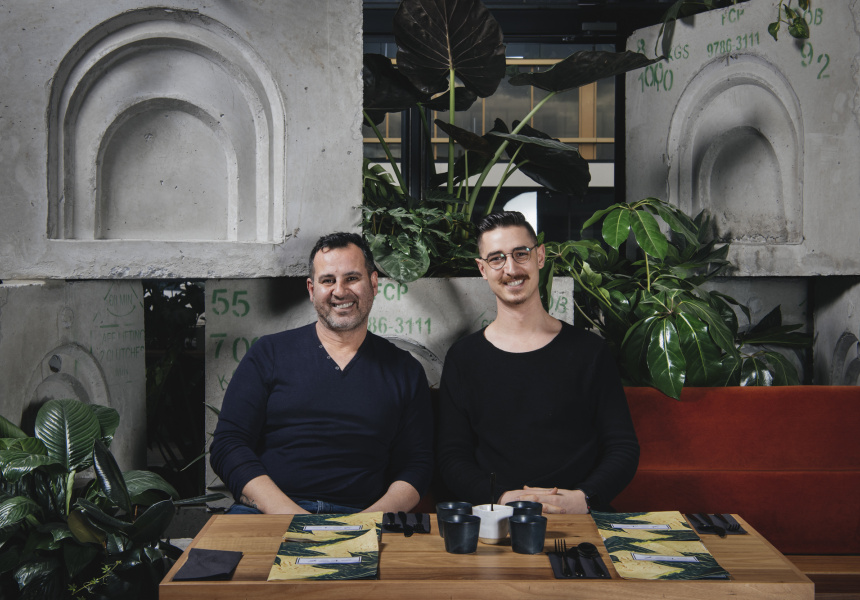 In Melbourne’s cafes the industrial-chic look is second only to Scandinavian minimalism in terms of popularity. But at Project281, Sarge Michael and Connell McGrath have taken the theme far more literally than we’ve yet seen.

Continue inside to find a sizeable coffee bar and kitchen bordered by exposed-aggregate concrete counters, and 97 seats spread between ground floor and a mezzanine. Balustrades are made from dull concrete-reinforcement rods, and the chandeliers from Victorian-era-style black steel lacework. The walls are currently bright white, but as the fit-out ages, more reo rods sunk into the brickwork will rust and dribble downwards to create dramatic streaks.

All this isn’t entirely arbitrary. For the previous 40 years the site was occupied by a printing business, which are famously grubby operations. When architecture firm Splinter Society – the same team behind Howler’s look – had its first walkthrough, it was immediately taken with the site’s decay.

That was a year ago. Michael and McGrath didn’t want to rush the opening process. Though they previously owned The Glass Den in Coburg, you get the feeling this project has a special significance. It’s the big one.

“We always knew we wanted to do a warehouse,” McGrath says. But what they didn’t anticipate was the huge step of roasting their own coffee (as Founder Coffee), or snaring Proud Mary’s and Axil Coffee’s former head roaster Anne Cooper to do it for them. “Roastress Coops” consults nationally and also roasts for 23 Degrees, a company which works with female coffee growers.

“I was travelling around looking at coffee roasters from Geelong to – to everywhere, basically,” McGrath says. “I was saying, ‘What sort of deal can you give me, give me a taste of your coffee. While I was looking at it, we were kind of like, ‘Well why aren’t we doing this ourselves?’”

Cooper’s fun zone is beneath the stairs, with a 12-kilogram Probat roaster. Project281’s baristas pull her espresso roasts through a Sanremo Cafe Racer; and filter is made to order using the Marco SP9, an incredibly consistent, single-serve percolator. Every coffee is served in a HuskeeCup, made from a mix of plastic and recycled coffee husks. They’re not as nice to hold as ceramic, but they’re better insulated and keep coffee hotter for longer if you’re the kind of person who likes to nurse your drink for 45 minutes.

Adjacent to the coffee bar, head chef Lachlan Timms and his team are plating up the usual breakfasts done-over with Japanese and Korean flavours. “We wanted to find that little market niche that was different to everyone else,” Michael says.

Timms partner is Japanese and he spent six years living there. He was also involved in the launch of Matcha Mylkbar and created its semi-famous vegan eggs. Hence dishes such as the vegan smoothie bowl with acai, almond butter, banana and Coyo; soft-shell crab okonomiyaki; a bulgogi burger; and maple-nashi custard with berries, “brandy coral” and vanilla ice-cream. There’s a simpler menu for kids, too.

Timms and co have just replanted their mezzanine herb garden for spring, and McGrath has plans to grow chamomile, peppermint, lemongrass and ginger to produce in-house teas.

This article first appeared on Broadsheet on September 6, 2018. Menu items may have changed since publication. 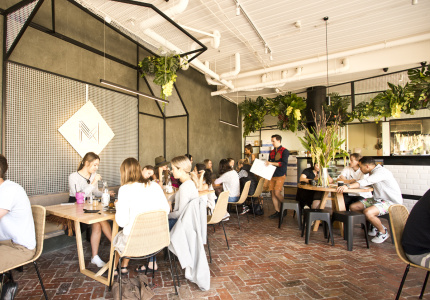