The DIY spirit is alive and well in this new north-side bar. 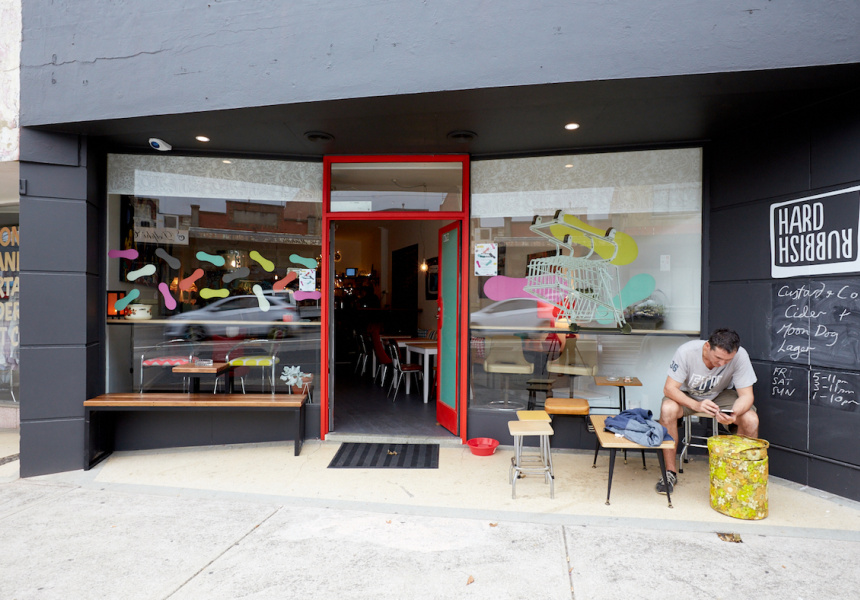 Proving you don’t need a million dollar fit-out to make a great bar, Preston’s Hard Rubbish was constructed (mostly) from treasures discovered on the side of the street.

Brother-and sister team Charlotte and James Tizzard trawled the lanes of Reservoir and the pages of Gumtree for vinyl chairs, leather couches and your nan’s old lamp. The result is a very comfy local.

The pair has steady jobs during the working week, but they’ve committed to sacrificing their weekends for the neighbourhood’s greater good. “A lot of people who live in Reservoir call themselves refugees from Northcote. We both bought houses [in Reservoir] because we couldn’t afford to live closer [to the city] anymore,” says Charlotte. “Living in the city, I had all the wonderful things around me all the time. When I moved to Reservoir, there were no bars, nothing north of Bell Street. It just wasn’t happening, so we thought, ‘Shall we open a bar?’”

The Plenty Road site has a history as a former massage parlour. “The landlords said they had to clean out all these used condoms,” says Charlotte. “It was a bit grim.”

Things have changed. There’s seven-dollar house sparkling and a line-up of craft beers: Three Ravens, Hop Hog and Hawkers, for instance. Snacks include jaffles: salty piles of cheese, coriander and chilli pesto served with a pickle and a stack of CC’s. Northern soul is on the stereo (also scavenged), or Soundgarden, if the vibe is right.

Hard Rubbish is cheap and cheerful, no doubt. Certainly treasure, not trash.