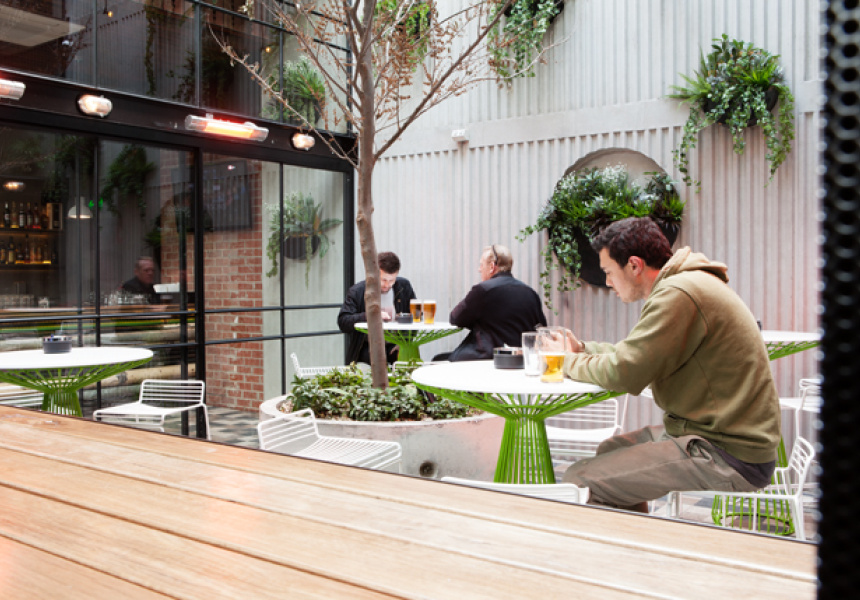 When the Sand Hill Road hospitality group embarked on plans to renovate their fifth Melbourne venue, The Prahran Hotel, they didn’t quite envisage a project that would see 17 concrete pipes, weighing between four and seven tonnes each, climb the side of the pub’s classic 1940s facade.

Stacked like beer kegs, the outlandish industrial exterior by Techne Architects draws the eye toward the interior, where circular spaces house leather booths reserved for groups of two, six and 12 people. With great consideration for the hotel’s heritage, Sand Hill Road co-owner Matt Mullins says the circular motifs were largely inspired by the venue’s original art deco design. It was imperative to tie in the modern renovations with the existing history of the public bar.

“The good news was, we had fallen in love with this wild idea,” says Mullins. “The bad news was that no one had ever done something like this before and we didn’t know how to actually do it. We had the pipes custom made and brought in on three semi-trailers and it took eleven days and nine riggers to install them. No one had attempted this anywhere on earth – we were making it up as we went along.

“We are always thinking about what’s going to happen next, but we’re not about taking a pub and detaching it from its roots,” says Mullins. “Our hope is that the pub itself doesn’t change at all. It may look different, but we are still offering the same honest and well-valued produce of a classic pub.”

The Prahran Hotel extensions also include a central courtyard shaded by a Chinese elm tree, with a five-meter bar and a series of collapsible tables that give way to a dance floor. The transformable interior fixtures help to bring the outdoors in – with large industrial windows and an abundance of greenery on display.