A Portable Melbourne Fine Diner With a Michelin-Trained Chef

Chef Romuald ‘Romu’ Oudeyer cooked at acclaimed high-end restaurants in his native France before gigs with Bistro Gitan and Mo Vida Aqui in Melbourne. Now, he’s bringing his Parisian kitchen to your home. 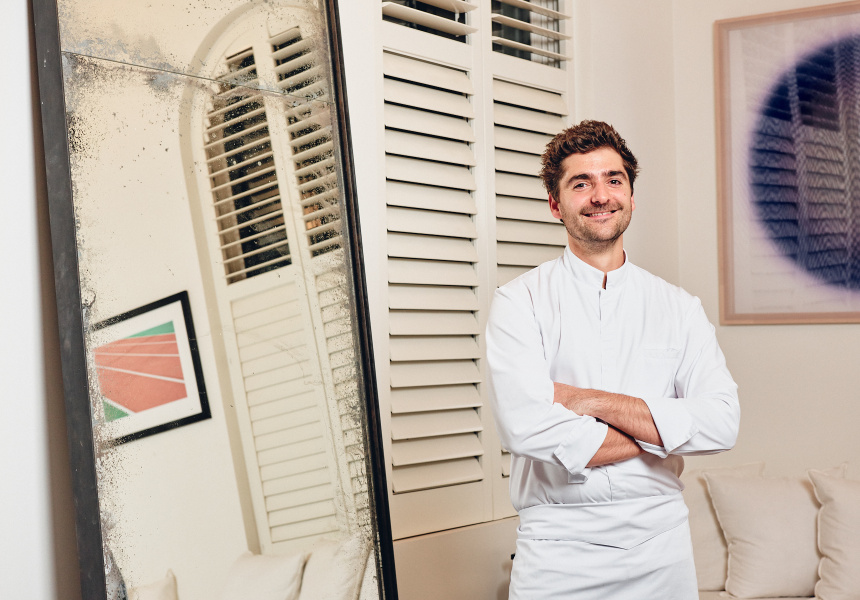 "So many people here have nice homes they like to show their friends,” says French chef Romuald ‘Romu’ Oudeyer, “I really wanted to start a catering company that was a little different and more about sharing an experience than serving a simple dinner.”

Oudeyer launched his portable dining project, Romu, in 2017. The premise is simple: Oudeyer comes to your house and cooks for as few as six friends, or as many as 30. This isn’t event-style catering – rather it’s the experience you’d have in a Parisian restaurant’s private dining room, at home.

Romu offers a three-course menu or a six-course degustation that showcases Oudeyer’s classic French training and interest in Japanese cuisine and, using seasonal ingredients from sustainability-minded producers in Victoria, South Australia and Tasmania.

Oudeyer and his crew come armed not just with ingredients, but styling know-how: native flowers; pretty, illustrated menus; bespoke crockery and cutlery. Like all things French, style is one of Romu’s best assets;

“Cooking in people’s homes is totally different to cooking in a restaurant,” Oudeyer explains. “It’s more relaxed with less pressure, and it’s more creative. It allows me more time to think about the menu and meet new suppliers around Victoria.”

Before he moved to Australia, Oudeyer worked at Michelin-starred restaurants in France including Château La Roche Le Roy, and La Truffière in Paris, where he cooked alongside acclaimed chef Jean Christophe Rizet.

After relocating to Melbourne with his Australian wife Liz, Oudeyer spent time in the kitchens at South Yarra’s Bistro Gitan and Mo Vida Aqui in the city. He and Liz began putting on Romu-style events in 2016, before formally launching the business in September 2017.

“The nice thing about these private dinners is that they’re open to everyone,” he says. “We did a dinner for a group of 24-year-olds who love food, and then people with children who also love the ease of having a fine-dining restaurant come to them, rather than go out.”

Romu’s current menu features smoked Tasmanian Wagyu beef with fresh fig, pistachio, parsley oil and horseradish, and South Australian marron with apricot, pumpkin puree, fresh almonds and sansho pepper. But he can also customise menus to be vegetarian, or focused on a particular ingredient, such as snapper.

"One group asked for a full Japanese degustation,” he says. His answer: “sure”.

“Usually people want us to curate the wine around the food offering, but we’ve also had people come to us with a really nice bottle from their cellar, so we’ll match a menu to their wine, too,” Oudeyer says.

Romu can set up at any home (or event space) in Victoria– in fact, regional dinners are welcomed.

“Working in different kitchens presents interesting challenges,” says Oudeyer. “But what I really love about these home dinners is being on the move and meeting new people. It’s actually pretty hard to find really good suppliers as they tend not to advertise, so connecting with them while on the road is great.”

Romu is taking bookings for 2018. A three-course menu begins at $140 per head. Romu is also available for larger events requiring canape-style dining.