Pidapipo and the Hive Next Door

A new collaboration between a gelataria and a local beekeeper focuses on Melbourne’s bees and the flowers they feed on. And you can win a free month of gelato in celebration of it. 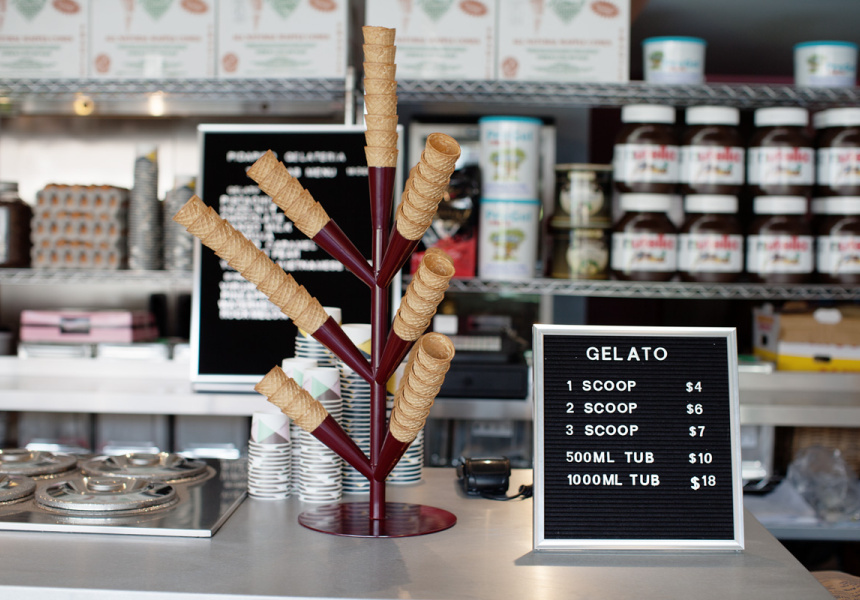 When Lisa Valmorbida first opened her gelateria, Pidapipo, on Faraday Street in Carlton, she came to a bartering agreement with a local beekeeper – she gave him her homemade ricotta, he gave her honey. Later the beekeeper introduced Valmorbida to Nic Dowse, another Carlton local who keeps beehives on his roof.

Pidapipo’s rooftop has been home to some of Dowse’s beehives ever since. So Pollination, a new, limited-edition collaboration between Pidapipo and Dowse’s beekeeping collective Honey Fingers is the result of a long friendship.

The range is inspired by honey and flowers and Valmorbida has developed three flavours for it: rose and honey nougat; elderflower and lychee (sorbetto); and ricotta; honey, lemon and lavender, which will all be available at Pidapipo until March 30.

“Lisa was asking me, ‘What do bees eat?’” Dowse says. The pair hit on the importance of botanicals in food, and honey specifically. “We hope it’s like a little handful of that idea in a cup, in your hand. It’s made here in the city, it’s grown in the city, where the animals live.”

Each cup is topped with organic, edible flowers and honeycomb from the Honey Fingers hives on Pidapipo’s roof. You also get your own seedling to plant at home, thus helping to feed the bees in your street.

A bee’s diet dictates the flavour profile of the honey it produces, and the characteristics of each local hive and where it's located determine that profile.

“We call [our honey] ‘poli-floral’, so it’s not a mono-floral honey like a red gum or a grey box honey,” Dowse explains. “You still get really big variations in colour, in texture, in flavour between different suburbs and also between different seasons in the same suburbs.

“In North Melbourne in summer, when all of the big red gums and the sugar gums in Royal Park are flowering, the honey is a really dark brown – almost reddish … and it’s really strong and aromatic. Fifty metres across the road I have an established quarter-acre garden with lots of lavender, and the honey’s completely different … It’s light, it’s golden, it has a surprisingly strong finish on it.”

Dowse has been beekeeping since 2011 and began Honey Fingers at the end of 2013.

“It started as a beekeeping thing, but we’re really interested in the intersection between beekeeping, art, science and ecology,” he says.

As a small-batch producer, Dowse’s process differs from that used at commercial apiaries. His honey isn’t blended or heat-treated, and he uses just three small extractors. Each batch is processed separately and numbered, making each one unique.

Honey Fingers runs exhibitions, workshops and other projects in an effort to “break down the idea that the city is for people and nature is for animals out in the trees somewhere”.

“It sounds counter intuitive but, for bees, urban beekeeping is so much better than keeping bees out in the bush,” Dowse says. Urban areas provide more consistent access to food and water. And there are fewer environmental pressures, such as drought, bushfire and agri-chemicals.

Buying any one of the Pollination flavours during March will help 3000 Acres, a Melbourne-based not-for-profit that transforms vacant lots, laneways and disused spaces into community gardens.

Purchase the gelato, post a photo of it on Instagram with the hashtag #pidapipo, and Pidapipo will donate 100 seedlings to 3000 Acres to plant at the Jewell Station community garden in Brunswick.

“Everyone who’s commuting through Jewell station every day gets to see the flowers that have been born from this campaign,” Dowse says.

Dowse is hosting two special workshops on Wednesday March 1 at 6pm and 7.30pm at Pidapipo's Windsor Laboratory, providing an introduction to urban beekeeping and a live demonstration of honey extraction. Tickets are $25 and there are only 10 spots available in each session. You can book here.

The competition runs from today until Monday March 6. All you need to do is sign up to our newsletter in the entry form below. The winner will be drawn on March 7.

Broadsheet would like to thank everyone who entered and congratulate our winner, Claire U.