Named after a childhood game Lisa Valmorbida’s nonno created to entertain the grandkids, Pidapipó gelateria is a project of passion, heritage and awesome gelato. 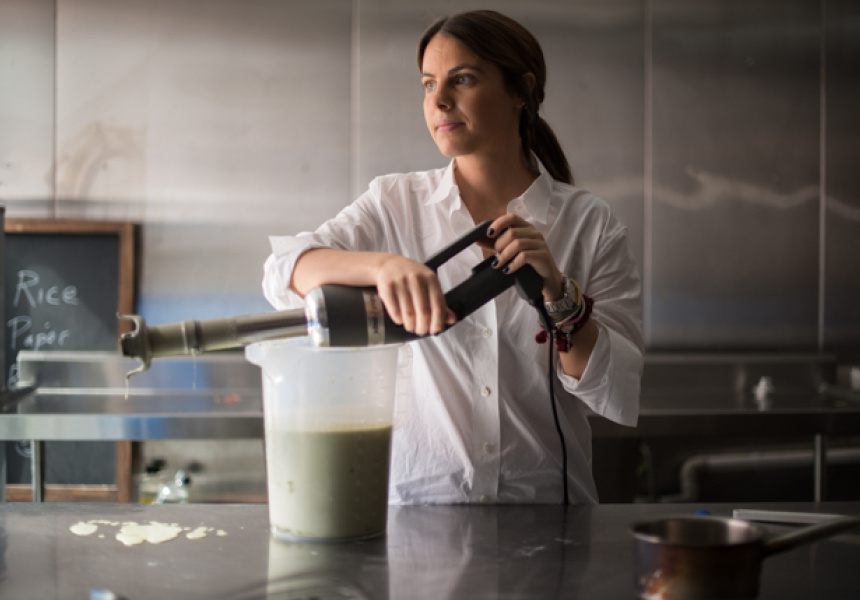 25-year-old Lisa Valmorbida hadn’t planned on becoming a professional gelato maker, in fact she hadn’t considered a career in cooking at all, but after dropping out of her interior design studies (much of which was spent watching cooking shows) she decided it was time to turn a hobby into a reality.

“My family is Italian and Lebanese so I was brought up with amazing food. I just never thought I’d end up cooking professionally,” Valmorbida says.

After training at Sydney’s Le Cordon Bleu, Valmorbida returned to Melbourne, getting qualified at Donovan’s Restaurant in St Kilda, where she started tinkering with their gelato machine.

“I know good gelato,” Valmorbida says. “I’ve spent a lot of time in Italy eating gelato. Melbourne seems to have a similar affinity with gelato and so I saw it as a great opportunity to do something of my own and specialise in something.”

With this in mind, Valmorbida headed to Italy to learn from the best, completing a four-week intensive gelato course at the Carpigiano Gelato University, mastering the science and maths behind creating the perfect recipe.

“I was thinking that it would be fun, almost like a bit of a holiday, but when I got there it was actually really complicated,” Valmorbida laughs. “It wasn’t just chucking ingredients into cream. The maths in balancing the recipes and getting everything perfect was not at all what I’d expected.”

Upon completion, Valmorbida spent some time working in a gelateria in Vicenza, Italy, a small town where her family comes from, researching and honing her skills before returning to Melbourne with not only a wealth of knowledge but some go-to ingredients she’s importing from Italy (pistachios from Bronte and hazelnuts from Piedmont) to use at her Carlton gelateria pop-up, Pidapipó.

Due to open in a fortnight, Valmorbida has spent the last few months sourcing the best local ingredients, including fresh fruit (never frozen)to be used in the 12 flavours that will contain no artificial flavours, additives or colours (so don’t expect your mint to be green or your banana to be yellow).

“I want to give everyone an authentic Italian experience with traditional Italian flavours that showcase the quality ingredients I’m using”, she says.

Flavours will include traditional flavours like straccietella, fior di latte and Valmorbida’s personal favourite, gianduja, with Piedmont hazelnuts and chocolate; while more experimental flavours such as sweet corn, popcorn, pina colada and ouzo with Vietnamese mint keep it modern.

“In Italy there’s a gelateria on every corner. It’s a way of life and not at all uncommon for someone to have an iced gelato daily,” Valmorbida says, adding, “It’s a really good way of life. Maybe soon in Melbourne instead of saying ‘Let’s go for a coffee’ we’ll say ‘let’s go for a gelato’ instead. The more gelaterias there are on offer the more likely it’ll become a way of life here too.”

Wanting to create something fun with a lot of personality Valmorbida joined forces with Sydney interior designer Tamsin Johnson and commissioned local artist, Esther Stewart, to paint the walls in bright, happy colours that resonate the feel of Mediterranean houses. Fabio Ongarato are also involved creating a true Italian experience through design and branding.

Through the front window watch Valmorbida create the gelato that remains hidden under pozettis (just as is done in Italy and Spring St. Grocer) to keep it at its optimum before being scooped into a cup or cone and covered with your choice of whipped cream, chocolate sauce, and Nutella. Gelato carts are also in the works, to be introduced from January for restaurants and events.

"It's hard to describe," Valmorbida says of the game her nonno created and after which the business is named. "He would say Pidapipó points up or Pidapipó points down, and get us to either point up or down. He would try to catch us out by saying up whilst pointing down, or vice versa. I just thought that it was a beautiful way to remember him and incorporate that happiness into my gelateria."