Which new restaurant will open in Elwood? The choice is yours. The team behind Hanoi Hannah, Saigon Sally and Tokyo Tina is venturing beyond Windsor for the first time with a new venue in Elwood.

After much speculation over what the new restaurant will be (“Beijing Bonnie” and “Bangkok Betty” were a couple of reader guesses on our Facebook page), we now know the answer: whatever we want.

As of tonight, you get to vote for which of the three existing restaurants will get a new twin. “We want the people of Elwood to decide,” says co-owner Nic Coulter.

The group’s three other restaurants are all in Windsor, where they’ve had solid success. Why head further south? “It’s our first time outside the golden triangle,” Coulter acknowledges, laughing. “But Elwood is becoming more of a hub. Places are popping up, like Dandelion and The Dining Haul. The scene has changed a lot. Maybe people want something closer to home, rather than having to venture into the city for a nice dining experience.”

The restaurants’ owners want to engage directly with Melbourne’s rapidly changing dining culture, and Coulter is enthusiastic about opening the decision up to the public. “It makes people feel they have a say in how the dining scene is going, how they want it to progress.”

Voting for the new restaurant is open on all three of the team’s restaurant websites until 6pm Tuesday August 4. The future of 24 Ormond Road, Elwood will be announced next week, with the restaurant opening around Christmas or early in 2016. 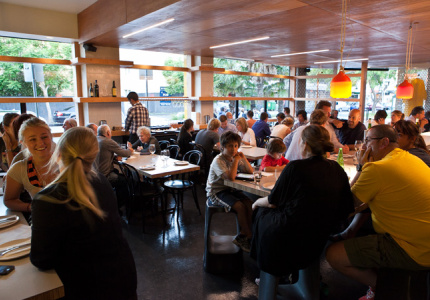