Pho Thin, a 40-Year-Old Eatery That’s One of Hanoi’s Best, Opens in Melbourne

Founder Nguyen Trong Thin spent a month visiting Melbourne’s produce markets to develop a pho recipe – with a secret ingredient – that stands up to his rich and aromatic original in Vietnam. 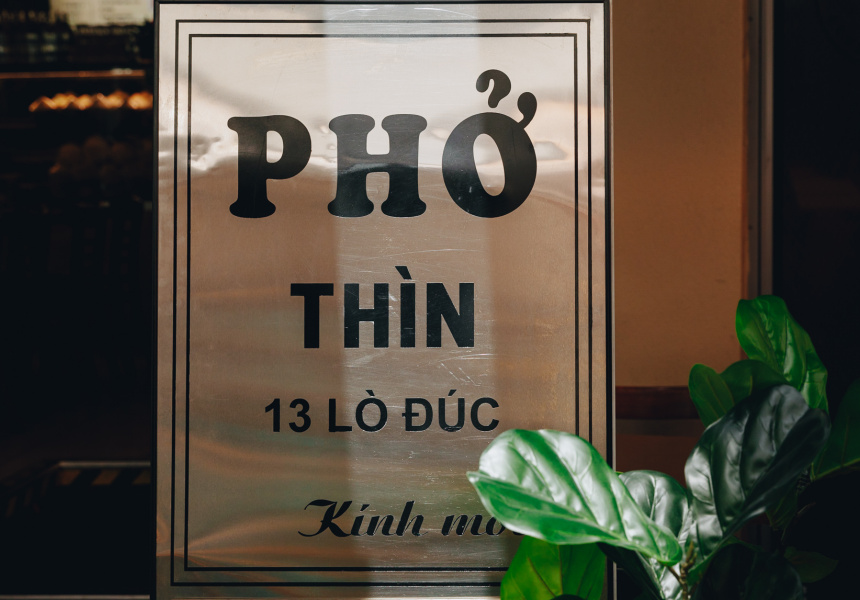 Pho Thin does it differently. Forty years ago, founder Nguyen Trong Thin began stir-frying his beef in garlic before adding it to the broth, and that’s a large part of the reason his tiny Hanoi eatery, which has served the same recipe since 1979, is consistently packed.

Now the first Pho Thin branch outside of Asia (and only the second outside Vietnam) has opened in Melbourne’s CBD. It’s owned by husband and wife team Nguyen Lam and Duyen Le Ky, who travelled all over their native country in search of the best pho before convincing the founder to let them export his concept.

But this isn’t the pho they grew up eating. Nguyen Lam (who isn’t related to Nguyen Trong Thin) and Duyen are from southern Vietnam, which has a very different approach to pho compared with the north. The southern style uses Vietnamese basil, bean sprouts and hoisin sauce for a stronger flavour, while the northern version is simpler on the surface, but no less flavourful.

“I couldn’t eat it at first. It didn’t taste like the pho that I knew,” Nguyen says. “But my husband and I would always try it whenever we were in Hanoi, and the second or third time, I realised that it was really good.”

The recipe here is slightly different to the Hanoi broth, as Duyen wanted to forego MSG. The elder Nguyen travelled to Melbourne and spent a month in the city visiting local markets, choosing produce and developing a recipe that’s as close to his original as possible.

“Mr Thin told me that if I wanted to make it [without MSG] it would cost more – more vegetables, more beef bones, more time to make the soup taste like it should,” Duyen says.

The broth is started the day before, with beef bones boiled in water and an ingredient imported from Vietnam (Duyen won’t tell me what it is). Later on, vegetables are added, and finally aromatics such as ginger and shallots. It’s all cooked overnight for at least 12 hours.

Pho Thin’s signature is the “stir-fried up” rare beef – skirt steak fried in oil with lots of garlic, added hot to a steaming bowl of broth. There’s also beef brisket, poached chicken and a red-wine pho, where beef is marinated in a red-wine sauce overnight, boiled for an hour until soft, then added to a bowl of broth.

Each bowl comes with flat rice noodles, a big serve of chopped spring onion and coriander, and you can also add a raw egg yolk and a Chinese doughnut – long, thin and crunchy – meant to be dipped in the soup.

“The doughnuts are made from Mr Thin’s own recipe,” Duyen says. “They are very difficult to make because it depends on the weather – too hot or too cold, it can change the doughnut.”

To drink there’s fresh coconut juice, strong Vietnamese iced coffee (black or with condensed milk) and Vietnamese beer (333 and Hanoi Beer). One red wine and one white round out the drinks list.

The small shop is off Lonsdale Street on Hardware Lane in the city, a red-brick laneway crowded with eateries and outdoor seating. Inside, the blue-tiled and timber-panelled walls, light floors and floor-to-ceiling mirror are leftovers from the spot’s previous life as a takeaway sushi joint.

Duyen has made small changes so it feels more like home: the lights all have different woven rattan shades, handmade by artisans in the Vietnamese countryside, and a similar material can be found draped along the front counter. Picture frames on the wall show newspaper clippings about the original Pho Thin and a photo of its founder.

“It’s crowded like in Hanoi, [where] people are everywhere and tables spill out onto the streets,” Duyen says. “When [Vietnamese] people come here, they eat our pho and can feel like they’re back home. Some customers have told me they felt homesick because it reminded them of Hanoi.”

This article was updated on March 5 to state that the raw egg yolk and Chinese doughnut are optional extras. They are not included with every pho.