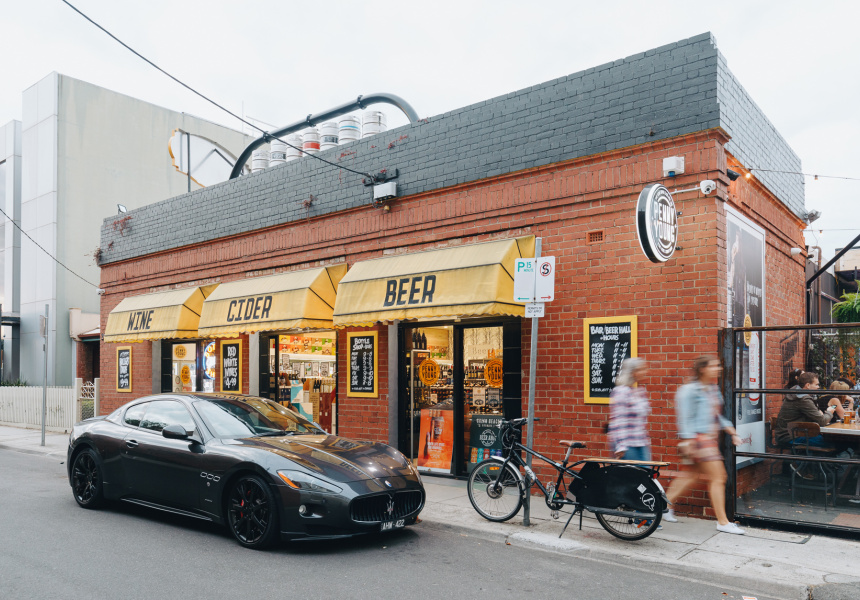 Penny Young has helped Moonee Ponds residents get their hands on an extensive range of beer and wine since its launch in 2015. While the shop has over 350 beers and a large wine offering, there’s now another reason to seek it out.

A mixture of high-and-low wood tables and old beer barrels are dotted about. The bar top and other bits of furniture are made from wood that Penny Young owner Anthony Bongiovanni recovered from one of Melbourne’s oldest houses, Wentworth House, which he purchased a few years ago.

He milled and polished old gum and cypress pine from the property for the bar.

There’s 17 beers and one cider on tap. You’ll find a mixture of local craft from the likes of CoConspirators, La Sirene, and Fury and Sons. A few mainstream beers and internationals, such as Birra Moretti, round out the list.

Former Carlton Yacht Club manager Jacob Goss designed the cocktail menu, with variations on classics, as well larger cocktails for sharing. His Joan Collins adds a refreshing peach liqueur to a classic Tom Collins, and the Not-So-Old Fashioned uses raspberry syrup and Chambord (a French raspberry liqueur) in place of sugar. The sharing cocktails are for four or six people, and while most lean towards the sweet end of the scale, they’re still thoughtful. The Bootlegger, with bourbon, black tea, agave syrup, bitters, orange and mint, is surprisingly refreshing for a bourbon-based drink.

There are a dozen or so wines by the glass – mostly local – and a few bottle options, and you can purchase any bottle over $25 from the expansive selection in the shop next door. Corkage is charged on top.

The menu features eight pizza rossa and eight pizza bianca, cooked with sparse toppings and lots of fior di latte in what Bongiovanni calls “the Rolls-Royce of pizza ovens” – a Marra Forni imported from Italy.

With a relaxed atmosphere, plenty of drink options and woodfire pizza, the Beer Hall employs a well-worn formula. But it’s one that works.