A house of prosperity and poached eggs arrives on Whitehorse Road. 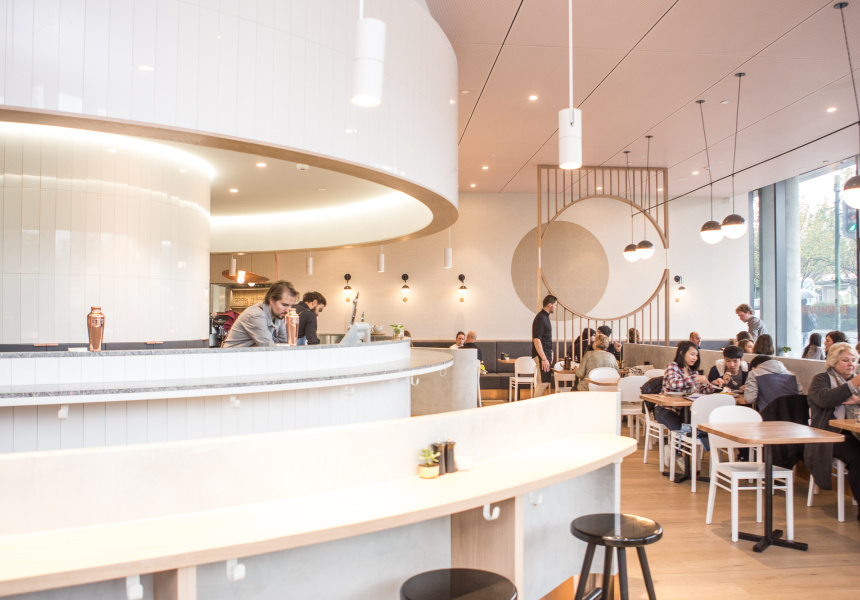 Box Hill’s got a food hall and a Jamaica Blue, but Stephen Liu doesn’t think that cuts it. So, together with his business partner, Mary Lai, the property developer-turned-restaurateur opened The Penny Drop, a slick all-day diner. “We wanted to make something slightly more trendy in Box Hill,” say Liu. “I think there’s a gap to fill, that’s why we’re here.”

Bringing in graphic-design studio Pop & Pac, which put its mark on The Kettle Black and the soon-to-open Higher Ground, along with interior-design firm We Are Huntly, The Penny Drop has used a circular theme central to Chinese symbology, with round marble bars and circular copper-coloured lighting.

“It’s Box Hill, so everything’s Asian, and there’s this old concept in Chinese tradition that means everything goes round in circles. Roundness means prosperity,” explains Liu. “We’re under the ground floor of the Tax Office, so it’s also round like a coin. So we applied the concept throughout the whole fit-out.”

The enormous menu, designed by chefs Jason Shiong and Daniel McDonald, likewise fuses East and West. A potato and garlic-chive waffle comes with poached eggs, ham, hollandaise, and wakame, while a sweet-and-sour pork knuckle is covered in fried shallots and a master-stock glaze. A mandarin brûlée with lychee and ginger biscuit is Liu’s favourite. “It doesn’t taste too sweet,” he says.

Coffee is by DC. There’s also beer on tap, a wine list, and a cocktail menu that includes a range of sours.