Pass It Down is a family album in the form of a cookbook, the venture of sisters Laura Jean and Beth Ellen. Created primarily for their family, the 112 page cookbook bursts with cherished anecdotes and love for baking. Broadsheet had a chat with co-author Beth Ellen about their self publishing venture. 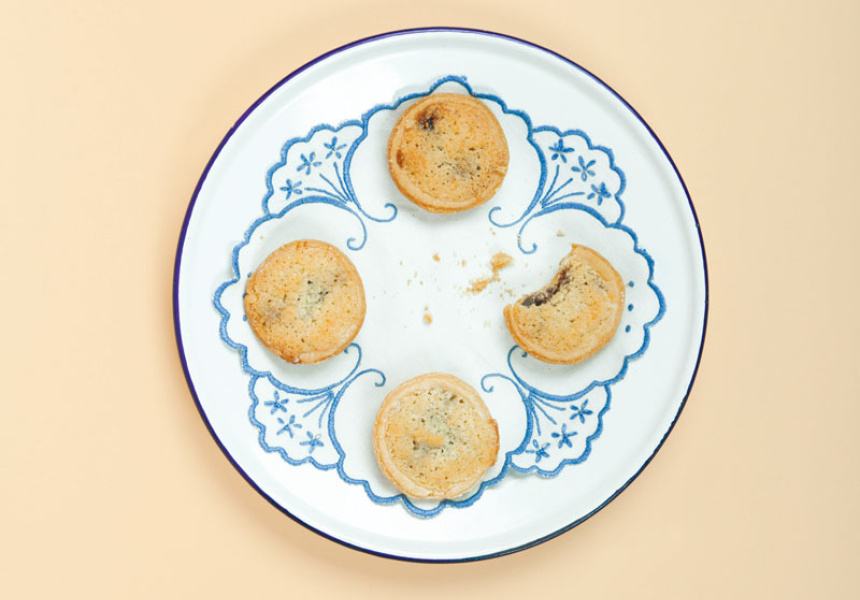 If you’ve ever baked (and we sincerely hope you've done it at least once in your life), you’ll know that it’s always better with family or friends, giving you sneaky tips along the way.

Sisters Laura Jean and Beth Ellen come from an enormous family, and with every event came a signature dish from each family member. The two grew up in their nanna’s kitchen, a place that may as well have been a baking wonderland; unearthing the secrets behind what makes a cake extra delicious. As with any baking wonderland, there were always fresh cakes ready to be devoured with a hot cup of tea.

Laura and Beth realised that these recipes, no matter how great they were, were at risk of being lost in their nanna’s kitchen. So they created a cookbook. Everything in the 112 page Pass It Down represents the kinsfolk. From the photos taken by the sisters, to the stunning detail of borrowed crockery and doilies from family, Laura and Beth have put together the cookbook with sincerely stunning detail. Holding Pass It Down might as well transport you to their hospitable, always-something-baking kitchen.

Tim Fisher: When did the idea first form to publish a book? Was it an idea you’d been carrying around for a long time?

Beth Ellen: It was about four years ago that I first had the idea. I was visiting my great aunt in the country and she was icing some of her famous ‘kisses’. My sister and I always loved chatting to her about her baking and whenever she would give us one of her recipes she used to fossick through all of these gorgeous little notebooks with hand-written recipes. I guess it made us wonder might happen to them all once she was no longer able to make them. At that same time my nanna was in a nursing home and she wasn’t well enough to bake anymore, we thought it might be a pretty special thing if we could collate them all.

TF: Had you published anything before?

BE: I’ve worked in publishing a little bit before, but never on anything like this.

TF: Obviously the first step was to collect the recipes, but what was the second step?

BE: Talking to everyone. It was a really special part of the project, sitting down with the family and hearing all of the stories and tips. My Auntie Bett sat down for hours with us and talked about the family growing up… Which dishes she learnt from her mum and to which events she used to take them, who won what award at which show and so on. It was pretty magical actually – I’m a real softy when it comes to old family stories like that.

TF: Did you test all the recipes? How many times?

BE: We did. Some more than others. Especially when they were a flop the first time. My mum tried to make my nanna’s Ginger Fluff, but every time she tried, it kept sinking in the middle. It became a bit of a running joke and we started calling it the ‘ginger flop’. We all think my nanna was secretly happy that my mum couldn’t make it the way she used to.

TF: Did you do all the pre-press work yourself - design, layout, writing etc? Were there friends you called on?

BE: I did a fair chunk of it alongside some help and support from friends and family. My sister helped collate the recipes and stories and my mum helped out a fair bit in the kitchen and was my go-to for checking baking terms and that sort of thing. My background is in design and I have a real love for this sort of thing, so it kind of just became my baby. I did a lot of the editing work, bought a starter lighting kit to take the photos and just went with it. I have to admit, it was a pretty scary process and it was a lot of work, far more than I ever imagined but I’ve learnt a lot and I think it was worth it in the end. I am pretty indebted to my partner though, he was a bit of a rock through the whole process, ironing doilies, icing cakes, holding the paper up while I took photos. He was amazing and I couldn't have done it without him. I also have a couple of friends who are designers who I would send screenshots to and they would give me feedback. And a couple of other friends did some proof reading for me too.

TF: Did you approach a publisher or was it always the plan to self publish?

BE: To be honest, it was originally meant to be just for the family. When I started doing it the intention was to only ever print 100 copies and distribute them throughout the extended family. With my nanna having 13 siblings, there are plenty of relations. It was only when I started enquiring with printers that I realised how expensive it was going to be to get such a limited amount done. It wasn’t really going to be financially viable. So essentially the solution was to print more to reduce the unit price and hopefully sell them to cover costs. At that stage it did cross my mind to approach a publisher, but my family were all waiting for it and I didn’t know how long a process like that could take or what would be involved.

TF: Are all proceeds going to Nathalia Op Shop? Why did you decide to do that?

BE: Growing up, my family has always been really generous. They didn't have much, but were always really generous with what they did have. I found this really inspiring. The small town where they’re from is quite modest. Many of my relations work at their small local op shop, where funds raised go to support the local community – help kids get to school camp, help when there were the floods, that sort of thing. My main aim is to just break even, so I thought if a profit is made that seems the most fitting spot for it to go.

TF: What’s your fondest memory from putting the book together?

BE: I had a little launch in the country, at their local hall and everyone who had a dish in the book brought it along and relatives and friends and locals popped in to see the book and have some afternoon tea. The whole day was gorgeous, but without a doubt my favourite part was seeing people buy the book and take it up to each of my family members and ask them to sign their recipe. Watching your 90 year old great aunt do book signings is something you’ll never forget.

TF: Did you learn anything new about your family from putting it together? What?

BE: I learnt that when my great grandparents passed away very young and my great aunt raised the family, her 13 siblings, by the time they would invite friends or partners over for dinner, she would sometimes be cooking for up to 20 people. And this was just an ordinary dinner.

TF: How did you choose the stories you included with the recipes?

BE: We just tried to include the stories that we heard along the way of making the book – anything quaint that makes you think not only about the recipe but the story behind the recipe – who’s baking, what for, where are they going. They were there to add droplets of reminders that with everything we eat there is a story – many.

TF: What has the reaction been like from your relatives, who’s work (and to some extent, life) has been immortalised in print?

BE: They all love it. The two main people who inspired the book essentially were my Great Auntie Bett and my nanna, Nellie Stanger. My nanna passed away a couple of years ago so unfortunately she didn’t get to see it. But I can imagine exactly what her expression would have been like if she had. I think it’s the talk of the town though. They’re selling at the local post office and newsagent and everyone in the town knows about it. And that makes me happy. It makes me happy that so many people get to hear the story of my family and how amazing they are in the kitchen.

TF: Do you have plans for another publication, or are you just happy Pass It Down has told the story you wanted to tell?

BE: For now, I need a rest. But I love publishing. I don’t think I will be doing anything similar to this again, but I would like to make more books in the future. Books are a culmination of image, word, stories and ideas in printed form – for me it’s the perfect combination.

For information on where to purchase Pass it Down or to buy it online, visit passitdown.com.au or see Beth's personal website.