The 154-year-old neighbourhood pub has been overhauled by the team behind The Royston. 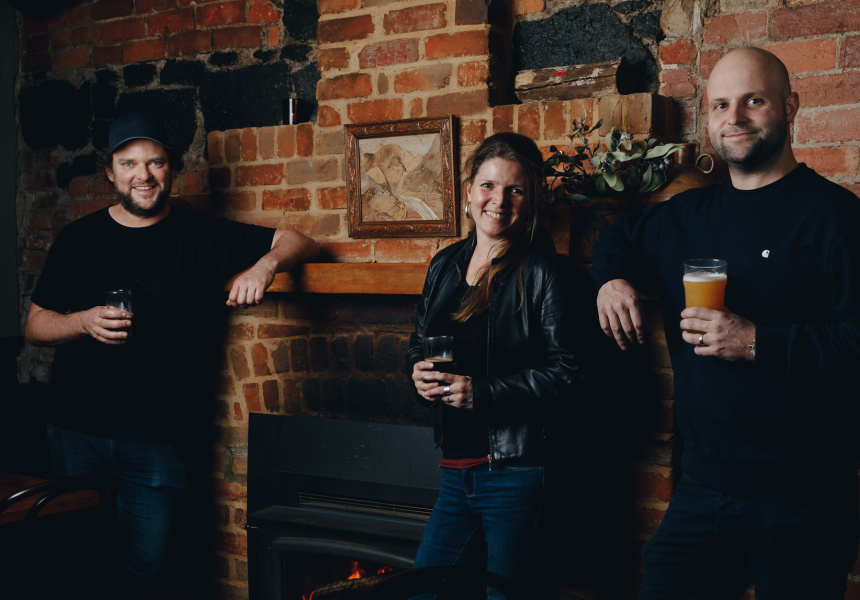 It was a fact-finding pub crawl that led new Park Hotel co-owners Ed Harley and Nick Sawle to Abbotsford. The pair, which co-owns Richmond’s Royston Hotel, was looking at a venue nearby when The Park Hotel caught their eye.

“We just fell in love with The Park,” says Harley. “We really liked the feel, especially the front bar.”

Working closely with Collingwood interior design firm Bergman & Co, Harley and Sawle overhauled the inside of the century-and-a-half-old pub.

“Nothing structural, though, just look and feel,” Harley says. “The brief we gave Wendy [Bergman] was: ‘We think the place has good bones. Less is more’.”

The front bar’s original wood panelling has been retained, as have the polished timber floors and patterned carpets, which the overall colour scheme was inspired by. The rest of the space has been given a lift with a fresh coat of paint, new tiling, pops of greenery, tan leather bar stools and Australian landscape artwork on the walls.

Harley and Sawle, conscious of the history they have been handed, have had to balance their enthusiasm for the renovation with respect for the historic building.

“The pub is 154 years old,” says Harley. “We’re just the custodians of the next phase.”

Outside there’s now an 80-capacity beer garden with banquette seating and an outdoor pool table. An exterior bar is planned, too, for easy access to beer taps on lazy summer afternoons.

The Park’s revival coincides with other locals The Retreat and The Carringbush also finding new owners.

Sawle, formerly of Archie’s All Day and Donovans, will be overseeing the kitchen.

“It’s mostly classic pub meals, but everything done from scratch. All the sauces are made in-house. We don’t take any shortcuts,” he says. “That’s part of the value of a really good local pub.”

Influences are varied. Alongside steaks, parmas and burgers, there’s “biryancini” (lamb biryani, arancini-style), “hot and numbing” chicken wings, and cheeseburger spring rolls. The vibe is laid-back and everything is ordered at the bar.

Sawle says the new menu is a major shift from The Park Hotel of old.

“The kitchen was a bomb. [The pub] had a strong local following in terms of drinkers, but food was definitely not the focus,” he says. “We’re not trying to be a high-end restaurant, though. Most of what we sell is parmas and steaks – but we want them to be the best you can get. And we try to have a bit of fun with the rest of the menu.”

The Park Hotel is determined to support great brewers, but this doesn’t mean a craft-only tap list. Twelve taps offer a range of classic lagers, pale ales and more modern craft styles, such as Feral Brewing Co.’s Biggie Juice NEIPA, a New England IPA with apricot and peach aromatics. Wine is from a “small, savvy list” designed to appeal to a broad demographic, an ethos the pair hopes comes across throughout the pub.

“It’s the sort of pub you want to be your local,” says Sawle.

This article first appeared on Broadsheet on July 19, 2018. Menu items may have changed since publication.