Pizza is back on the menu for chef Ben Sisley and baker Alex Rogers at their new pizzeria Ovest, Italian for west. Proud west-siders and hospitality guns, Alex Rogers and Ben Sisley have put 20 years of friendship on the line to bring a splash of European flair to West Footscray. They have opened new family friendly pizza restaurant, Ovest.

Architects Mike and Louisa Macleod, and design studio Ortolan, have given the space an industrial feel. It is done in clean whites, bold blacks and with a burst of colour.

Walk in and grab a snack at the front bar while admiring the hand-painted, geometric feature wall, or pull up a bentwood chair at one of the round tables and enjoy something substantial amidst a grand display of canned tomatoes, bags of flour and olive oil.

The menu, described by Sisley as “robust like the west”, is still evolving. The pair has installed a Spanish, stone-deck electric oven – the same one used at Rogers’ Sourdough Kitchen bakery. Expect a selection of traditional pizzas and some bianco bases, as well as main dishes such as a rare tuna nicoise and a pork-and-veal lasagne. It is all best paired with a glass of Italian or Australian wine, none more than $10.

With a long list of accomplished eateries to their names, Sisley describes Ovest as an, “Accumulation of all the venues Alex and I have worked in over the years.” Rogers brings his previous culinary expertise from Victoria’s Warrenmang Vineyard, while Sisley is known for his former head-chef role at St Kilda’s Mr Wolf. His most recent stints also include food styling for celebrity chefs Heston Blumenthal and Curtis Stone. Despite their established skill set, they’re adamant it’s not about showing off, but simply bringing people together for a drink after work or a family occasion. 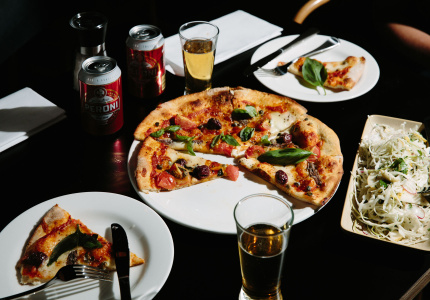