You’ve probably passed it countless times on your way through Southern Cross Station, but The Savoy Hotel has been closed for 15 years. We take a tour of the iconic Melbourne building with Samuel Daish – one of two responsible for its overhaul – less than a month before it reopens. 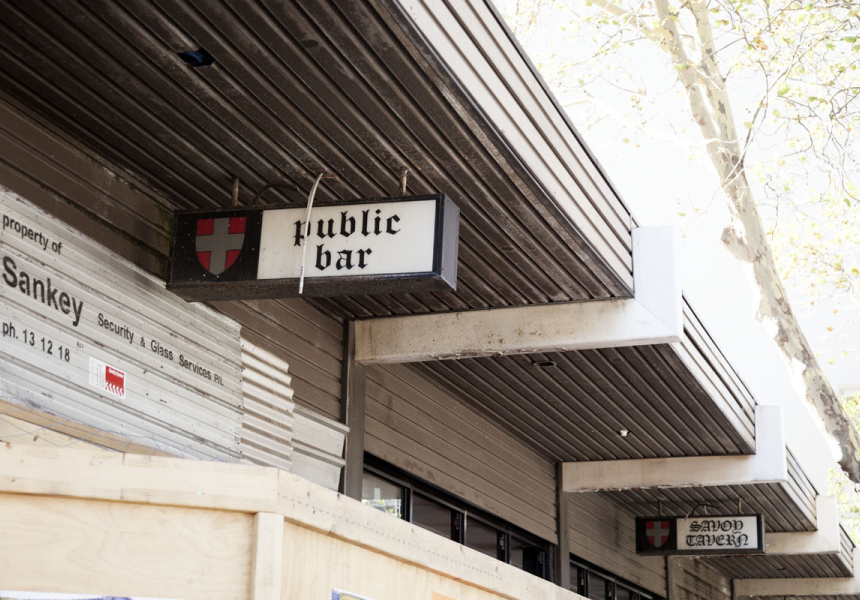 It is estimated that in 1973, The Savoy Tavern – a one-storey pub on the corner of Bourke and Spencer Streets – sold more beer than any other pub in Melbourne. It was a rather rough west-Melbourne watering hole, a gateway back into the real world for those who’d been granted leave from the remand centre just a few hundred metres further up Spencer Street. It was never an architectural marvel from the outside. There were just a few small windows and a bottle shop on the corner of Spencer Street that sold cheap beer and low-end spirits. Inside, it was like something out of a David Williamson film (The Year of Living Dangerously, Balibo); beer-soaked red carpet and cigarette smoke, televisions, pool tables and long island ashtrays that spanned the entire length of the bar at your feet. Built by Carlton United Brewery, it was first a pub, and then it was a bikie hangout and strip club.

The Savoy was always a little rough around the edges, and was never known for its food or architectural splendour. It was a simple pub with a simple offering, or as the venue’s current custodian Sam Daish explains, The Savoy Tavern was loved most because it was the setting for some of Melbourne’s most colourful and iconic stories.

For the past 20 years The Savoy has been a derelict and deserted building covered in paste-ups – a magnet for graffiti and squatters who have, to Daish and Rowsthorn’s great surprise, left most of the building’s major components intact. Even the handcrafted timber nosing on the bar surface has been restored to its former glory.

Mark Rowsthorn, the property owner, bought the site in 1999 from the government of Nauru. Now, an enormous (estimate one million dollar) refurbishment is underway to reinvent The Savoy Hotel.

“It’s been a land bank ever since it was bought in 1999,” Daish says, explaining that after years of being a topic of conversation on talk-back radio, Mayor Robert Doyle was pleased to assist Daish and Rowsthorn in drafting plans for a new fit-out and refurbishment of the Melbourne establishment, one with a very simple and universally appealing offering.

Inside, it’s still dark on the ground level, because the new street-side windows are hidden behind a veil of billposters and rotting plywood. Daish is walking me through the Spencer Street side of the building, a big, open-plan bar with high tables, booths and an island bar in the middle. Moving through the unfinished development, Daish points to the other spaces: an empty plot on the corner of Bourke Street that is set aside for a simple cafe and eatery, and two more drinking spaces; one with a live performance space, cosy seating and outdoor smoking deck, and the other, the old Tropicana Bar, which has huge skylight windows on the second level.

When talking about what he has planned for the new Savoy, Daish says the pub should attract a corporate and a casual crowd because of the bar’s central location and late license (until 1am). “We’re not looking to alienate anyone here,” he says. There will be a simple and affordable pub-style menu. “It’s got to be an every-man pub, one that has a simple, good-quality offering that is attractive to everyone.”

“Six million people use the station every year and Etihad Stadium is just over the walk way. Being in this spot, we’ll attract everything from corporates who are looking to have a beer before catching the train on a Friday night, to people who are going to the football on a Saturday night. But the station traffic is also huge.”

The Savoy Tavern is scheduled to open on Thursday March 13.