Over Hot Coals With Senor BBQ

Catering company Senor BBQ has just opened a small cafe behind a record store in St Kilda. We seek out the Senor himself to ask how to make the best of your barbeque this summer. 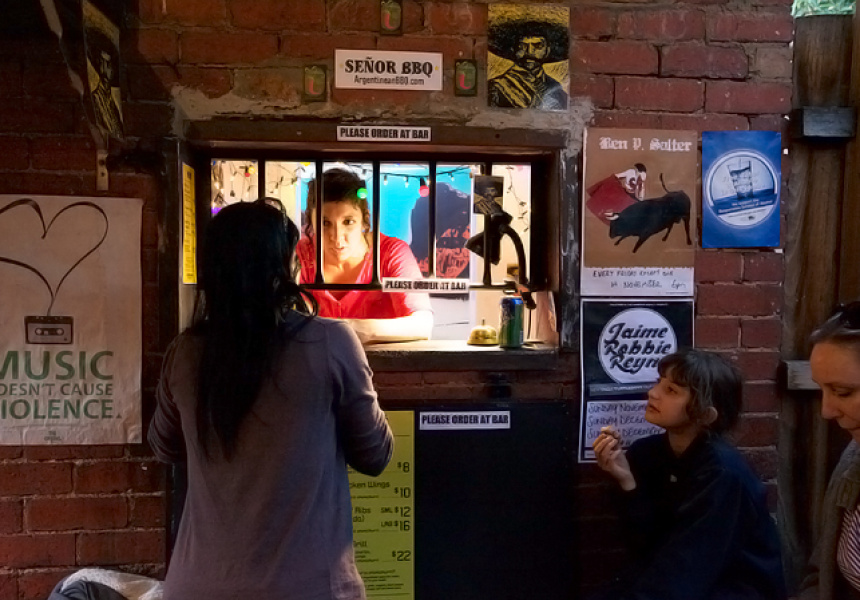 Hernan Palacio, aka Senor BBQ, started his Argentinean barbeque catering business four years ago. “It was called, Fiesta Grande Events,” says the performer, comedian and caterer, “and then exactly a year ago I changed the name to Senor BBQ and business went bang! It was fulltime and very busy.”

While the name change – not to mention with Palacio’s distinctive style – may have helped get the business more attention, other factors contributed to the growth. “I took myself more seriously, did the NEIS (New Enterprise Incentive Scheme), turned 40, became an Australian citizen (Palacio moved to Australia from Buenos Aires 15 years ago) and took full advantage of what was on offer. I think everything came to a head with me understanding the business and getting more centred with things.”

Part of this expansion is the opening of his new café concept, a small space behind Pure Pop Records on St Kilda’s Barkly Street, open five nights a week with live music and the barbeque.

In general terms, the Argentinean barbeque is a veritable meat fest, ranging from sweetbreads, tripe, chorizo and morcilla sausage to the classic Asado de Tira (beef ribs) and chicken. Palacio concentrates on three items – the beef ribs, chicken wings and chorizo sausage. “I am at a point with the business where I know that offering chorizo, chicken wings and beef is succulent and enough,” he says. “There’s no point, from my point of view, to offer a lot of different cuts.”

Cooking an Argentinean barbeque is different in many aspects to what we know as the Australian barbeque, as Palacio realised when he first arrived all those years ago. “I tell you, when I arrived in Australia 15 years ago…and had a barbeque with some people, it was very disappointing,” he recalls. “It was good that they had prawns and those kinds of things that I had never tried before, but, then they cook on the hot plate with gas…and fast! So basically, they are missing the point in every item that you are looking for in the barbeque.”

Palacio’s perspective is somewhat innate. “I come from the land of the barbeque – that’s what we do every weekend and every time two or three people get together. We go to the butcher and buy the meat, buy the charcoal, a bottle of wine and you’ve got a barbeque. That’s what you do.”

There are two factors behind a good barbeque – the first being a slow-cooking process and the second, and most important, cooking with “a hard wood charcoal,” recommends Palacio.

“The quality I’m looking for in the charcoal is slow-burn, but at the same time it has to hold good heat. You make the fire and when the coals are white, move them into the grill and that way there is no flame, just heat.”

The other thing is the shape of the grill bars. The Argentinean barbeque uses almost an L-shape, allowing the fat to drip out and away from the meat, giving a clean and lean barbeque. Palacio cooks his barbeque in a particular style too. “You let the meat release a little bit of blood, then you salt it, put it on the grill and when you see it’s ready on one side, you turn it over, once.”

He uses no oil or pepper and once it’s cooked, takes it off the grill and instead of resting the cut, spreads it with homemade chimichurri paste (his version includes olive oil, vinegar, parsley, garlic, a touch of cumin, black pepper, oregano) and serves it. It’s a delicious, intense burst of robust spicy flavour, great with some fresh bread and a glass of beer.

According to Senor BBQ, learning the art of a real barbeque well worth the time. “I would suggest to go for real charcoal, put in an effort and try a real barbeque. There’s no skill in turning on the gas,” he smiles. “The key is the charcoal – the charcoal will make the difference.

“Whatever you’re cooking, if you cook with charcoal and with patience and love, you’ll do well. You really can’t do a fast barbeque – it defeats the purpose.”