Our Most Popular Food Stories of 2015

From cereal cafes to 24-hour ramen, this is what got you hungry. 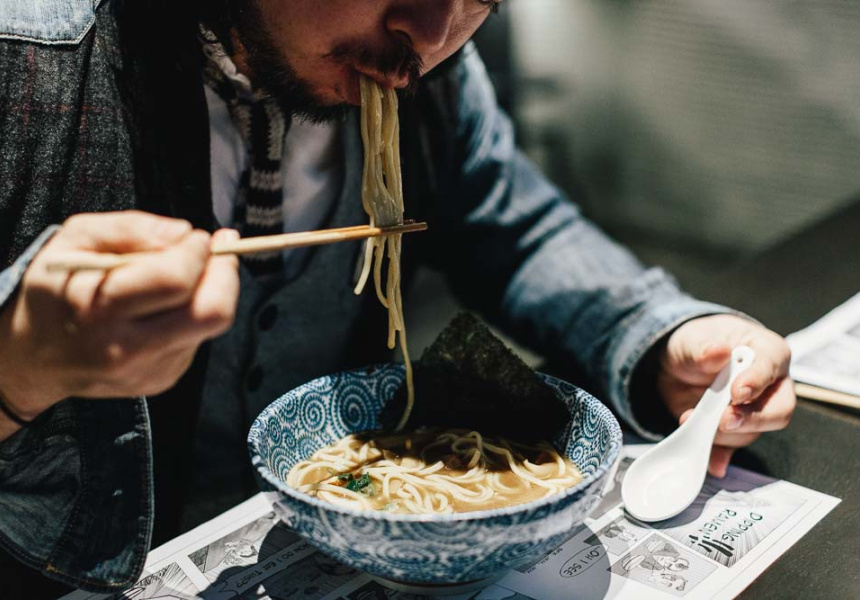 We are a city obsessed with food. When we’re not actually eating, we’re talking about it, taking pictures of it, sharing articles about it and scheduling our social lives around it.

Looking at the list below (which is ordered from most read) – it’s clear we’re still fixated on novelty ideas. And – before you roll your eyes about “Melbourne out-Melbourning itself again” – it makes sense. In a city packed with thousands of cafes and restaurants – it takes a strong but simple idea to cut through the noise, whether it’s burgers in a train carriage or ramen round-the-clock.

So what will 2016 bring? We can’t say now, but this novelty dining train isn’t showing signs of slowing yet.

Ramen hit big in America a few years ago thanks to food journal Lucky Peach (it dedicated its first issue to it in 2011), and London is just catching on. It’s had a presence in Melbourne for years, but there were a few significant openings this year that indicated a popular resurgence – and this opening of the Korean chain store with a particularly punishing timetable (for the staff, not us) was one of them.

Despite Cereal Anytime’s slightly confused concept (to educate people about how unhealthy cereal is, while serving it to them), the mere mention of a cereal cafe was a hit. With a selection of classics such as Coco Pops and Cheerios, it offered nothing one couldn’t do at home. But nevertheless – you loved it.

Serotonin Eatery had lofty ambitions. While most cafe operators are just trying to nail poached eggs and decipher cryptic coffee orders, Emily Hazell designed a cafe that prompted the release of serotonin, a neural chemical that makes us happy. Whether you swallow the science or not, the meat-free menu was a big win with vegetarians and healthy-eating folks. And there are swings for seats. Everyone likes swings.

If there’s one thing we love, it’s seeing Melbourne recognised on a world stage. In October, two local watering holes within walking distance of each other made the cut on the World’s 50 Best Bar Awards: the recently renovated Black Pearl, and the ever-classy Everleigh. Now go knock back some of the world’s best cocktails to celebrate.

How did this riverside site get ignored for so long? Taking over the disused Sandridge line platform at Flinders Street Station, Arbory Bar & Eatery spans 150 metres along the Yarra River. It’s been a hit since it opened – especially with the weather warming up. It does Espresso Martinis on tap now, too.

More ramen. Broadsheet’s ramen correspondent, Harvard Wang, breaks down the ramen boom and gives us a play-by-play on how to slurp noodles properly. In his own, enlightening words: “We are all but humble students on the path of ramen knowledge”.

Since opening in 1988, Fitzroy’s Vegie Bar has remained a fierce Melbourne favourite with its generous, cruelty-free dishes. So when we announced that the owners were opening another vegetarian restaurant right around the corner, everyone got excited. Transformer has a different personality to Vegie Bar – more mature and refined in its atmosphere and food offering, but another win for vegetarians all the same.

In January, our Sydney team noticed something strange. A new cafe that looked like other cafes – white-tiled walls, staff in chambray aprons, a prominent yellow espresso machine. But something was odd beneath the veneer. Welcome to The Corner, an experimental venture by McDonald’s. Does this mean our cafe culture is so homogenous and ubiquitous a major fast-food chain can successfully imitate the formula? Does something need to change?

In our portrait of him, Koichi Minamishima cuts a commanding figure. His white coat is crisp. His hands rest confidently on the counter. A long knife lays lengthwise in front of him. He gazes down the camera’s barrel. This is the man you want preparing your sushi, forever and always. Richmond’s Minamishima is a minimalist restaurant experience with nothing to hide behind – and it’s magic.

How could we complete this list without a burger story – especially one that’s so fun. Owned by Jeremy Gaschk and Jimmy Hurlston (of popular burger blog, Jimmy’s Burgers), Easey’s is like a restaurant designed by a 10-year-old – fried chicken and Frosties for breakfast; burgers stuffed with blue-heaven doughnuts; and dining tables in graffiti-plastered train carriages. Growing up is overrated. 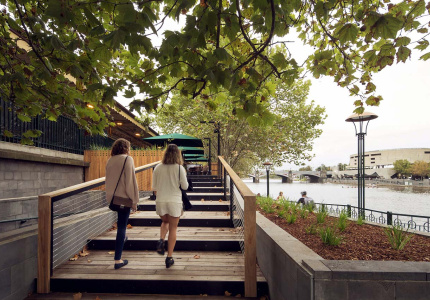 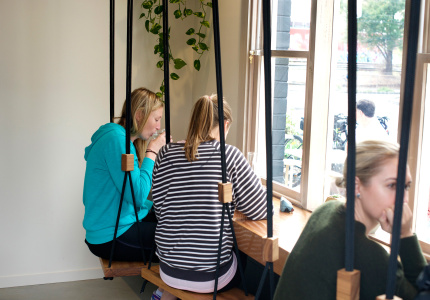 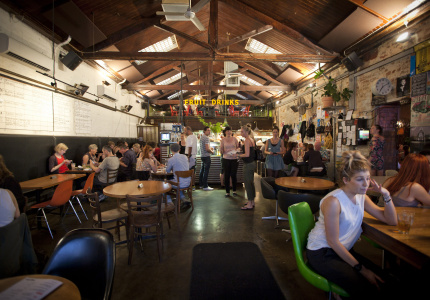