Our Bread and Butter

In line with Ketel One’s dedication to lasting quality and impeccable craftsmanship, we sat down with Pierre Issa to discuss his commitment to creating cultured, artisanal butter. 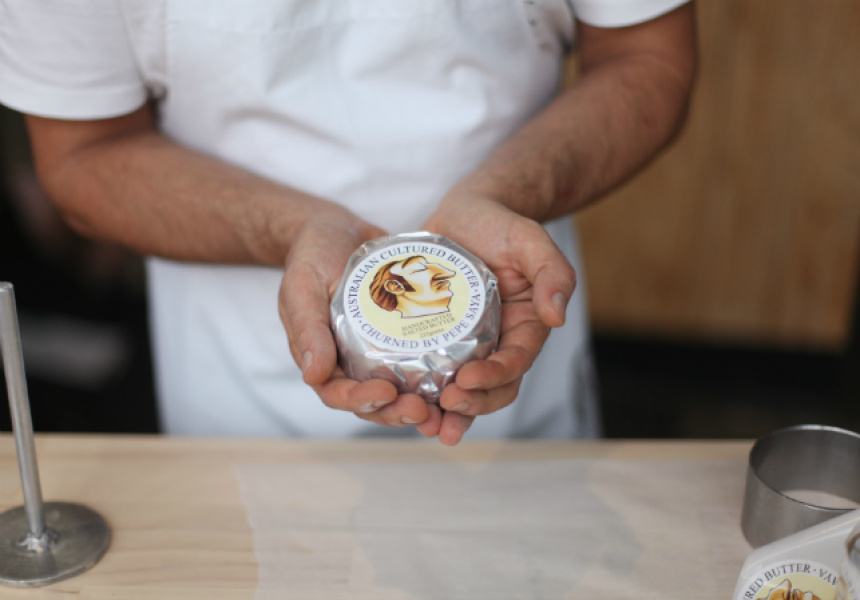 One of the first things you notice about Pierre Issa is his T-shirt. It’s plain white, save for an illustration of a superior chap in profile, looking imperiously down his long proboscis. Underneath his head are two crossed bones, a cheeky reworking of a skull and crossbones, the universal symbol for danger. It’s the T-shirt worn by the delivery drivers of Pepe Saya artisan butter, and it encapsulates perfectly the raison d’être behind Issa’s beloved business.

Making butter was not something Issa dreamed of as a child. The 37-year-old Lebanese-Australian spent the first decade of his professional life working in recruitment, but when his wife complained about a dearth of readily available desserts made from fresh local ingredients, Issa saw an opportunity. He quit his job, researched the market and founded his Homemade Fine Foods dessert company.

When Issa found himself with 200 litres of cream left over ahead of the two-week Christmas break, he decided to experiment with turning the cream into butter. “It was just for fun but nothing worked,” he recalls. “I wasted all of it as I didn’t know what I was doing.

“I took some home to my wife (who’s a big butter head), but she told me never to bring it home again!”

But Issa had been bitten by the butter bug and after months studying processes and products, he discovered there was no Australian-made artisan butter. “None of the top-end restaurants used Australian butter because they said nothing was good enough. So I decided to make the best butter I could.”

Issa named the product Pepe Saya – ‘Pepe’ being his nickname and ‘Saya’ an imaginary island oasis Issa escapes to in his head. The superior chap on the label is Issa’s alter ego and a reminder that, at least where Pepe Saya is concerned, only the best is good enough. Pepe Saya butter is made from 100 per cent local ingredients: single origin cream from jersey cows in Allansford, Victoria or Picton, New South Wales and locally sourced sea salt, along with Murray River pink salt.

But what makes this butter really unique is the fact that it’s totally handmade, just as it was when grandad was a boy. “We sour the cream down, we churn it, wash it with filtered water, knead it, get the water out, pack it and label it. That’s it. That’s butter,” says Issa. Even more appealing is that Pepe Saya is made and delivered daily, not frozen like imported boutique butters Lurpak and Lescure (let alone those tubs that pass for butter whose name we dare not mention).

Operating since July 2010, Issa’s Tempe kitchen churns out three tonnes of butter a week and 6000 litres of cream. They also sell ghee, buttermilk, crème fraiche and mascarpone. Today, Pepe Saya butter is used by some of Australia’s most acclaimed chefs: Matt Moran at Aria, Neil Perry in his Melbourne and Sydney branches of Rockpool Bar and Grill (in addition to Perry’s Qantas First Class menus), and Justin Wise at The Point, Albert Park. It is also available in countless good food stores nationwide.

Despite being the owner, Issa still refers to himself as “butter maker”, pointing out he’s in the kitchen from five each morning and helping with deliveries on their busiest day, Saturday. He’s also built and runs the website and handles the marketing. “It’s part of the journey, isn’t it? To be able to really own it, really drive it. And it’s fun,” he says. Adding to the love is his father, who makes the round metal moulds that give the butter its distinctive shape, while Issa and his 13 staff wear hats that his mother designed.

As for his future plans, Issa has just one small aspiration: world domination. “Just like Hoover is synonymous with vacuum cleaners, my plan is to have Pepe Saya synonymous with butter. Why else would you do it?”