Feast on ready-to-cook butterflied garlic prawns and eastern king prawn wontons; go all out with a party-ready platter of sashimi; or get salmon, barramundi and John Dory by the fillet. 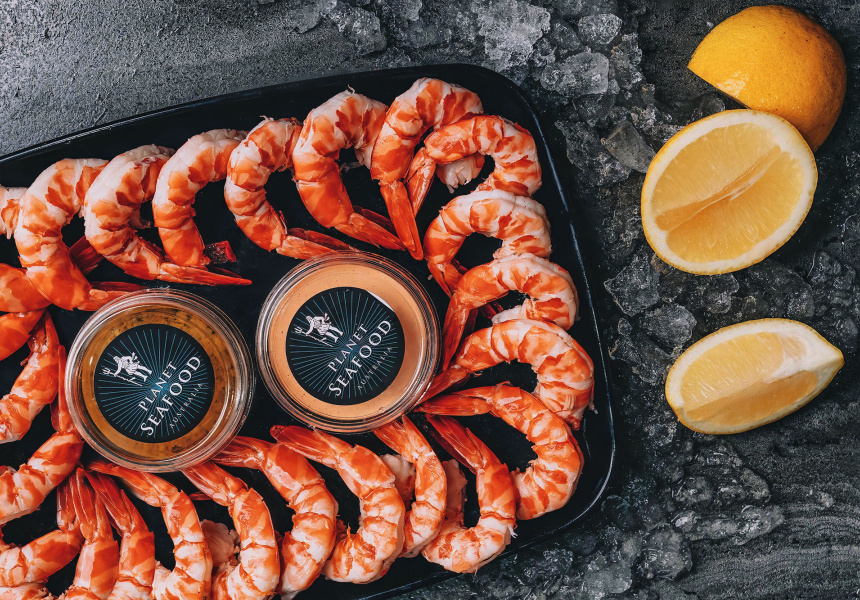 Seafood delivery services have seen a boom in recent years, thanks in no small part to the lockdowns in the major cities. No longer satisfied with the freshness of what’s on supermarket shelves, customers have started buying oysters, lobsters and prawns directly from aquaculturalists and fishmongers. On top of whole fish and fillets for Friday night’s dinner, these companies deliver blooming platters of sashimi, cooked southern rock lobster and live mussels – and in most cases you can order for same-day delivery.

East 33
East 33 is one of Australia’s largest producers and suppliers of premium Sydney rock oysters. It started out in 2019 as a collective of oyster farmers, operating up and down the NSW coast, to service the restaurant industry more efficiently. Since the pandemic, the company began shipping its bivalves to Melbourne via two packs – the $69 Discovery Kit of 24 oysters, shucked or unshucked, or the Entertainers Pack of 60 oysters for $60. Each pack contains a variety of oysters showcasing the flavour profiles of different regions. Some are saltier with more pronounced minerality, others are sweeter, or richer in umami. Deliveries to Melbourne metro addresses are made from Monday to Saturday through Manettas Seafood Market. If you don’t have the right instrument to pry open your oysters, add a shucking knife for $9.
east33.sydney

Halo Club
Prove your love of seafood with a monthly subscription for oysters grown and harvested from the waters off Coffin Bay, South Australia. Halo Club sends three dozen Pacific oysters to its subscribers every month for $100 a box. It’s one of the largest organically certified oyster producers in the southern hemisphere, and live oysters arrive at your doorstep sealed in a chill bag, wrapped in burlap and sitting on an ice pack. If monthly is too much commitment, you can order a one-off box and have it delivered almost anywhere in Australia. Each box comes with a dressing, such as a strawberry, champagne and black pepper mignonette, which changes each time. Order by mid-month to be included in the next harvest.
haloclub.com.au

Oceania Seafoods Select
Dating back to 1983, Oceania Seafoods Select is one of Melbourne’s premium seafood suppliers. Founder Yoshi Arai started out delivering tuna in his van to the handful of Japanese restaurants in Melbourne at the time; now his team services some of the best restaurants in the industry, including Kisume. It works with local fisheries to source salmon, tuna, snapper, kingfish and products such as toro (fatty tuna belly), sea urchin, scallops and crabs. The online store also has a range of frozen seafood and platters that take the stress out of planning a seafood spread. There’s a minimum order value of $60, and you can get fish delivered across metro Melbourne areas free for orders over $100.
osselect.com.au

Ocean Made
Though Ocean Made has currently paused its delivery service, you can still order online and pick up at the Collingwood shop. The team buys direct from local farms and sources wild-caught fish at the markets each morning, supplying restaurants including Attica, Maha and 400 Gradi. It’s been operating a shop next to its factory in the backstreets for years, but set up online ordering in about 2020, when the city went into lockdown. You can order Tasmanian salmon, sashimi-quality yellowfin tuna, barramundi caught in the Northern Territory, Victorian scallops, Appellation oysters and more.
oceanmade.com.au

Clamms Seafood
Clamms started more than 30 years ago as a St Kilda fish’n’chip shop, but it grew into a wholesale company specialising in wild-caught fish from Victorian bays and inlets. It supplies fresh fish to restaurants Brae, France Soir, Stokehouse and Supernormal, among others. You can order its catch online, including crayfish, blue swimmer crab, diamond shell clams, calamari, John Dory, salmon and flathead. All Clamms products are pre-portioned and vacuum-packed to extend shelf life. You can also buy goods from other companies, such as frozen vegetables, dim sims, beer-battered chips and onion rings. Clamms delivers to metro Melbourne for a small fee and it’s free for orders over $100, except during busy periods such as Easter and Christmas.
shop.clammsonline.com.au

The Fish Shoppe
Josh and Renee Pearce now have three retail outlets, in Balwyn, Collingwood and South Melbourne Market. The local fishmonger works exclusively with Australian and New Zealand producers to ensure its catch is as fresh and local as possible. It offers home delivery via Your Grocer, including a dozen rock oysters, live mussels, whole flounder, cooked lobster, banana prawns by the kilo and Abrolhos Islands scallops. Sustainability and traceability are core to the Fish Shoppe’s ethos, and it is proud to be the first independent retailer to obtain Marine Stewardship Council Chain of Custody certification. Its products come in compostable packaging, too. The minimum order is $60 and orders close at 11am for same-day delivery.
thefishshoppe.com.au

Red Coral Seafood
If it’s in season and it swims, Red Coral will bring it to your door. The wholesaler’s main business is supplying quality seafood to Melbourne’s restaurants, but during the pandemic the 30-year-old business started delivering fresh fish to Melbourne homes too. You can order Pacific oysters from Tasmanian waters, rock oysters from the NSW east coast, kingfish from South Australia and barramundi from Queensland. The family-owned business delivers to most parts of Melbourne and orders placed before 2pm will be delivered the next day. All orders are made via Melbourne Food Squad, which operates from Tuesday to Saturday. On the site you’ll also find fruit and veg boxes, frozen food, meat and dairy, plus pasta, smallgoods and six packs of beer.
melbournefoodsquad.com

Planet Seafood
Entertaining? Planet Seafood specialises in ready-to-serve platters, including one with cooked crayfish, marinated and cooked prawns, Greek-style octopus, smoked chilli mussel meat and smoked salmon. You can also order a platter of 24 shucked Coffin Bay oysters with salmon caviar, vinaigrette and lemon to your door, or plates of cooked and peeled king prawns for four to six people. It also delivers whole and filleted fish, including ling, King George whiting, flathead, salmon and swordfish. Most Melbourne suburbs are covered and orders over $200 are shipped free of charge.
planetseafood.com.au