From one of the crew behind Peaches, Dexter and Takeaway Pizza, get herby, Italo-Japanese sangas, Cubanos with smoky pork belly, and “dirty but fresh” Chilean hotdogs. Plus, Caramilk cookie and soy sauce ice-cream sandwiches. If you missed the opening of Nico’s Sandwich Deli in the CBD, you’re forgiven.

Lockdown 2.0 came at a particularly unfortunate time for the tiny takeaway-only sandwich and coffee shop. “We opened for one single day … but we managed to sell around 250 sandwiches,” says co-owner Tom Peasnell, who’s one of the crew behind Peaches, Cheek, Dexter, Takeaway Pizza and Kenny Lover.

Four months later, instead of immediately reopening in the CBD, Nico’s is heading to Fitzroy for a five-month outdoor pop-up, starting this Saturday. You’ll find it on the corner of Brunswick and Kerr Streets – opposite The Evelyn – with space for 28 people under its big blue umbrellas.

Headlining the menu is the Nico’s Original: a tomato, basil, buffalo mozzarella and crisp cos lettuce sourdough sandwich that’s been funked up with a creamy sauce laced with herbs, Japanese shio koji (an umami-rich seasoning), nori and kombu.

Other options include a brisket-and-pork meatball sub with bone marrow and a hearty, smoked cannellini-bean sugo; a Cubano with pork belly (smoked at Dexter), leg ham, swiss cheese, dill pickles and mustard; and a Chilean hotdog – aka a completo – which includes a frankfurter, “dirty but fresh” tomato salsa, avocado and kewpie mayo.

There’ll also be batch-brew and espresso coffee by Seven Seeds, and two types of ice-cream sandwich: Caramilk cookies stuck together with soy sauce ice-cream, and white-chocolate-and-oat cookies with a chewy (and vegan) rhubarb and coconut ice-cream.

In the coming weeks, the team will also introduce a breakfast menu and vino on tap.

The Nico’s Sandwich Deli pop-up runs from November 7 to March. 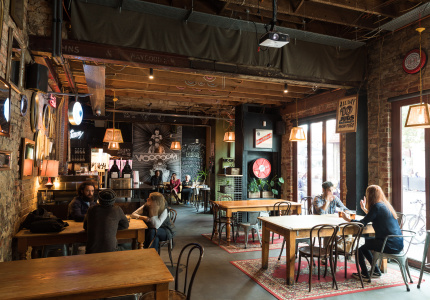