One of Australia’s top coffee roasters, Ona, has opened its first Melbourne outpost, with a truly groundbreaking menu of 20 coffees. And its kitchen is cooking fried chicken rolls, and maple hotcakes with lemon-thyme whipped ricotta and fermented honey. 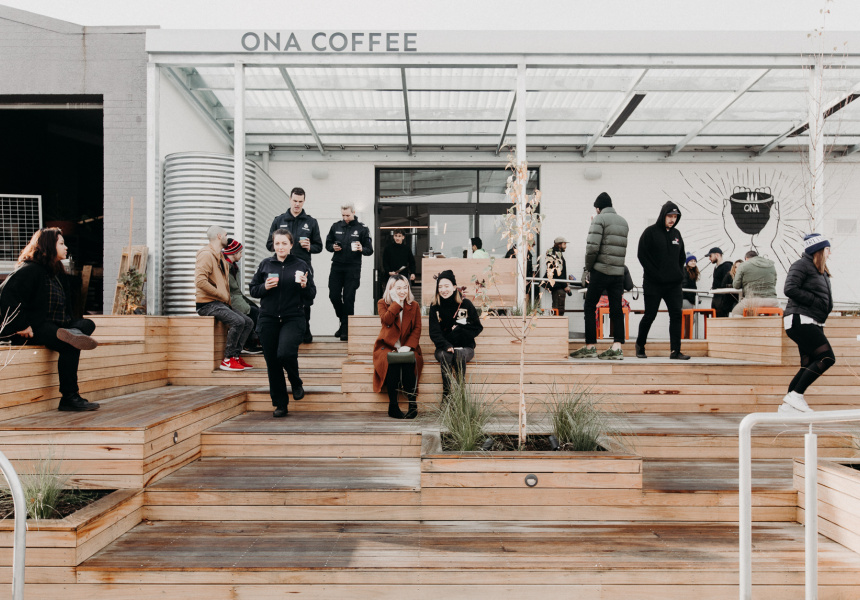 Restaurants have wine lists. Why shouldn’t cafes have coffee lists? That’s the question at Ona Coffee, which has opened off Sydney Road in Brunswick.

The roaster has been operating in Canberra since 2008, where it now runs four unmatched cafes and roasts beans for more than 100 others across Australia, including Collingwood’s Plug Nickel and Fitzroy’s Calere.

“At the moment we have only 20, 25 coffees on offer [at Brunswick],” says owner Saša Šestić, without any trace of irony. “But we’re looking for that menu to grow to 40, 50, 60 coffees, so you can choose not only the coffee you like, but to compare vintages as well.”

After roasting, the reserve beans are vacuum-packed into individual serves and frozen at -19 degrees celcius. Stored like this, they will keep for years, maybe even decades. Cup prices range from $5 for standard blends to $25.50 for rare, exceptional and award-winning beans, with most under $10. Paper cups are an extra 50 cents to encourage takeaway customers to bring reusable cups, and may even be phased out in future.

This is only the second time anyone in Australia has rolled out this concept, offering past crops alongside current ones. The first time was in 2018, when Šestić and his team opened an Ona cafe in Marrickville, Sydney and debuted their “freezer menu”.

“In Marrickville we got some interesting press, with people saying, “Why is it $16 for a coffee? You’re ripping people off,” Šestić says.

Like wine, coffee is an agricultural, labour-intensive product that tastes of where it was grown. When served black, it’s just as nuanced and complex, and the way it’s fermented and processed has an enormous impact on the final product. And it takes a commensurate amount of knowledge and care to get all these things right.

And yet coffee isn’t afforded the same importance as wine. It’s not an occasion. Most of us just stick to drinking each cafe’s default blend and baulk at paying $5 a cup, let alone $10, $20 or the $150 a South Yarra cafe was asking in 2018 for one of the world’s finest coffees.

Ona might help shift this outlook. Even compared to world-leading local roasters such as Seven Seeds, Market Lane and Small Batch, its approach to sourcing, processing, warehousing, roasting and brewing is impressive. These will be some of the cleanest, most vibrant coffees you’ve ever tasted.

White-coffee drinkers should start with Raspberry Candy, the blend that won Šestić the 2015 World Barista Championships. As the name suggests, it’s reminiscent of fresh red berries, with a touch of confectionery. There are three other espresso blends to choose from, plus single origins from Colombia, Honduras, Kenya, Panama and Ethiopia. On filter, the natural-process Violet, from the prestigious Ethiopian region Yirgacheffe, tastes like iridescent purple: violets, blackcurrant, grape.

Sister company Project Origin provides Ona’s beans. Its 10 employees travel constantly, building relationships with coffee growers (more than 100 in 10 countries, thus far), providing equipment and helping to improve local practices. For the sake of quality and consistency, everything is still roasted at Ona’s temperature- and humidity-controlled facility in Canberra.

Coffee is only one part of Ona’s dominance in the capital. Food is another, and the company has brought the same one-two combo to Brunswick.

Head chef Jerome Felix co-founded The Cupping Room and Highroad, two of Ona’s other cafes. His food menu here is half the size of its coffee counterpart, with just eight mains, a handful of sides and three options for kids. There’s fruity chia pudding; the requisite avo toast; salmon gravlax with confit beetroot and horseradish cream; and bacon, sausage and eggs in a brioche-like pain au lait bun.

For all the pageantry surrounding the coffee, this pared-back menu and the matching, very understated Breathe Architecture fit-out make Ona approachable for anyone, regardless of what they think about coffee. In this respect the cafe is playing the long game.

“Us sharing too much excitement and too much passion can scare people,” Šestić says. “If they like white coffee and that’s all they’re here for, we want to provide them with that, but the best version of it. And then build the trust so they say, ‘Oh, I really liked that. What’s next?’”

This article first appeared on Broadsheet on June 12, 2020. Menu items may have changed since publication. 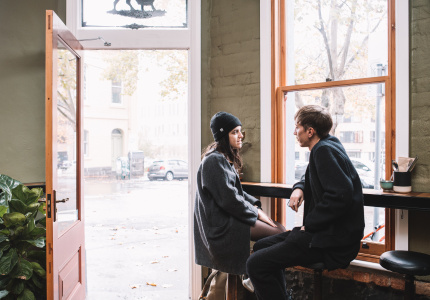