Behind the window of an ordinary doughnut caravan in Melbourne’s west: a man who never thought he was living an extraordinary life. 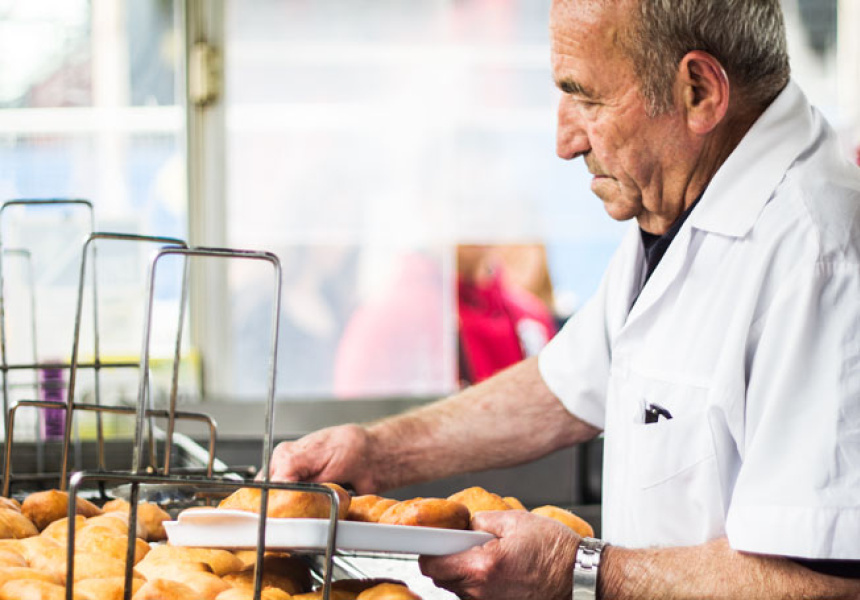 Every day, Nick Tsiligiris popped the window of his caravan at Footscray Station and started frying doughnuts. Wearing his white smock, he rolled each hot dough ball across a bed of sugar and finished it with a squeeze of red jam from the snout of a dolphin-shaped ceramic dispenser.

He opened the tiny Olympic Doughnuts in 1979. He never diversified his business. Never sold drinks or lollies. Or even different kinds of doughnuts. Only his employees changed; generally they were young migrants new to Australia.

Some afternoons, when it was quiet, he’d turn up the Greek radio and dance with them around the tiny caravan.

In April last year, the Olympic Doughnuts kiosk shut. It sat quiet for weeks, and then months. In October, “R.I.P.” signs started appearing at the shop. Online, outpourings of grief spread quickly.

Tsiligiris’s daughter, Gina Hasapis, was forced to make a statement on Facebook dispelling rumours her father had died.

In January, the family regretfully announced Olympic Doughnuts was over; Tsiligiris wasn’t coming back. A new vendor is already preparing to move in.

Hasapis confirms her 81-year-old father is stable but needs 24-hour care. She describes the outpouring of support and offers of financial help from the Footscray community and beyond as “overwhelming”.

“I’m not sure what I expected, but I didn’t expect this,” she says. “It’s just taking solace in knowing how much he was regarded and loved, and that people knew the man I knew.”

Tsiligiris arrived in Australia from Greece in 1966, following his then-fiancé, Nikki. He worked at the Olympic Tyres factory (this is unrelated to the name of the doughnut shop according to his daughter), then a cheese factory. He met a man who taught him how to make doughnuts – a man from whom he would buy the famous Olympic caravan.

Hasapis remembers helping in the shop as a young girl and noticing that any child who came to the window got an extra doughnut.

“It was his generosity. He cared for people,” she says. “Footscray was a place where you saw the battlers. There were a lot of people doing it really tough. A lot of kids out there without any guidance, a lot of people with social problems. He never judged them, he never turned his back on them. In turn, they took care of him.”

About 30 years ago Tsiligiris was threatened by a group of young people while he and his daughter were closing the store. He handed over his work bag, along with a few bags of doughnuts he was taking home to his family. They backed off, taking neither. According to his daughter, Tsiligiris insisted they take the doughnuts with them anyway.

Between 2009 and 2015, Footscray Station underwent a massive redevelopment as part of the Regional Rail Link project. While a number of shops in the path of the construction were acquired, Olympic Doughnuts was untouchable.

(There’s an irony in the fact the only shop not asked to move was one on wheels.)

Laura Stewart, the project’s community relations adviser for Footscray at the time, explains keeping Olympic Doughnuts open was actually in the station’s redevelopment contract due to community sentiment.

“When we started planning the work in and around Footscray we had to redevelop the whole station and plan everything around Nick,” she says. “Everything from where the construction sheds could go, to where a crane could go.

“I can honestly tell you, it’s unheard of.”

It was a weird situation: Tsiligiris didn’t own land, or even pay rent – there was nothing formally to “acquire”.

Nonetheless, it became Stewart’s job to take care of Tsiligiris during the construction process and they became close. She bought him a fan during summer, and even ordered the construction workers to carefully dig up and re-pot his late wife’s rosebush so it could be relocated with him.

She brought in an architect to build him a permanent new shop at the station, designed for his workflow and even his height (the cupboards are low).

Then it was time to bury the caravan for good. While some considered it iconic, the graffiti-scrawled, OH&S-nightmare of a van was one concession the station’s developers couldn’t make.

“The caravan wasn’t that good,” Stewart says, laughing. She refers to Tsiligiris’s “custom-made” proving oven, which was basically a Bunsen burner in a cupboard. One day in 1997 it exploded and Tsiligiris spent three-months in hospital.

What people don’t know is there were actually two Olympic Doughnuts vans – one out the front for service, and one parked just behind it. The latter was his storage area, filled with old tubs of oil and a little bed where he’d take a midday siesta.

Both, unfortunately, had to go. “He understood,” Stewart says. “He kept the old signage, which gave him a link back to what was.”

There’s now an Olympic Doughnuts logo embedded permanently into a tile at Footscray Station, complete with the Olympic rings (arranged in a more trademark-friendly way) and leaping dolphins.

Despite the media attention (which ramped up in the past decade), Tsiligiris never understood the interest others had in him.

When filmmakers Ian Tran and Rachel Morssink made a short documentary about Tsiligiris last year called Olympic Nick: A Donutumentary, Hasapis says they almost couldn’t get him to the premiere. “You could have pulled his fingernails out one by one, he would have preferred that than be there and have all the attention. We had to drag him there.”

But if not for recognition, why would a person choose to perform the same simple task, day-in day-out, for so many decades?

Tran explains Tsiligiris would say to him, “Everything in life has a process, like the doughnuts I make. And it’s just following that process.”

“He took pride in what he did,” Hasapis says. “Some days when he felt the dough wasn’t right, he didn’t open up.”

She explains that after his wife’s passing from pancreatic cancer in 2005, the family tried to convince him to stop working. But he wouldn’t.

He wasn’t a man to go out for coffees, or go to the pub, according to Hasapis. He loved being around people – and he loved the variety of people. He didn’t like serious conversations.

“He just liked light-hearted banter, and I think that served a purpose. It gave him something to do [during what would otherwise] have been a really lonely day,” Hasapis says. “We were off his hands, mum passed away. What does a man of 68 do all day? When all he’s done is work all his life?”

In 2014 Tsiligiris took four weeks off and temporarily closed the shop.

“We actually saw a decline,” Hasapis says. “He started looking tired and ragged, he started going to bed at eight o’clock each night. He’d never do that before. But he said, ‘what have I got to do?’ He aged.”

She explains, for her father, turning up to make doughnuts every day wasn’t just about work.

“It was about being part of a community. He needed the community. It was his safety net. He got so much out of it.”

It was a love requited.

As filmmaker Ian Tran explains, “Footscray is such a diverse community, not only culturally but economically. There are a lot of reasons why people shouldn’t necessarily get along.”

He speaks of the tension between different groups, most recently the attacks on “hipster” businesses in the suburb.

“People realised there was one thing they had in common, and it was a doughnut. And Nick brought these people together with his generosity and his spirit. I think that’s why the community rallied around him so much.”

For Footscray’s community-relations officer Laura Stewart, Tsiligiris became a symbol of the diverse, working-class suburb in which only 40 per cent of its residents were born in Australia.

“Nick represented everything that’s traditional, and even into the future, of what Footscray is,” she says.

“He came to Australia from another place. He’s kind of a non-English-speaking small-business owner. He’s open early, works ’til late. He makes food – and Footscray’s all about food. He brings together all the characteristics of Footscray into one little human being.” 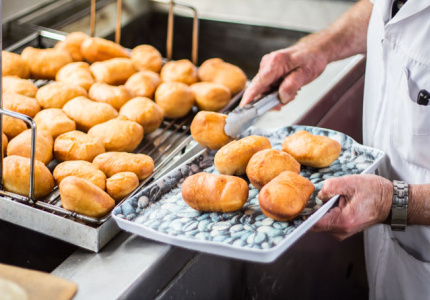