Everything you love about fresh Japanese cuisine and Australian seafood in a calm, casual room. 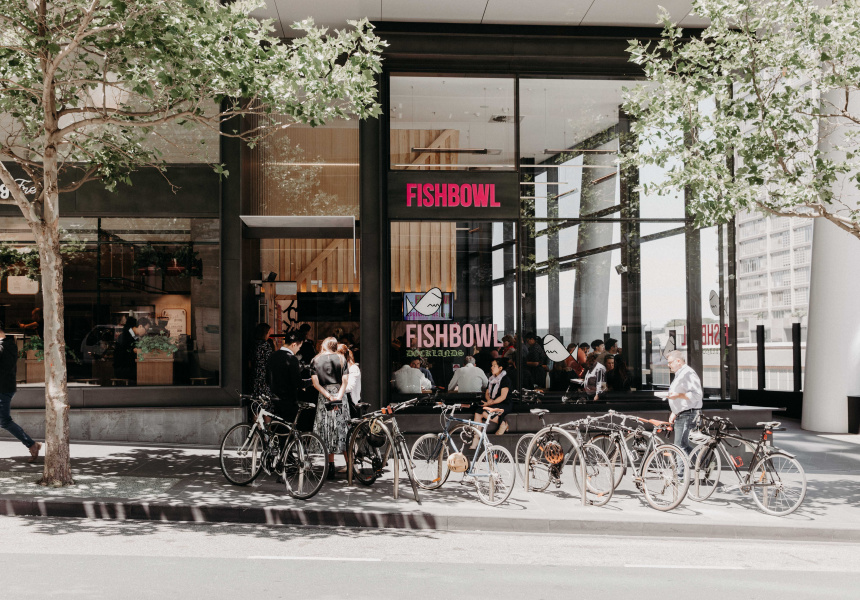 When you think of the Docklands end of Collins Street in Melbourne’s CBD, typically you picture grey buildings and grey suits. Something that might catch your eye, though, is Fishbowl – a colourful new Japanese-inspired salad bar. It’s the first Melbourne outpost of the chain that began in Sydney in 2016.

The playful 30-seater in the Melbourne Quarter development offers a healthy alternative to typical quick-service restaurants – there’s everything you love about fresh Japanese cuisine and Australian seafood crammed into easy eat-on-the-go bowls.

“It’s fast food – it just doesn’t necessarily look or feel like it,” says co-founder Nathan Dalah, who opened the first Fishbowl in Sydney with two friends, Nic Pestalozzi and Casper Ettelson, while they were still at university.

Dalah “bounced around a few degrees” at university – law, journalism and commerce – before realising his passion for food and a healthy lifestyle. After nine months of brainstorming with his classmate Pestalozzi, and hiring Ettelson as their first official employee, the trio opened Fishbowl Bondi in 2016. Just over three years later they have 15 stores in Sydney.

Bowls are made with fresh Australian tuna and salmon, but there are also beef, chicken and vegetarian options. Think tuna sashimi with wasabi peas; tofu and cucumber with tamari almonds and shallots; and braised beef with lemon shoyu dressing. You can also build your own custom bowl. Dalah says the menu was mostly inspired by his travels to Japan and growing up in an Israeli family that loves cooking.

“Walking around in Japan, you’re exposed to ultra-traditional cuisine with hyper-progressive techniques behind it,” he says. “That’s the most interesting thing about Japanese culture to me, and we tried to put our own spin on that with Fishbowl.”

Fishbowl teamed up with local architects Herbert and Mason for the interior design. The firm has worked on some of Melbourne’s better-known venues, including Vue De Monde, the Terminus Hotel and Dinner by Heston.

The dining areas in Fishbowl are clean, streamlined, clutter-free and calm. Minimal timber furnishings sit on concrete floors, while busier design features, such as a Keith Haring-esque mural, are found in the open kitchen.

For now, Fishbowl is open 11am to 3pm on weekdays, but the plan is to expand to nighttime trading areas in the city in the near future, as it has with its Sydney stores.

“I hesitate to say it, but we see the Melbourne food landscape as a grown up version of Sydney – it’s a little bit more advanced,” says Dalah. “So it’s a natural progression – a graduation from Sydney, in a way.”

This article first appeared on Broadsheet on November 19, 2019. Menu items may have changed since publication.