This light-filled new spot is the bakery's biggest yet, and it’s open until 10pm. Get Vegemite-bechamel pastries for breakfast and sourdough cacio e pepe pizza later on (sriracha-spiked Bloody Marys, however, are on offer all day long). In good news for south-side sourdough devotees, the Rustica empire has finally crossed the river, adding a South Yarra flagship to its existing portfolio of Fitzroy, Hawthorn, Maribyrnong and dual CBD locations. And for the first time, it’ll be serving dinner.

On a Chapel Street corner site just opposite the Jam Factory, the 100-seat venue is the biggest Rustica to date, taking the title of flagship bakery from the original Fitzroy space.

“Up until now, we’ve been restricted by the size and layout of our humble Fitzroy flagship,” says founder Brenton Lang. “The move into the Melbourne dinner scene was inevitable.”

Head chef Sidney Tor is behind a compact collection of dishes carried over from other locations, and a handful of new dishes.

By day there’s scrambled eggs with pickled chilli and manchego (sheep’s milk cheese originating in the La Mancha region of Spain); lobster benedict on a milk bun with onion rings and salmon roe; and a fried chicken burger with gochujang mayo. Amped-up pastries might include a flaky scroll packed with creamy Vegemite bechamel; or a buckwheat kouign amann, a buttery French croissant-like disc that arrives with salted caramel, poached fruit and mascarpone chantilly cream.

At night, hand-stretched sourdough pizzas come into play – try the salami, broccoli and smoked mozzarella number; or the cacio e pepe pizza with mushrooms. There’s also linguine with king prawns and Moreton Bay bugs, and gnocchi with lemony ricotta. Many of the baked goods are available after dark, too, so if an eclair for dinner is your bag, that’s encouraged.

The drinks list is predominantly local. There’s wine from Red Hill’s Polperro, and beer from Noble Boy and Abbotsford’s Bodriggy. The cocktail menu is short but satisfying, available day-to-night. Try the Bloody Mary, which comes with a good whack of sriracha, or the Negroni made with rosé vermouth.

Architect Fiona Drago is behind the neutral fit-out, which includes marble and timber tabletops, and hanging greenery. Large street-facing windows provide topnotch people-watching, and ceiling-high glass panels give diners a glimpse of things behind the scenes – so you can have your cake, and watch it being baked too. 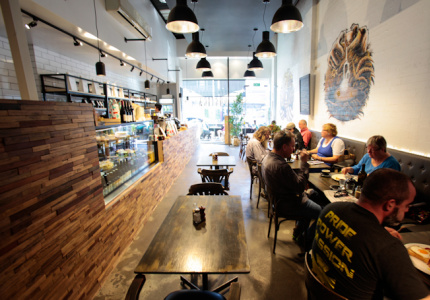