Chef Hamed Allahyari escaped Iran by boat in 2012. Now he’s helping other refugees and asylum seekers find work, and sharing the flavours he grew up with. Try the omelette with feta, fresh mint and dill; homemade sour-cherry tea; and a colourful, Persian take on the bliss ball. 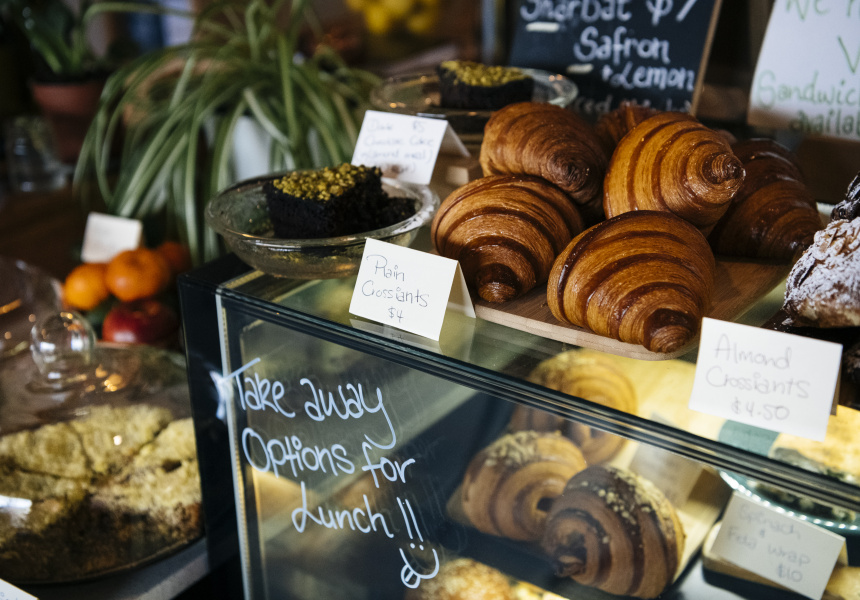 In 2012, Hamed Allahyari was running a traditional Persian restaurant in Tehran when he was forced to flee the country because his views on religion differed to those of the government. Along with his wife, who was four months pregnant at the time, Allahyari crammed into a small boat with 118 other people, ending up first in Indonesia, then on Christmas Island where the couple was detained. Five months later, Allahyari was given a bridging visa and the pair headed to Melbourne.

It was two more years before he was able to secure a working visa, but despite approaching dozens of restaurants, he couldn’t find a job.

“It wasn’t nice going around all of those restaurants and having people say no,” he recalls. “If you have a job, you make money, you can buy your things, you meet people and become part of a community.”

Eventually, while volunteering at the Asylum Seeker Resource Centre (ASRC), he found paid work with Free to Feed, a pop-up cooking school where all classes are run by asylum seekers and refugees.

At the ASRC he met his business partner, fellow volunteer Jen Morillas. Wanting to help other refugees and asylum seekers find work, they opened Cafe Sunshine & Salamatea in July, just over the road from the Sunshine train station. They currently employ four staff from refugee backgrounds in the kitchen and four more front-of-house.

Before opening, the pair spent six weeks making the former West African cafe their own – painting the ceiling black and the walls pink and white, and installing custom-built furniture (the bar, tables and bookshelves).

Walking in, it’s hard to miss the enormous platter of colourful bliss balls on the counter. Despite the fact that bliss balls aren’t traditionally Persian, Allahyari came up with an idea after seeing them around Melbourne. His are made with dates and tahini, and rolled in Persian barberries, rose petals or sesame seeds. The display is a feature in itself, highlighting the rough, multi-coloured stone counter Allahyari and Morrillas inherited.

Teaching Melburnians to cook helped Allahyari work out which dishes to put on his menu. Try the date omelette, called khorma, which is the Persian name for date. It’s a sweet dish, and Allahyari adds butter and a little cinnamon to finish.

“You have it in the morning time, to make you strong,” he says. “To finish the day with enough energy.”

He describes another omelette, one with feta, fresh mint and dill, as a “home omelette”. “We don’t have that in any cafes in Iran; it’s from my grandma. She made it for me and all my cousins,” he says.

Noon o panir o sabzi – which means bread, cheese and herbs – is another Iranian breakfast staple. Here, it’s Turkish bread served with Persian feta; a walnut mix; jam and butter; tahini mixed with grape molasses; and halva. All of this comes on one plate with black tea. Because it’s a little sweet, you need something to wash it down with, explains Allahyari.

After dark the eatery goes by Salamatea, with an evening menu of simple Persian fare. Start with the dadami (“from my father”) dip which adds mint, dill and basil to labne with some chilli and red onion (Allahyari learned the recipe from his father). Next, get the fesunjun, a sweet-and-sour chicken stew cooked with pomegranate molasses, walnut paste and saffron, and served with saffron rice and pistachios. Allahyari has created his own vegetarian version of the dish with tofu, too.

Another taste of Persian home is the ghormeh sabzi, a stew considered by many to be the national dish of Iran. Ghormeh means fried and sabzi means herbs, and Allahyari’s tangy, savoury version starts with fried dill, mint and basil that’s then added to lamb, dried lime and kidney beans.

The $40 banquet is an excellent entry point to understanding Persian flavours. You’ll start with bread and dips (such as hummus or beetroot), followed by vine leaves filled with rice, and some chickpea-and-bean felafel. There’s a choice of main dish, then you’ll finish with a bliss ball or pistachio baklava.

The drinks list has a selection of Victorian wines and a couple of beers from Two Birds, but don’t miss the tea. Salamatea is a play on the Persian word salamati, which means “cheers”, and also references the Iranian love of tea. Allahyari makes his own sour-cherry and saffron teas – the latter dubbed “giggle tea” because of its supposed anti-depressant properties.

The team is also aiming for zero waste, using glass jars instead of takeaway cups, which you can return any time of day to the milk crate that sits outside the cafe. Empty wine bottles are returned to Rewine for re-use; Schulz Organic Dairy milk is decanted from a 10-litre vat; almond and soy milks are made in-house; and Waste Ninja collects compost.

You can buy books, too, from a small selection highlighting local authors, people of colour and with culturally diverse backgrounds, and authors from the LGBTQIA+ community.

This article first appeared on Broadsheet on November 15, 2019. Menu items may have changed since publication.