It launches with a set three-course menu, but the chef – who’s cooked at Bar Lourinha and L’Hotel Gitan – draws on the Hebrew idiom, liftoach shulchan, covering your table with a spread of dishes. So the first course is really six-in-one. 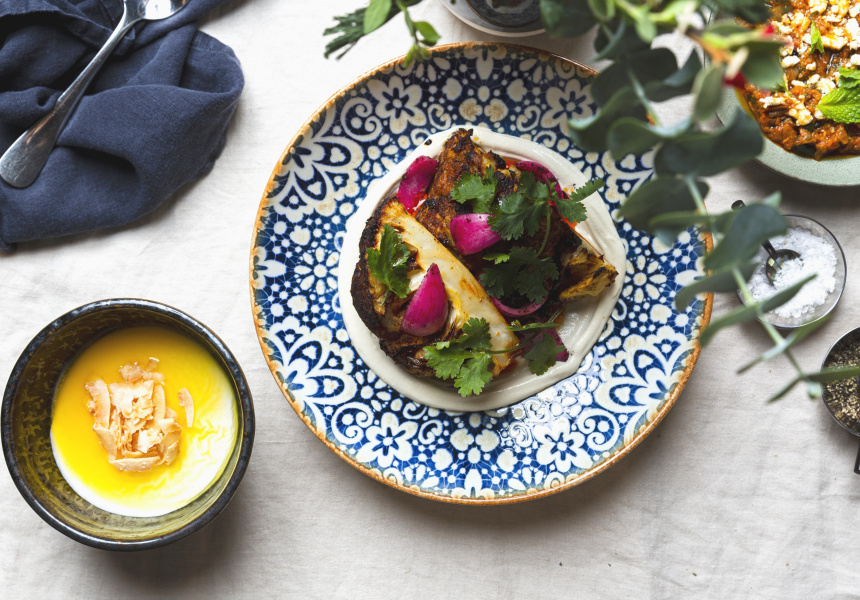 “The first thing I thought was, ‘This is dead.’”

When lockdown began, Adam Faigen was getting ready to open modern Israeli restaurant Golda. He’d been searching for a site for the better part of a year.

But Golda lives on, just formatted a little differently to what he originally had in mind. It’s now running as a pop-up (instead of a standalone restaurant as planned) located inside his other restaurant, Gramercy Social, on the ground floor of Prahran’s Cullen Hotel.

Faigen faced another change of plan when it came to the menu. The original idea was to open a venue that served both Sephardic and Ashkenazi Jewish food. The former draws influence from warm-weather Mediterranean regions such as Morocco, Italy, France and the Levant, and generally includes more fresh fish, vegetables, fruits and spices. The latter – which originated in the colder climates of Central and Eastern Europe – involves more potatoes, smoked fish, and preserved and pickled foods.

But chef and Golda co-owner Rotem Papo, who's worked as head chef at Bar Lourinha and L’Hotel Gitan, suggested featuring a broader mix of Jewish culinary influences, including dishes that many wouldn’t consider typically Jewish (though his mother’s chopped liver, a classic Ashkenazi dish, features on the opening menu).

“Israeli cuisine, the definition of it is not far from Australian cuisine,” says Papo, whose has Moroccan and Bulgarian heritage. “It has lots of different cultures coming from all over the world, each bring their own cuisines, and that makes it what it is.”

With the help of interior design agency Homeroom Studio, the team has temporarily transformed part of Gramercy (which will remain open by day) into Golda. A Persian-inspired rug greets you at the door; down lights replace the old fittings to accommodate cream floral arrangements that hang from the ceiling; and palm-shaped hamsa symbols feature in geometric artwork.

Faigen and Papo say Golda doesn’t serve Israeli street food. It’s more about sitting down and sharing lots of dishes, similar to how they both eat at home with their extended families.

The three-course set menu ($55) presents more like a feast. A Hebrew idiom, liftoach shulchan, refers to covering a table with a spread of salads and condiments. So dinner at Golda kicks off with salatim (salads); hummus; baba ganoush; Papo’s mother’s chopped liver with caramelised onion and grated egg; seasonal pickles; and laffa (Iraqi flatbread).

Next, you might share Moroccan-style snapper with a capsicum, chilli and coriander sauce; pomegranate-and-cumin-glazed beef cheek with beetroot and toasted walnuts; Israeli cous cous with butternut pumpkin; and a whole shawarma-spiced cauliflower.

The final dish is malabi, an ancient milk-based pudding (similar to blancmange and panna cotta) that’s popular throughout the Middle East. This version is flavoured with citrus, cardamom, honey and toasted coconut.

“Things fell into place a little bit and we’re hoping something really good comes out of this,” Faigen says of the lockdown. “It’s the Jewish story – people start humble, work hard and at the end of it they have family and a life around them.”

Golda is currently open for dinner only, and will introduce an à la carte menu from June 22.