From the owner of Section 8, Ferdydurke and The B.East, this new dive bar in the old Belleville space was made for good times. The Southern American menu includes triple-cheese jalapeño poppers, burgers and vegan options. When Maz Salt (The B.East, Section 8, Ferdydurke) first opened the now-shuttered Belleville at the end of 2014, he took inspiration from the dive bars he visited in Paris.

A few years down the line, Salt and executive chef Jarrod Moore took a road trip through the American South, travelling through Louisiana, Tennessee and Mississippi, and their vision changed.

“We went to a bunch of dive bars, burger shacks and barbeque places,” Moore says. “When we got back, we thought, 'Man, we saw so much awesome, fun, crazy stuff over there. How can we translate this into something for Melbourne?’”

After a refresh last year, Belleville quietly closed. Now Globe Alley has opened in its place, and like the other venues under Salt’s belt, it sticks to what he knows and does best: excellent burgers, fun cocktails and live music.

Three nights of the week you’ll find a band on stage, or a DJ playing anything from 1970s Aussie rock hits to ’80s-era New York City punk rock and ‘90s hip hop. The team has already hosted a secret show for New Jersey punk-rock band Screaming Females, an after party for George Clinton’s Parliament Funkadelic, and had three-hour lines for band-slash-YSL-models the Garden. Mondays are reserved for up-and-coming artists. Other days, Globe Alley is a quieter, more relaxed space.

In Moore’s kitchen, free-range meat and small-batch suppliers are king. "It's a big focus of ours,” Moore says. “While we're doing simple food, we're doing it properly and we're using the best products we can get our hands on.”

The De-Lux Burger involves an organic, house-ground short rib and brisket patty with fontina cheese and shaved black truffles. The Vegan BBQ Brisket burger is pepper-marinated, thinly sliced seitan that’s chargrilled and tossed with sticky, smoky barbeque sauce and served on a bun with pickled jalapeños and an apple and fennel slaw. And every day until 8pm there are $1 wings, and $1 vegan mock chicken strips.

There’s also smoked beef chilli con carne nachos, which are made with Doritos and served in the bag; deep-fried McClures pickles with ranch on the side; and triple-cheese jalapeño poppers. Some of the best-loved bites from Belleville also make appearances on the menu, including the poutine: thin-cut fries topped with barbeque-chicken gravy, melted jack cheddar and hot sauce.

"I think if we tried to take it off the menu, there’d be riots,” Moore says with a laugh.

Cocktail-wise, The Dead Flamingo is jalapeño-infused tequila, frozen cubed strawberries, salt and lime. The Kickstart My Heart is Globe Alley’s tropical take on an Espresso Martini, livened up with Jameson Caskmate whiskey, cold-drip coffee, coffee liqueur and coconut. Wines are mostly local, and beer on tap includes a special house lager from 2 Brothers.

To find the bar, follow the illuminated posters along the laneway, then duck under the neon X above the entrance. Inside, you’re greeted by more neon signage, gig posters and fairy lights strung up over the bar. The room is immersed in a red-and-blue glow, and an old chandelier hangs over the stage.

Where there were once murals and graffiti now there are black-and-white paste-ups of musicians and films from the ’80s and ’90s, from Wayne’s World and The Rolling Stones to A Tribe Called Quest and The Addams Family. A life-sized cut-out of Dolly Parton stands behind the DJ booth, and an altar dedicated to women in film and music, lit with tea candles, sits by the pool table, which is free to use all day, every day. 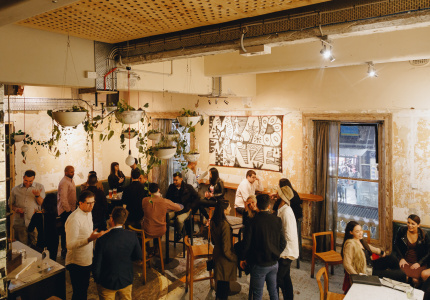 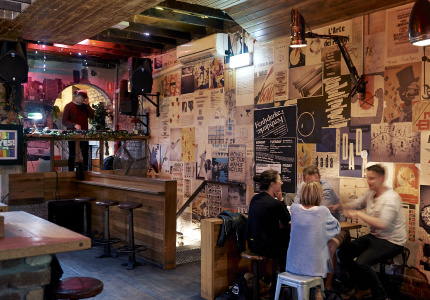