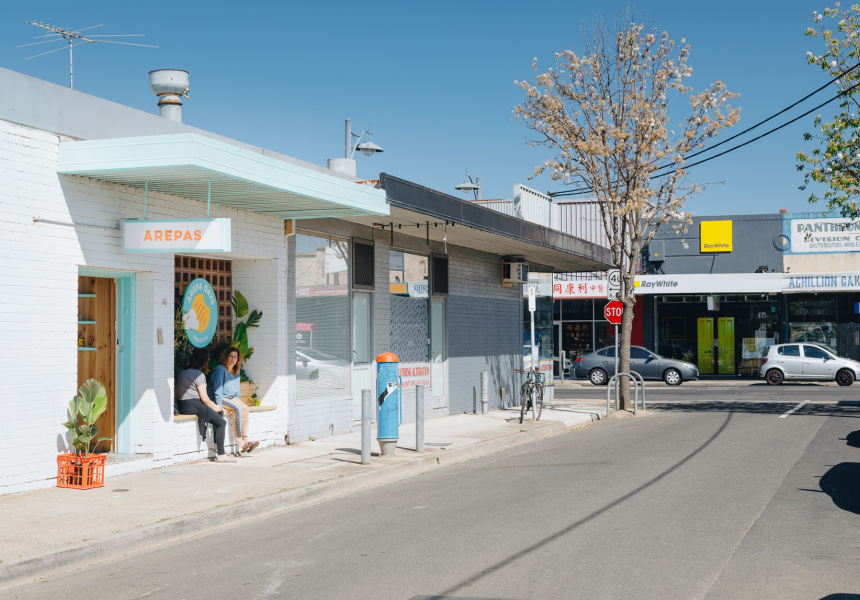 On a side street off Preston’s busy main strip there’s a sunshine-filled cafe so cheery in its yellow, white and aqua colour palette it’s almost therapeutic.

The dedicated arepa diner is the second South American cafe from Colombian-born Santiago Villamizar and Carolina Talero, the husband and wife behind Fitzroy’s Sonido. Arepas are a Colombian staple dating back to pre-Spanish colonisation.

“Every supermarket in Colombia has a massive arepa section,” says Villamizar. “Arepas are like bread. It’s used at home like toast … but these are less filling and they get a bit more crunchy, and you taste the corn.”

The pair spent eight months as full-time builders and carpenters renovating the former print shop from top to bottom before coating it in joyous colours. What Villamizar describes as a “war zone” when they signed the lease is now a small, lively room with an open kitchen and a turntable playing South American vinyl.

It’s much flashier than the nine-year-old Sonido, which is teeming with collected second-hand treasures.

“Fitzroy’s got its own vibe, we didn’t want to repeat the formula,” says Villamizar.

The pair moved to Melbourne 12 years ago, and spent their early years regularly visiting St Ali and absorbing coffee culture.

“In Colombia there [weren’t] cafes as such,” Villamizar says. “Here, they’re an institution. Everyone knows what a cafe is and how it works – it’s got a solid structure.”

The catalyst for the expansion to Preston was the need for an arepa prep kitchen, because arepas feature heavily on Sonido’s menu and are supplied to a handful of cafes around Melbourne.

The “Arepa Lab” and the dining room are separated by a glass partition made from old Art Deco-style window frames. Next to the open kitchen are three stacked sacks of dried Australian white-corn kernels. “We cook the corn, we grind it, we mix it [with water, salt and vegetable oil] and we flatten it. We’re making about 1000 arepas a week,” says Villamizar.

The dough is pressed into flat discs with an arepa maker (brought over from Colombia) before they’re crisped up on the grill.

On the menu there are 10 topped arepas including one with vegemite, guacamole and tomato, and one with scrambled eggs. Or create your own using black beans, chorizo, morcilla (black pudding) or “Old Clothes” pulled beef. “It’s a Cuban recipe. It’s shredded so it looks like old clothes. It’s very traditional,” says Villamizar.

Dishes are kid-friendly – Villamizar says authentic Colombian food does not have a lot of spice. The couple’s two kids (aged five and one) love the cheese-filled arepas.

You can also buy packaged plain or cheese arepas to cook at home – just throw them on a hot pan until golden.

Big jugs of Colombian hot chocolate are spiced with cinnamon and cloves, and you can add cheese for a salty-sweet hit, as Colombians do. There’s also raw sugarcane juice and fresh juices made from tropical fruits such as guanabana (“soursop”) and passionfruit, as well as coffee by Brunswick’s Wood and Co.

This article first appeared on Broadsheet on October 11, 2018. Menu items may have changed since publication.