Manager Jake Ellis has never seen the Bill Cosby-created cartoon series his new cafe shares a name with, though he is aware it exists. While the choice of name is somewhat naive given the American comedian's recent sexual assault convictions, when Ellis and owner Dan Grosman were conceptualising names, Fat Albert just “felt right”.

“It came about because we’re in Albert Park, we’re off Albert Road,” says Grosman. “The building is also this weird, fat sort of shape. We first realised there was a link when the builder came in. He suggested adding some lettering to the benches that said ‘hey hey hey’. I wondered if it sounded a bit controversial but we went ahead, as we thought it was a nice kind of ‘hello’.”

The airy, pastel-hued cafe is the second for Ellis and co-owners Grosman, Simon Mostafa and Ryo Doyama. The team also owns Punchbowl Canteen, in an industrial Port Melbourne backstreet.

“We love the bit-out-of-the-way area,” says Ellis. “I think that’s kind of our vibe: catering to people in our area rather than the world.”

The menu is influenced by his Japanese upbringing and borrows from Californian cuisine, too. Try salmon poached in green tea presented with blue swimmer crab, brown rice, radish, nori and roe. And sourdough toast spread with yuzu-spiked goat’s cheese and topped with mushrooms cooked in miso and kombu butter.

The California Toast is a “deconstructed then reconstructed” California hand roll: it’s made with avocado and salmon with mayo, wasabi oil and a poached egg. Panko-crumbed chicken katsu is sandwiched between slices of “the softest whitest bread” with shredded cabbage and Bull-Dog brand tonkatsu sauce.

Fat Albert sits on a residential corner that was previously the now-closed Truman Cafe. Ellis jokingly refers to the decor as “50 shades of salmon”.

There are peach and terracotta hues throughout, from the walls and floor to the tables, lampshades and even the espresso machine. Touches of navy on window frames, staff uniforms and ceramics offer contrast.

For a cosy corner spot it feels roomy inside. Light pours in from windows looking onto a heated outdoor seating area flooded with families and their dogs on the weekend. There’s even a “Dog Perignon” water station, which offers a photo opportunity as well as a reason to chat to your neighbour.

“A cafe should be where everyone comes and knows each other,” says Ellis. “It should be something very familiar, something like a third home.” 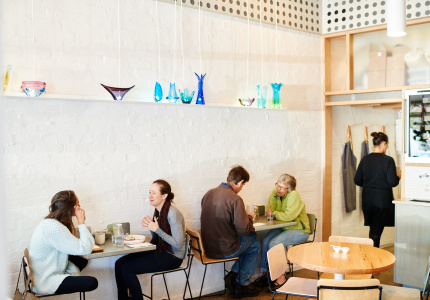