Now Open: The Alphington Social Is a Family-Run Italian Diner in an Old Bank, With an Entire Wall Dedicated to Cheese

Head in for woodfired pizza, pillowy ricotta gnocchi and an all-Aussie wine list, from the brother-and-sister team behind Fairfield cafe Mr Wednesday. 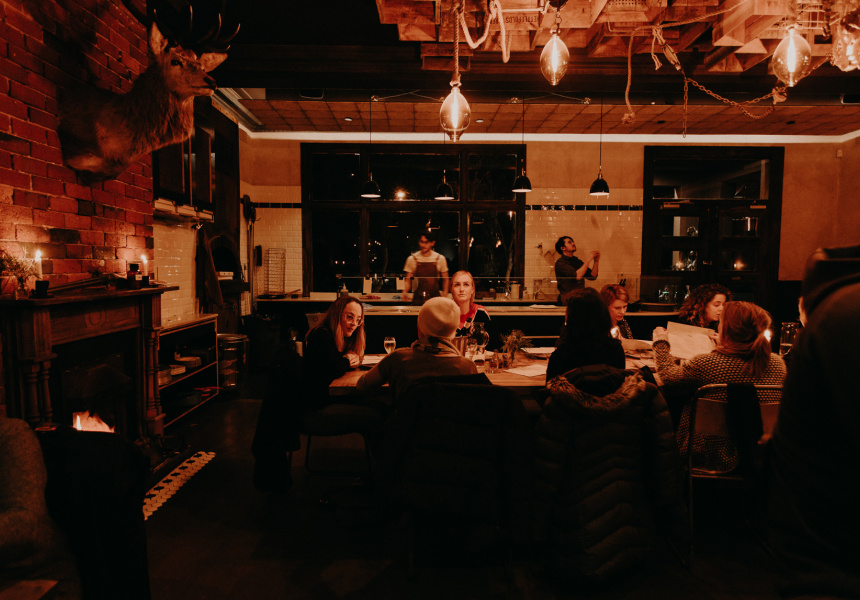 Brother and sister duo Dylan and Maddy Breen had always wanted to open a bar. So when the owner of Thai restaurant Paladarr, in an old bank building in Alphington, told them he was closing his business, they couldn’t pass up the opportunity to take over the space.

“Me and a group of friends used to hang around the area, visiting the Darebin parklands and the surrounding neighbourhoods for parties,” says Dylan. “But we always felt that it was starved of something funky and cool.”

The Breens, also behind Fairfield cafe Mr Wednesday, opened The Alphington Social in July. The Italian diner’s menu is broken up into three categories: cucina (from the kitchen), pizza and cheese.

Head chef Matt Dudman came over from Mr Wednesday to run the kitchen. Begin with snacks, or cicchetti, such as bone marrow with bacon marmalade, mozzarella polenta chips with romesco, and the day’s arancini – when we visit, it’s roasted cauliflower with provolone. Next, pasta. Pillowy ricotta gnocchi comes with a mix of mushrooms (king oyster, enoki and button), wild garlic and a smoky chestnut sauce, topped with watercress and crisp sheets of parmesan.

Dylan is the main pizzaiolo, and tonight he’s experimenting with adding beer to the dough, which adds a malt flavour. He learned the trick for a crisp crust with a soft, doughy inner while working at Ivanhoe’s Pizzami woodfire shop, earning extra cash during his early carpentry apprenticeship days.

“Everything is mixed by hand with a leavening time of 24 hours, minimum,” he says.

Try the broccolini and pork sausage combo with olives, chilli and garlic. It’s wood-fired at around 300 degrees before stracciatella and kale are added. A simpler burrata, tomato sugo and basil option will have you mopping up the creamy cheese with your pizza crust.

The cheese fridge takes up one entire wall. Go for the house selection with condiments that might include pickled octopus, lamb rillettes and quince paste – perfect for a grazing, wine-sipping afternoon – or choose your own from the huge selection that includes locals, such as the Calendar Cheese Company, and French varieties including Papillon Roquefort, which is aged in caves and has a buttery, spicy finish.

Dylan and Maddy completed the re-fit themselves. It’s largely influenced by their family’s love of vintage and antiques.

“Our family home in Merrijig is basically a cabin vibe,” says Dylan. “[And] we ride vintage motorcycles.”

Black lettering spells out “cheese” and “bar” on strips of white floor tiles, and a taxidermy stag head is guardian to the open fireplace, which is fitted into an exposed-red-brick wall. Recycled metal milk crates and wooden fruit boxes tessellate on the ceiling above, and lights are draped lazily around the room with rusty chains, old ropes and pulleys, all salvaged from Facebook Marketplace and the family’s property.

“We had to be pretty thrifty,” he says. “That was the fun part, working out how we could get everything to come together.”

A long wooden table dominates the main part of the restaurant, creating a communal, familial vibe, and there are leather banquettes, too. Dylan built most of the tables himself, with advice from his parents, who are shopfitters.

“I’ve learned a lot from them. It’s been a big family affair getting this place running,” he says.

It took three days to knock through the old bank’s thick concrete vault, and it now houses the bar, built using long timber planks found at a friend’s property. Old Mornington Peninsula wine barrels are repurposed as both shelves for bottles of spirits and as extra furniture in the 60-seat courtyard outside. Bunches of wildflowers are dotted around the restaurant, and the soundtrack is old-school jazz.

An all-Australian wine list follows a “no-wank approach”, according to Dylan.

“We choose good Aussie wines that pair exceptionally well with the food, rather than picking French or Italian wines for their name or location,” he says.

There’s also La Sirene Season Ale rolled by the keg from the brewery across the road, a few other local beers, and Bonamy’s apple cider on tap.

This article first appeared on Broadsheet on September 10, 2019. Menu items may have changed since publication.