Marked by minimal signage, and just up the road from the Queen Vic Market, 279 specialises in modern takes on traditional Japanese sandwiches and excellent filter coffee. For dessert, grab a Mochinut (a mochi doughnut) or a black tea creme brûlée. Australians are no strangers to excellent Japanese food. Most of us have enjoyed enough teriyaki in our time, navigated a sashimi plate or two and weighed up hot versus cold sake. But lesser known here is musubi – and that’s what West Melbourne eatery 279 is here to change.

Marked by minimal signage, the corner cafe is just up the road from the Queen Vic Market. Its owners are Austin Allen and Kantaro Okada, two best mates turned business partners. After collaborating last year on ADJ, a pop-up store and cafe a few blocks away, the duo decided to open a more permanent venture.

279’s menu serves musubi, which is like a Japanese sandwich, also known as onigiri. Seasoned rice replaces Wonder White. It’s shaped into a triangle and topped or stuffed with a variety of fillings, then wrapped in nori. It’s usually eaten by hand and can be found in lunchboxes around Japan.

The rest of the menu is made up of small side plates from a kitchen headed up by Okada’s mum, Manami Okada. Manami, who owns restaurants in both Japan and New Zealand, is a smiling five-foot-nothing musubi queen who runs a tight, tiny kitchen and is proud to be sharing her family recipes.

“We got these recipes from my mum’s grandma, so it’s really homely cooking,” says Okada. “It’s not truly authentic because we play around with Australian produce too, but we’re confident in the dishes, because my whole family has been loving them for such a long time in Japan.”

Choose from green beans with soy and sesame, eggplant in bonito dashi, and smashed tofu with shiitake and shumeji mushrooms. On the sweeter side of things, the Mochinuts (mochi doughnuts) are satisfyingly chewy and the black tea creme brûlée is soft-set and smooth.

The menu show stopper, though, is the pour-over miso, which you can get at a dedicated bar. Here miso is the main event rather than a side dish, and you can customise it to your taste.

First, choose from shiro (soy and rice koji miso), awase (soy, rice and oat miso) or kome (rice miso) pastes, then pair with one of two broth bases: either traditional bonito or a vegan broth, made with kelp from Port Phillip Bay. The paste is weighed, then the broth is poured on top and served with seasonal vegetables.

Allen looks after the filter coffee from behind a handcrafted brew bar of his own design, thanks to his past life as a cabinetmaker. “Of course, we love espresso, but when we were dreaming this place up we really wanted to make filter a feature,” Allen says. “For me, it’s a flavour thing. When you have good filter, it stays true to the terroir of origin.”

Allen is striving to bring the world’s best to 279 with a rotating roster of local roasters and Japanese imports, and a selection of beans from Kenya, Ethiopia and Colombia, among others. “By expanding our source of coffee to the whole world it really makes us think about what we’re serving and why,” he says. “Because in the end you have unlimited choice.”

The fit-out is a mix of Melbourne minimalism and traditional Japanese design. Everything here has its place, from the considered plating to the customary oshibori (hot hand towels). And the building itself is a beaut; its floors were stripped of several linoleum layers to reveal its heritage charm.

While 279 might be a small space (it seats just 25 inside) that doesn’t mean its owners aren’t dreaming big. Allen and Okada have plans to expand before summer, adding 15 outdoor seats and converting the second storey into a shop stocking Japanese handicrafts, ceramics and single-origin teas.

“Sure, rice and coffee don’t normally go together the same way as pastry and coffee,” says Okada. “But Australia and Japan do go together, and we have done for a long time. We just want to be the place where people can come for both.”

This article first appeared on Broadsheet on September 17, 2019. Menu items may have changed since publication. 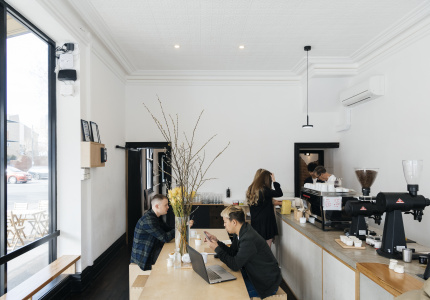