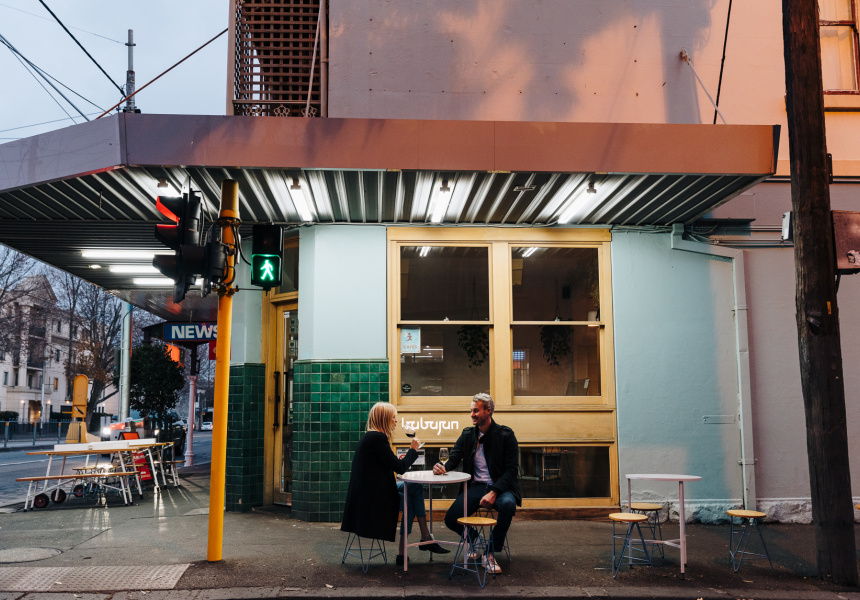 Babajan opened in mid-2016, when head chef Kirsty Chiaplias (The Workers’ Food Room), teamed up with Ismail Tosun, former owner of Gigibaba, to bring modern Turkish and Middle Eastern brunches to a corner cafe in Carlton North. Now Babajan is breaking into the dinner scene.

The pair had toyed with the idea of dinner service for some time, hosting test runs for regulars to trial the concept.

“Regular customers are good because the give you feedback – they give honest feedback,” says Chiaplias. “And they’re in every day, so they’re like part of the family.”

Tosun is no longer involved with the restaurant – he left to start a new business – so Chiaplias developed the current menu herself.

“Most people think we just do a great breakfast, one that people may not have had before,” Chiaplias says. “But there’s so much more that the team is capable of.”

While Babajan’s brunch menu could easily have been adjusted for dinner – Chiaplias jokes that you can “just take the poached eggs off” – patrons can expect more elevated fare at night.

Starters include shaved pastirma (cured, air-dried beef), oysters with pomegranate, and hummous with pinenut butter. Mains will centre around barbequed proteins such as chicken with preserved lemon and romesco, pickled octopus and lamb kofte. Babajan’s counter salads (a “creative outlet” for the team) will be carried across to night-time, too.

“It’s a big Turkish experience,” Chiaplias says. “The salads will be more refined, but the focus will be the barbeque and the proteins. It’ll just be a marriage.”

While the rose, cardamom and mastic rice pudding is currently the only sweet option on the brunch menu, dinner service lets Chiaplias dabble a little further in dessert. She’s developed a walnut baklava, a delicately flavoured rose and almond macaroon and chocolate and pistachio truffles.

If you’re unable to swing by for dinner, Babajan’s salads are available to take away.

“I found a lot of my regulars were swinging past around 4.30pm to get salads to add to their dinner,” Chiaplias says. “One lady even pretends she makes them to impress her guests.”