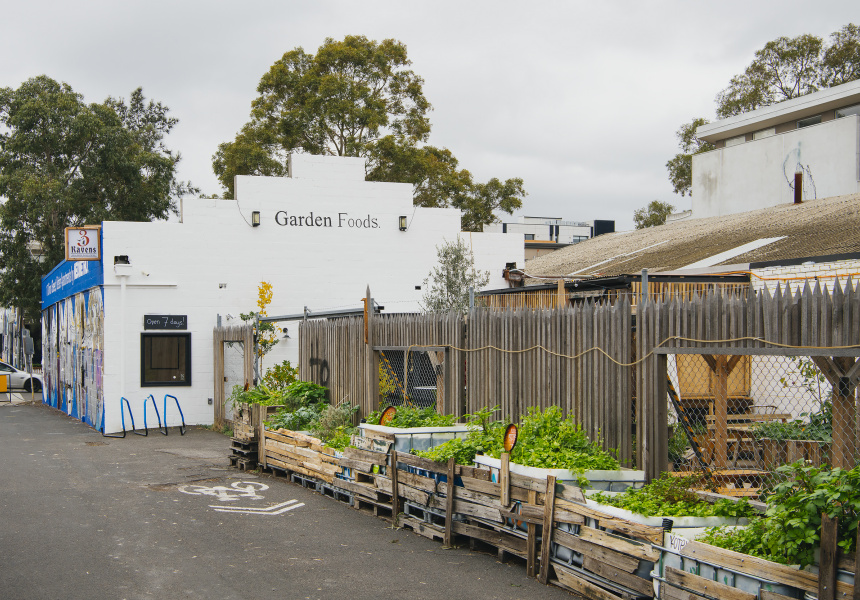 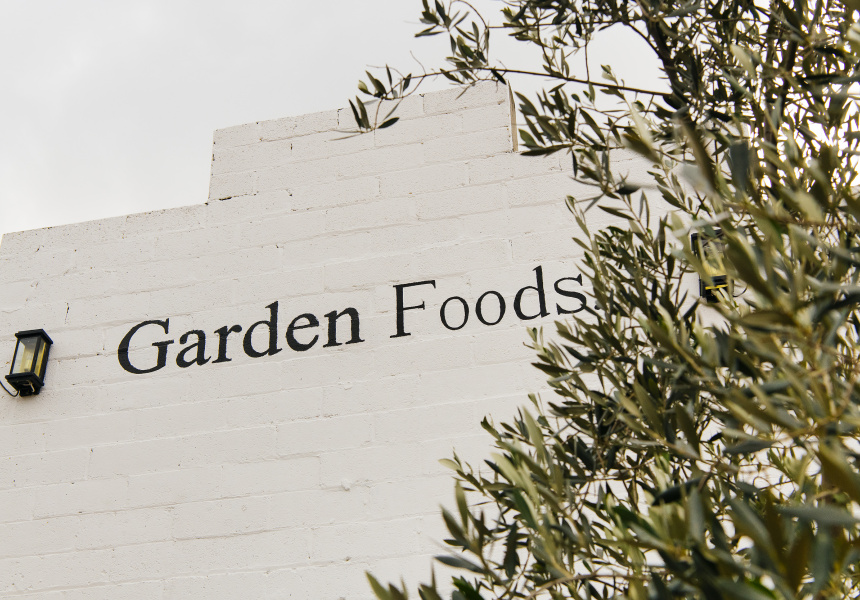 Ryan Parker is a bit of a Renaissance man. He’s a cook, a landscape designer, a carpenter, a painter and spent years creating temporary festival set-ups and building structures for events. All of these skills have been rolled into his “nomadic cafe” model, Garden Foods, which is currently based opposite Jewell Station in Brunswick.

“I’m thinking of it as an event that goes for ages,” Parker says. “Most cafes have a life span. I don’t like the idea of being permanent. I’d rather activate unused spaces that otherwise might be an eyesore.”

Garden Foods currently occupies a small building – formerly home to cafe, Nice One – and a spacious outdoor area full of salvaged crates, long timber tables and, naturally, garden beds. Parker originally used the space for Garden Lords – a beer-and-barbeque joint – in summer 2017, but converted it into a cafe for the cooler months.

The outdoor pergolas come from festival marquees and all the planter boxes, tables and chairs are fold-up, designed to be mobile. Inside, there’s an inviting, laid-back feel, from the open counter to the mix of small tables and communal coffee bench in the dining area.

Parker planted everything that grows in the garden, including snow peas, garlic and cumquat (the zest of which is used in the carrot cake), plus herbs such as parsley, dill, coriander and mint. People are welcome to pick herbs as they walk past (and many do).

All produce goes into the menu, which focuses on home-style comfort foods with a healthy bent. Think of house-made sausage rolls, soups, slow-cooked casseroles, lamb shanks – the kind of dishes that take time to prepare, but you might not have the hours or patience to do yourself.

Crowd favourites are the espresso beef pie, kangaroo bolognese and the curried pumpkin soup – “it’s an easy pleaser because it’s vegan and gluten-free,” Parker says. He loves the “spuds” section of the menu, which heroes a hot potato with various toppings. He boils, bakes and fries them. “Something magical happens in a potato when it’s thrice-cooked.”

A highlight of the outdoor space is a colourful mural painted by Parker, depicting the moment that inspired the Kev Carmody and Paul Kelly song, From Little Things Big Things Grow: Gough Whitlam pouring soil into the hand of traditional landowner Vincent Lingiari in 1975.

The current incarnation will stay until at least the end of the year, but “hopefully until next summer,” Parker says.