The brunch game here is strong, but the sandwich game is even stronger. We rolled up our sleeves and ate every sandwich on the menu, including one that’s generating heated gravy-related debate: to pour or to dip? 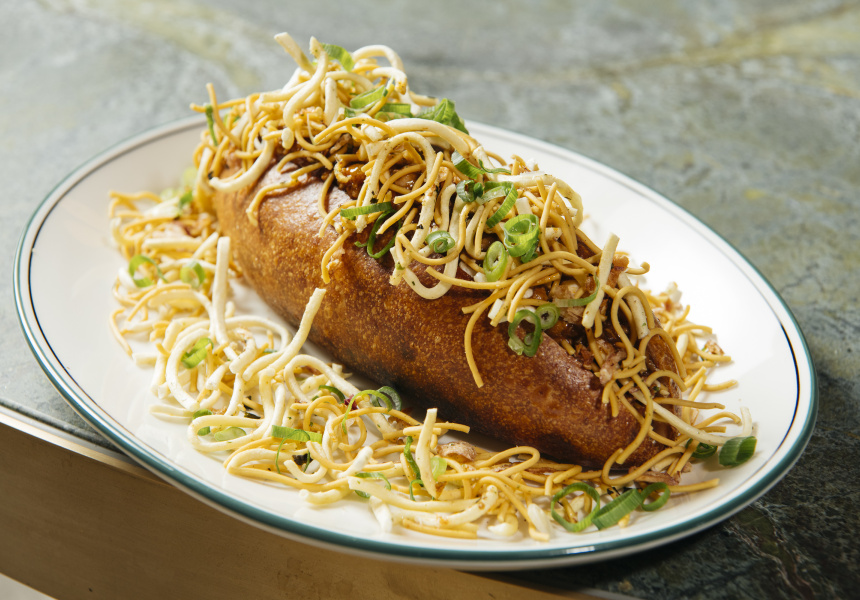 Liminal, the refined new city eatery from Melbourne-cafe notables the Mulberry Group (formerly Higher Ground, Kettle Black, Top Paddock) opened just over a month ago, but has quickly garnered a reputation for reinventing the lobby cafe as a dining destination.

But what’s perhaps most exciting for the Collins Street lunchtime crowd is the next-level sandwich menu, which ranges from pumped-up classics (such as a superior hot chicken roll) to new favorites (the ma-po-tofu sub will do a number on your shirt cuffs).

Hot chicken roll with gravy ($16)
A long roll of pillowy white bread stuffed to the brim with shredded rotisserie chicken is already a pretty exciting lunch scenario. But this particular chicken roll is a cut above. The rotisserie chicken comes from free-range ethical producer Nichols Poultry in Sassafras, Tasmania, and the bread is a slow-fermented sourdough brioche from Zeally Bay.

Most importantly it comes with its own gravy boat, which is filled with a generous measure of excellent chook gravy. It’s velvety and intensely chicken-y, and makes a strong case for gravy on everything. Executive chef Martin Webster says it’s generating a bit of heated debate among customers: Do you pour? Or do you dip?

Ma po tofu and noodle bun ($15)
It’s a bit of a controversial move, putting a Szechuan mainstay on a sandwich. But it works, and Webster says it’s already developed “a bit of a cult following”.

The ma po itself is a family recipe – a fairly traditional mix of silken tofu, finely minced pork and Szechuan pepper – coaxed from Webster’s friend’s mother.

“We haven’t pulled back on it, it’s a proper Szechuan flavour, so it’s hot and numbing as well – you kind of get a buzz off it,” Webster says. That tingling is balanced by the soft white roll, a perfect foil to the intensity of the filling, which is topped with fried noodles, providing textural contrast. It’s a brilliant but messy lunch option. Roll up your sleeves.

Porchetta, apple, fennel, radicchio ($18)
The porchetta in this dish, which comes from swanky butcher Meatsmith, is cranked on the rotisserie for hours until it has a glistening, crisp exterior.

Webster keeps the pork moist by deboning it, spicing it, reassembling it into a kind of roulade, then wrapping it in golden crackling. When it’s done, the meat is crammed into a ciabatta bun, with salty crackling shards contrasting against a decent hunk of rich, garlic-scented pork, and a sharp fennel salad to cut through.

The result is crunch and juice in equal measure. You can also order the same porchetta straight up with a selection of sides, sans-sambo, but it really shines in sandwich format, recalling the simple porchetta rolls sold out of vans in Italian markets.

Fritto misto sandwich ($18)
This is a simple variation on another Italian classic; a salty and clean riff on the time-honoured fritto misto di mare (mixed fried seafood). It’s a lighter option than the “fritto” implies, the seafood lightly dusted in semolina before frying. It’s finished simply with a couple of house-pickled anchovies or sardines, lemon, house-made aioli and rocket.

Webster developed this dish to showcase local and sustainable seafood from places as close to Liminal as possible. “Whenever we can, it’s coming from Port Phillip Bay,” he says. That means you’ll always find squid and mussels, but otherwise, the generous tangle of seafood is totally seasonal, and determined by whichever fish are unluckiest on the day.

Pair it with a citrus-heavy Paolovino pinot grigio and pretend you’re lounging on a terrace overlooking the Adriatic.

Fried eggplant, provolone, honey miso ($15)
Somewhere between an eggplant parmigiana and a katsu sando, this vegetarian number wedges mild, sweet provolone between two eggplant slabs that are crumbed, fried and served with a house-made chickpea, miso, mayonnaise and honey condiment.

Mozzarella, sage and anchovy toastie ($15)
“Salty and cheesy is really all you want in a toastie,” says Webster, and this one meets both of those requirements. The anchovies bring an intense zing to the oozy mozzarella, and whole sage leaves – pan-fried until crunchy and buttery – are pressed into the soft white Zeally Bay sourdough during grilling. It looks deceptively simple, but the elements combine into something special.

Grilled mortadella ($16)
This distant cousin of the bacon and egg roll is the hangover sandwich of choice. It’s on both the breakfast and lunch menus, meaning you can get your hands on it from 7am until well into the afternoon.

Most of us are familiar with mortadella in the form of thinly-shaved slices on a charcuterie board. Here it’s cut thick and cooked like a steak, which gives it an outer crust and means the fat melts nicely in the centre. In place of an egg, it’s finished off with a good amount of nutty, browned-butter hollandaise. Vinegary radicchio and house-made hot-and-sour pickles keep the richness from being overwhelming.

Chickpea fried-chicken burger, hot-and-sour pickles ($18)
Eat a quality burger in America and there’s a good chance it’ll be served on a potato roll like this one. Light and buttery and with a hint of roast-y spud flavour, it makes a perfect vehicle for chicken thighs that are coated in chickpea flour and fried until dark amber.

The burger is finished with kewpie mayo and pickles that pack a bit of heat. In contrast to some of the more creative options on the menu, this one’s a stone-cold classic. Add a side of chips for $6.

Webster says the sardine bagel was developed as an alternative to the classic salmon-cream-cheese version; an option for those who enjoy preserved fish in the morning but fancy breaking out of the smoked-salmon hegemony.

This article was first published on June 25, 2019. Menu items may have changed since publication.