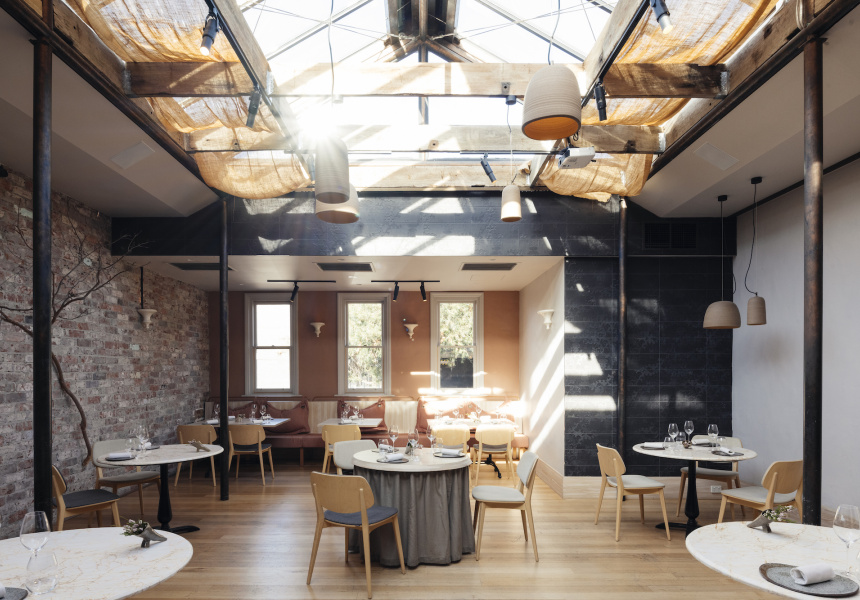 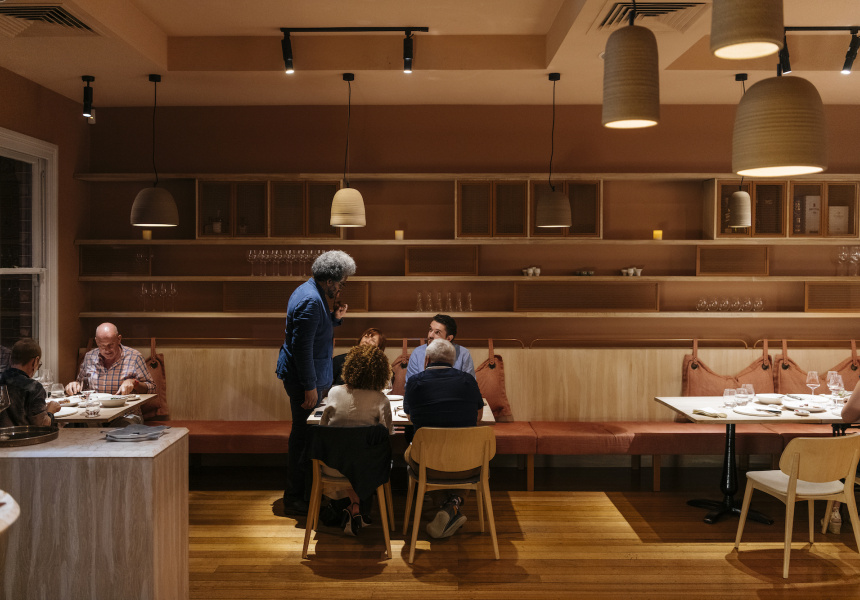 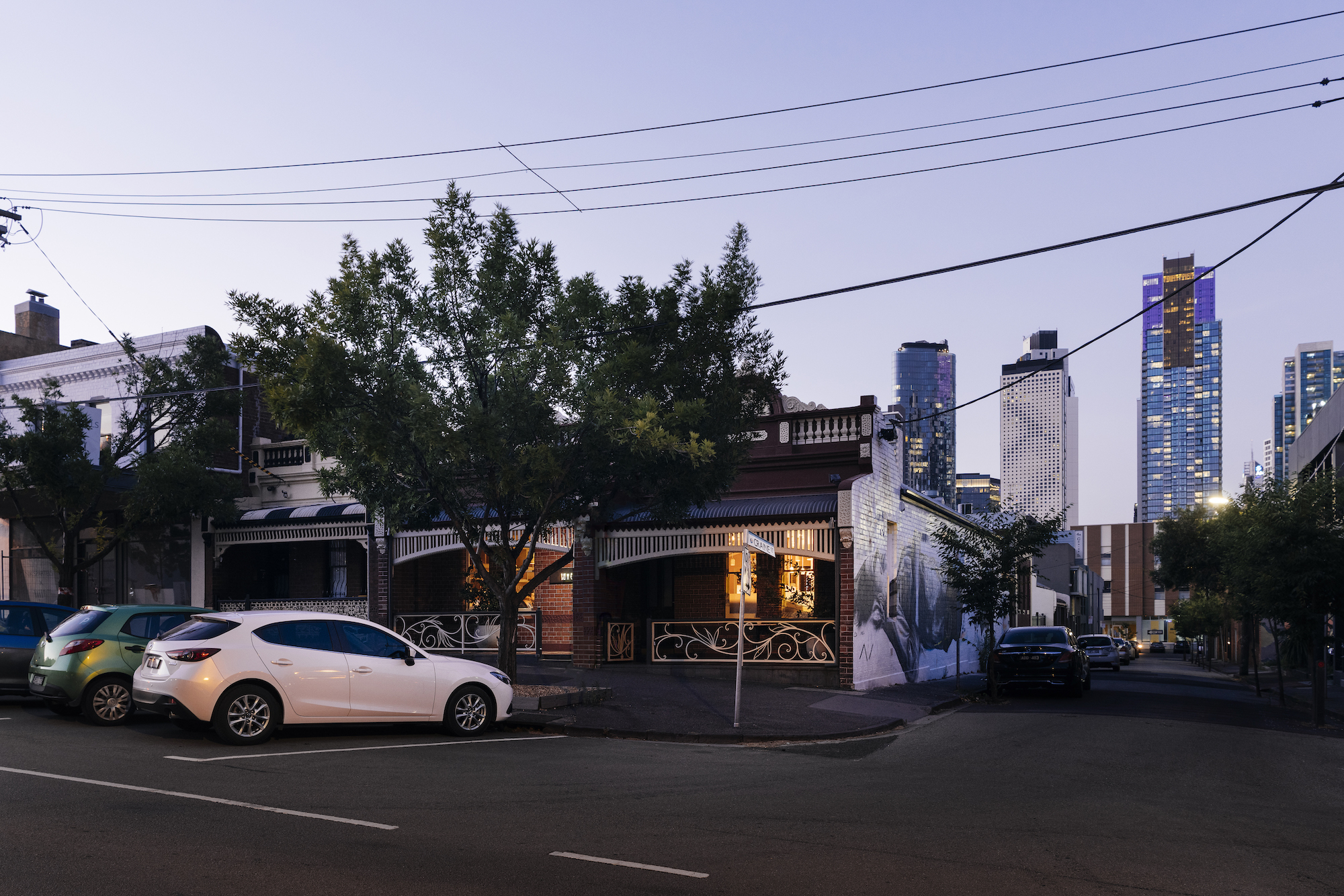 “Fourteen to 15 course-plus tasting menus are on their way out,” says new executive chef Rivera. “The way Shaun and I see it, Melbourne doesn't really have the established culture for that. Europe has, and America has. But in Melbourne we’re all about just having fun, sitting down with your mates, and having some really good food.”

Lûmé resides in a Victorian townhouse that once served as a burlesque venue. Richly textured, peach-coloured walls are detailed with cave paintings of hunter-gathers. These walls give way to original brickwork and blonde-wood joinery. Plates and knives are emblazoned with the diacritic ˆ and ´ of the venue’s namesake, while Quade and four other key staff have the marks visibly tattooed. Detail reigns supreme. There’s even complementary beard oil in the men’s bathroom.

This interior remains largely unchanged in the 2019 reboot. Although the space now seats more (80) diners, and there’s the option to sit at the bar. The music has been cranked up ever so slightly, giving the effect of a more bustling, and less stuffy, dining space.

The big change: Lûmé’s menu is now available in three, five or seven courses, priced at $100, $140 and $170 per head, respectively. The extravagant whimsy of Quade’s 14-courses (“It looks like X, but tastes like Y!”) is gone, for now. What’s on show is chic and accessible food that defies any one cultural influence.

“The new menu takes inspiration from a whole lot of things,” Rivera says. “Mostly my Filipino upbringing and pastry training. And probably just flavours that I like. Growing up in the western suburbs of Melbourne, I got to see a really multicultural community. I had a lot of Indian, Maltese and Italian best friends growing up. That’s kind of shaped my flavour memory – how I taste and how I eat.

The shiniest highlights of Rivera’s seven courses include barbeque pork strip glazed in black banana, rolled up and pierced theatrically into a twig; calamari hiding cheekily under cucumber, chrysanthemum and charred coconut; Great Ocean duck, its leg, breast and heart topped with bright, seasonal berries; and a mango dessert with yoghurt, hops and crystallised saltbush, best described as a couture Weis bar.

Along with the remaining courses, palate cleaners and petit fours, these dishes trot out in a slow and considered fashion that (miraculously) feels uncontrived. The staff is impeccably knowledgeable and genuinely passionate. Wine, sake, beer and cocktail pairings elevate each course and at times rival Lûmé’s kitchen in their ingenuity.

While developing this new vision, Rivera felt he had big shoes to fill – “both figuratively, and literally” – in succeeding Quade. But even at the humble age of 25, he is clearly up to the task.

In 2012 Rivera studied pastry-making before starting at Neil Perry’s Rockpool Bar & Grill as a waiter. He then moved behind the pass, spending nine months in the kitchen as a junior pastry cook. Rivera relocated to Sydney to Rockpool’s flagship, where he spent 18 months honing his skills in the savoury arts. Feeling homesick in 2015, Rivera returned to Melbourne. After short stints interning at Brae and Attica, he found a home in the newly opened enigma Lûmé, spending two years under Quade’s mentorship. Rivera then moved on to Amaru as chef de partie, while landing the Gault & Millau Young Talent of the Year award in 2017, and San Pellegrino Young Chef of the Year, Pacific Region, in 2018.

Quade saw Rivera as the very best choice to helm Lûmé’s next iteration.

“I'm honestly really excited to see where Lûmé goes next,” Quade says. “Because John, well, he’s the oldest 25-year-old I know. So there's a lot of maturity in the food. A lot of thought and analysis has gone into each piece, and it's a totally different style to my old menu.

“I got to take a lot of pressure off John with the business side of things. I just let him focus on putting out a cracking menu, developing a culture in the kitchen. Any head chef has to create a really good workspace. Because once you have that, you’ve got a happy team, which makes happy customers.”