A New Dedicated Food Precinct Is Coming to the West

Grazeland will be home to 50 food vendors, three bars and a space for local designers. 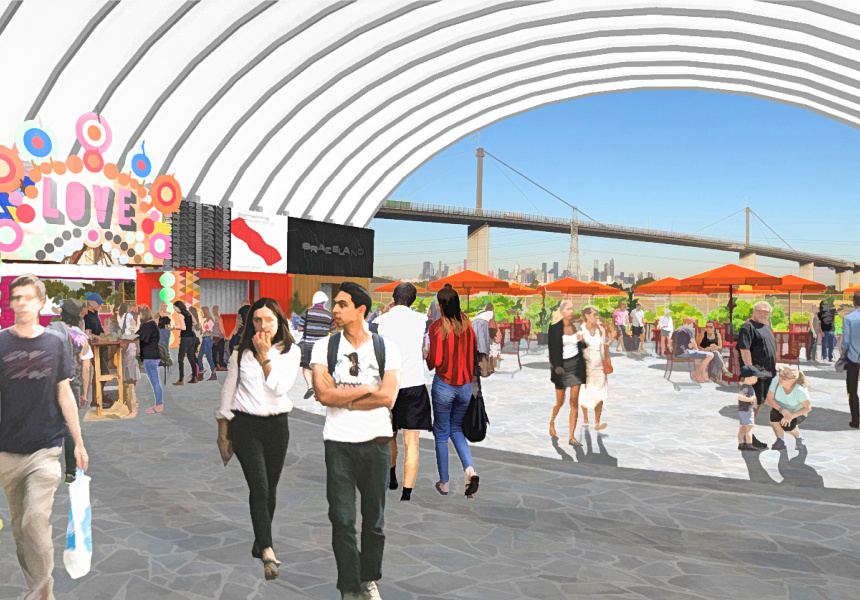 Spotswood will get a dedicated food precinct early next year, when Grazeland opens next to Scienceworks.

The 10,000-square-metre space will house 50 food vendors, three licensed bars, two stages and a large screen, with room for local designers and craftspeople to show off their wares. All consumables at Grazeland will be compostable or recyclable, so nothing goes to landfill.

“It used to be the old OCI bottling plant, which was knocked down and decommissioned over the last 10 years. It’s just been a cement shell sitting there,” says Grazeland managing director John Forman of the site, which was originally set aside by the state government for an expansion of Scienceworks.

“Effectively it’s a big cement lump in an old industrial site, with a spectacular view of the city.”

Grazeland will open every weekend of the year, hosting live shows and roving performers. The space, which is being designed by Push Projects and Phil Bucknell of Milieu Projects, will have both outdoor seating and covered areas, plus several themed zones. The themes are yet to be decided, but first plans are being discussed.

“There’ll be a sweet zone, a savoury zone and a very large deck overlooking the city,” says Forman. Each of the businesses will have license to fit out the repurposed shipping containers they’re housed in. Tenants confirmed so far include 8bit burgers, 48h Pizza e Gnocchi Bar, Cripps Family Fish Farm and cannoli from That’s Amore.

“You can jump on a boat from Federation Square, and it takes 38 minutes to get to a public pontoon out the front of Grazeland . . . It’s a great way to see the city through to Spotswood, and then you can come right back again,” says Forman. “Our waterways are one of the [most] under-utilised tourist assets in Melbourne.”

Grazeland will open in March at 20 Booker Street, Spotswood.